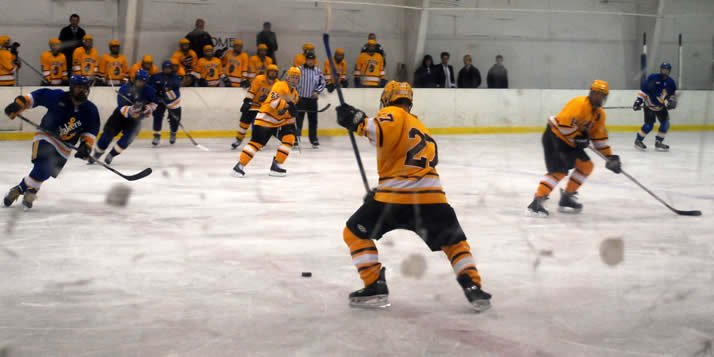 The Calvin hockey team spends one night a year taking orders and serving food at Russ’ Restaurant on 28th Street to support their program.

Normally the 28th Street Russ’ Restaurant, located about a mile from the Calvin campus, is not extremely busy on a Monday night.

But on this Monday night in mid-February most of the booths are taken. The restaurant is festooned with maroon and gold balloons, and the customers find that their food is delivered to their table not by the usual servers, but instead by a dozen or more college-age men, dressed in a variety of gray and maroon and blue t-shirts, almost all of which say “Calvin Hockey.”

The occasion is an annual event, usually held in February, at which Calvin hockey players take over serving food for the night. The tips they receive provide a much-needed supplement to the team's budget.

As a club team, said Calvin head coach Mike Petrusma, the hockey program enjoys good support from the college—from both the athletic department and the student body—but its budget is not equivalent to those of various Calvin varsity sports teams, so creative fund raising is a must.

Looking around Russ’ at the crowded tables and hustling players, the veteran coach says simply: “This is fantastic.”

“I gotta go,” he says. “Need to pick up the jerseys for the game tonight.”

Why is that your job, someone asks him.

“Freshman,” is his simple, one-word reply.

Fetching the uniforms on game day at Calvin is a tradition for the team's first-year players.

Luckily for Loney he had a lot of company this year in the uniform-lugging duties as the Knights counted nine first-year players on their 25-man roster in 2008-2009, a number Petrusma said was among the most rookies he's ever had.

Calvin vs Delta for ACHA berth

The next night, in a Saturday evening contest, just five days after serving food to Calvin fans, the Knights are looking to serve up a “W” in the finals of the American Collegiate Hockey Association North Region tournament.

The night before Calvin had bested Lansing Community College by a 6-2 score to improve to 16-8 overall after a 1-4 start. This night it’s Calvin vs. Delta Community College, a two-year school located in Michigan’s thumb, almost smack-dab in the middle of the triangle formed by Saginaw, Midland and Bay City. It’s the first meeting of the year between the two schools (they play in different conferences) with the winner securing a trip to the ACHA national tournament to be held in early March in Rochester, N.Y.

Although Delta is a community college it is a member of ACHA Division 3, which is comprised of four-year colleges such as Calvin as well as small smattering of two-year colleges.

Calvin has been an ACHA member since 1994 and has competed in its conference, the Michigan Collegiate Hockey Conference (MCHC), since it was established in 1991 as a four-team league: Calvin, Grand Valley, Northwood and Lawrence Tech.

And while all the acronyms can become, said Petrusma, a bit of an alphabet soup at times, what he lets recruits know is that ACHA hockey is a well-run, legitimate and worthwhile option for high school players looking to continue their careers in college.

“The ACHA has done a good job creating a good brand of hockey,” he said. “We have over 100 teams playing at the (ACHA) D3 level this year—teams in California, Arizona, New York, Pennsylvania, North Carolina. Our conference is outstanding. I think in any given year a team from the MCHC is capable of winning the national championship.”

Indeed five years ago Calvin was one of those teams, taking home the national crown in 2003-2004 with a win in the title tilt against the University of Georgia in a national tournament played in Arizona.

For Calvin each season begins with an expectation that the year will end with a berth in the ACHA national tournament. So the regional tournament championship game against Delta sees the Knights come out hard. The seniors on this year's team finished sixth in the nation in 2007, but stumbled to a 12th-place finish in 2008 and are eager to get back to nationals in 2009.

Loney has heard the seniors talk about nationals, and he’s eager too to make the trip. Playing for championships is a pursuit he knows a little something about. The Pittsburgh native was a member of two state championship teams in high school, and his dad, Troy Loney, a native of Alberta, played for 12 seasons in the National Hockey League. Troy Loney was a member of the Pittsburgh Penguins Stanley Cup Championship teams in 1991 and 1992 when Reed was just a toddler.

He was a hard-nosed competitor who racked up more than 1,000 penalty minutes in his 624 NHL games. “He liked to throw down the gloves a little,” his son notes with some understatement.

And while Reed Loney may have his dad’s grit, he was not blessed with his father’s size. So coming out of high school he wasn’t even sure he would continue playing hockey in college. Finding a place like Calvin convinced him to keep playing.

“I was looking for a college where I would get a great education,” said Loney, who is considering a history major. “I knew Calvin would be that place. And a Christian college was appealing to me. To have the chance to play hockey on top of all that was a really nice bonus. And even though it’s club hockey, we’re serious about it. We don’t sacrifice much, I don’t think, as a club sport.”

It's a sentiment echoed by his fellow first-year players, who made up Calvin's top five scorers in 2008-2009.

Caleb Bosma, a high-scoring defenseman who was second on the team in assists in 2008-09, grew up in Aylmer, Ont., and, like Loney, has been on skates since a tender age. He played a couple of years of Junior B hockey in Ontario, before looking at college options.

Although he loves Calvin hockey, deciding on Calvin, he said, was first about academics and faith.

“I know that my hockey playing days are numbered,” he said. “The ultimate reason for choosing Calvin was a life choice. I wanted people around me that would push me in my faith.”

First-year player Justin Blaauwendraat, a junior from Truro, N.S., who finished the season as the team's leading scorer, despite missing the final five games of the year with a knee injury, echoes Bosma.

He played Junior A hockey back home and then decided to end that part of his hockey life to come to Calvin to prepare for medical school. He was thrilled with how his decision played out.

“Academics to me are very important,” he said. “I struggled with the decision (to leave junior hockey) for a couple months, but when I came and visited Calvin and the hockey team here, what impressed me the most was the atmosphere at the rink and being surrounded by a group of great teammates. It was comforting to know that I could make great friends who all share the same passion for hockey and Jesus Christ at the same time. It's a great community where the professors care.”

Back on the ice in the Saturday-night title tilt between Calvin and Delta things unravel for the Knights in a one minute and 52-second stretch in the second period.

First Delta converts on a nice two-on-one break with 14:37 left in the period to take a 1-0 lead. Just nine second later Delta scores again as a puck bounces off the shoulder of a Calvin defender and changes direction before floating over the right shoulder of Calvin senior goaler Chris Pasma. Then, with 12:53 left in the second period, Calvin is whistled for a penalty, and, eight seconds later, Delta scores on the power play to put the Knights in a 3-0 hole.

Calvin, playing without Blaauwendraat, is able to cut the deficit to 3-1 by the end of the second period, and in the third they bombard the Delta cage with shot after shot, but none finds its way to the back of the net. Delta adds an empty-net goal in the final 90 seconds after Calvin pulls its goalie to gain a man-advantage. The final is a bitter 4-1 loss for the Knights.

So at 9 o'clock on a Saturday night, Calvin's players, after first shaking hands with the Delta team, slowly shuffle off the ice, dreams of a seventh-straight trip to nationals left behind at the Southside Ice Center, 15 miles south of the Calvin campus. And it hurts. Petrusma looks shell-shocked as he heads toward the Calvin dressing room.

Looking forward to next year

The next week the sting has subsided a little for Petrusma. And as he reflects back on the 2008-2009 season he finds a lot to be heartened by.

“We started off slow,” he said, “but then we picked it up. It didn’t end the way we wanted it too. We're used around here to playing into March. To not make nationals was disappointing. But we had a pretty solid year. And we're losing only five seniors. Don’t get me wrong; we're going to miss those guys. They’ve been really good for us. But we got a ton of guys coming back. Our top six scorers are all back next year, so that's something to look forward to.”

Blaauwendraat, Bosma, Loney and the other first-year players also are looking forward to next year—to the practices and the road trips and the home games with the stands filled with fans. And next year also will bring another group of first-year players, a group they can begin to instruct in the finer points of the Calvin hockey tradition, a new group of freshmen to lug the uniforms on game day and serve food at Russ’.