Calvin hockey gets a home 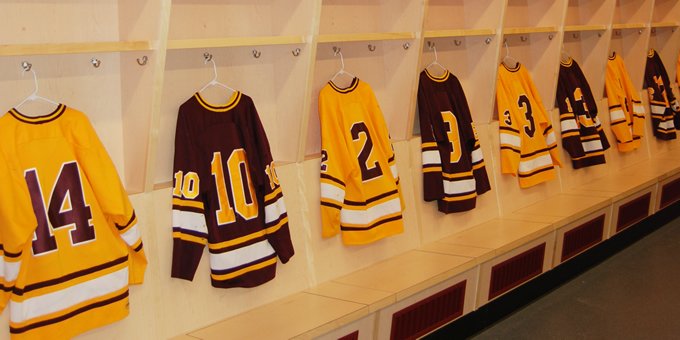 Standing in paint-splattered shorts in the middle of the new Calvin College locker room at the Eagles Ice Center (the old Jolly Roger Ice Club), Calvin hockey coach Mike Petrusma was at a loss for words. "At times I’m speechless,” said the 1985 Calvin alum. “I never thought that we would have a Taj Mahal like this.”

Petrusma is referring to the recently completed 1,200-square-foot home for the Knights, part of a 5,000-square-foot addition to the 38-year-old facility, which also includes locker rooms for visiting teams and the Grand Rapids Christian High School team. “Most schools have multiple rinks that they play at and don’t have any kind of home facility at all,” he said. “This puts us among the top-10 percent of (NCAA) Division III schools.”

It is the first real home for the Calvin hockey team, which has been in existence since 1973.  “This is a realization of a 40-year dream,” said Ralph Luimes, a 1983 hockey alumnus, who supported fundraising efforts and helped design the addition.  “This has been part of the vision for Calvin hockey ever since Jolly Roger was built. All of those years the dreaming never stopped, but the opportunity never presented itself until recently.”

The Jolly Roger Ice Club has served as the home ice for the Knights for several decades, but until last year they had no permanent locker room space. Last year, the Knights secured a few hundred square feet of an upstairs storage room in which Petrusma had installed a fan for ventilation purposes.

"Our coach kept promising that we were going to get a locker room,” said Calvin senior co-captain Bart Tocci, “but I never thought it would be something like this.”

As a freshman, Tocci and the team’s other underclassmen stored their used hockey equipment in the residence hall basements. “Basically we would stink up the whole basement,” said Tocci. “We got so many complaints from RDs and other students who said they felt nauseous from the smell.”

A year later, Tocci thought the problem could be solved when the hockey team got some storage space in the Huizenga Tennis and Track Center. “Then the track team started complaining about the smell on one side of the track; hockey equipment, for some reason, smells worse than any other kinds of sports equipment,” Tocci said.

Health concerns were also an issue, according to Petrusma, with the use of unsanitary equipment due to improper drying.

Tocci is especially glad for additional showering space.  “We don’t have to shower with the other team,” he said. “That can be pretty awkward after a game, especially if there was some bad blood between players. We used to have 40 guys from two teams using four shower heads. This is a big change.”

In fact, Tocci believes the facility is a huge selling point for the Calvin hockey program. “This is going to definitely tip some people over the edge about coming here,” he said. “I’ve been playing hockey since I was six years old; I’ll be 23 in November and I’ve never had a locker room this nice.

"We are so thankful to the donors and to Calvin for making this a priority; it’s a huge blessing.” Petrusma, too, was amazed at the support for the project by hockey alumni and other community members. “I’m so grateful for a space like this; to meet with incoming students here is tremendous. We’ve gone from being nomads to having a home.”

The $1.1 million addition (of which Calvin was responsible for $250,000) and partial renovation is phase two of a three-part renovation plan.  Future plans include new seating, glass and boards; updated lighting and more energy efficient ice-making and cooling. 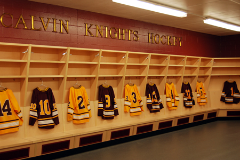 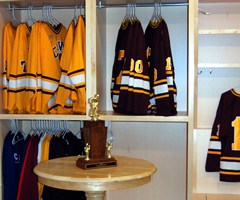 Detail of a player's locker space. 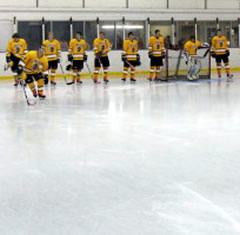 Waiting for the puck to drop. 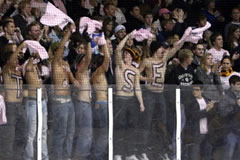 Hockey fans cheering on the Knights

The hockey program is dedicating some space in their new facility to the history of hockey at Calvin. If you have old hockey memorabilia, photos, statistics, even an old jersey that you would like to donate, please e-mail d3hockey@calvin.edu.