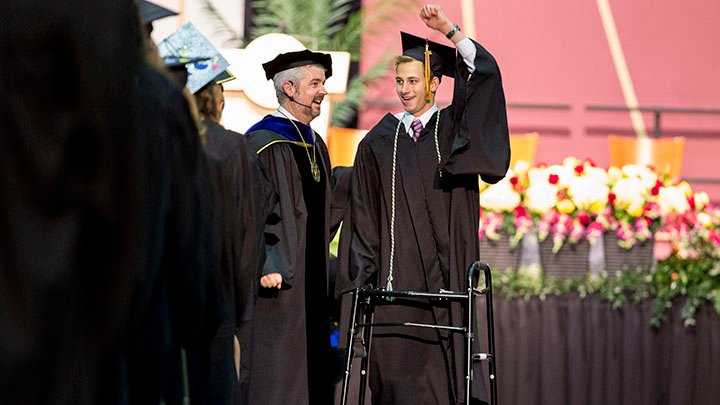 On Saturday, May 20, 2017, Garrett Bazany received a standing ovation as he walked to get his diploma.

On May 29, 2010, Garrett Bazany (Grand Haven, Michigan) woke up in a hospital bed, confused—but only for a moment. As the mental fog lifted, the terrible truth slowly leaked into focus, written all over his parents’ faces. As doctors and nurses came in and out of the room, checking, rechecking, poking and prodding, Garrett knew.

His legs would never move again.

Though he was technically alive, breathing, seeing, hearing, smelling, one thought crept into Garrett’s mind, dominating all others: My life is over.

Just 15 years old and paralyzed from the chest down, everything that had filled Garrett’s days with joy—skiing, running, jumping, and action sports of any kind—was now part of his past. In fact, it was one of those very things that had put him here. Practicing a double front flip on his family’s trampoline, Garrett came up short and landed on his head.

It wasn’t until days later that Garrett learned how severe the accident should have been. His injury, a cervical spine (C7) burst fracture, typically results in full paralysis—not from the chest down, but from the neck down. He never should have been able to pull himself to the edge of his trampoline to dial 911. He should have been left lying there as his spinal cord swelled, cutting off his ability to breathe.

Doctors still can’t explain why, but seven years later, Garrett Bazany is still alive—and a member of the Calvin College Class of 2017.

“After my accident, my life didn’t end,” Garrett says. “In many ways, it began. God started me on a journey I never could have imagined. It has changed me in so many ways and made me who I am today.”

That journey began before Garrett even left the hospital.

“Instead of focusing on the things I couldn’t do, I started to see the things I could do. From that moment on, I have remained positive and focused on my recovery, getting stronger, seeking every adventure, and using my story to make a difference in others’ lives.”

Doctors and nurses would later tell Garrett that his relentless optimism helped him recover faster than they’d even hoped. Then that optimism spread. Other patients around Garrett were inspired by his determination and worked harder to match him. By the end of the summer, ahead of schedule, Garrett was back at Grand Haven High School as a full time student.

He flourished through the rest of his high school years, and knew college was the next step. The only question: Where? He was accepted at the big state schools he’d imagined himself attending—but decided to apply to one more school at his sister’s insistence.

“She had just transferred to Calvin, and she said I had to at least check it out. It wasn’t at the top of the list, but I decided to give it a shot.”

All it took was one visit—and a letter.

“[Director of Admissions Counseling] Ben Arendt sent me a hand-written note after I applied, saying, ‘Thank you for sharing your story. You are exactly the kind of student Calvin College needs… God clearly has a plan for you and is telling an amazing story through your life. Please contact me with any questions. I will personally be available to serve you.’ It was so nice to feel like Calvin viewed me as an individual person, not just a number. I felt that again when I met Calvin’s disability coordinator, who showed me that Calvin had an entire plan to make sure my college experience was everything I wanted it to be.”

Calvin built ramps and improved accessibility, allowing Garrett to become one of the first wheelchair-bound students to live in the dorms full time as a freshman. Campus Safety committed to plowing a path from his dorm to his classrooms early every morning whenever it snowed. And if his car was ever snowed in, they would clear it within minutes.

“I’ve always felt welcomed in the Calvin community,” Garrett says. “It doesn’t matter where I go on campus—there’s always someone I can hang out with. I love knowing most of the people in my graduating class. But there’s also always so much going on. Calvin is the perfect size for me. Not too big, not too small.”

That Calvin community has also helped Garrett discover his vocational calling. After initially exploring engineering, he eventually decided on a medical career—but not as a doctor.

“I was in the pre-med program, but I switched to the pre-physician assistant (PA) program. As a doctor, I wouldn’t be able to get the experience I want with my patients. As a PA, I will have a lot more potential to interact with patients—and have time to spend with my future family.”

With help and recommendations from his Calvin professors, Garrett completed a research position at Michigan State University and received multiple scholarships from Mary Free Bed hospital. He even traveled abroad on a medical missions trip with professor Larry Gerbens.

But academic success isn’t the only thing he has achieved while at Calvin. Garrett’s adventurous spirit has never let him back down from a challenge—and he has yet to meet one he hasn’t conquered. Climbing the 40-foot wall in the Spoelhof Fieldhouse? Done it. Wakeboarding? That, too, complete with jumps off ramps and a bevy of tricks up his sleeve. Skiing? Kayaking? Crowd surfing? Dancing? The Cold Knight Plunge into a freezing Sem Pond? Garrett did it all, and capped it off with a 12-day road trip to see some of the most beautiful places in the country.

“This past summer, [fellow Calvin senior] Nolan Coallier and I drove out west to see some of the national parks, just sleeping in the back of my car. Every night, he’d set up beds for us and move everything I couldn’t. During the day, we explored some places I never thought I’d experience. He even pushed me up 700 feet of elevation so I could look out from Angels Landing at Zion National Park. The people I’ve met and the opportunities I’ve had at Calvin have been amazing.”

At his commencement ceremony, Garrett had one more surprise waiting—one last challenge he’d dreamed of conquering for four years. As the final member of the class of 2017 to hear his name called, Garrett wheeled himself to the front of Van Noord Arena, stopped for a moment, and stood. With the help of a walker—and with Nolan Coallier by his side—Garrett Bazany walked the final stretch to receive his diploma from provost Cheryl Brandsen and then to shake President Michael Le Roy’s hand (which turned into a hug), then he raised a triumphant fist to a thunderous standing ovation. (Watch him receive his diploma starting at 2:04:50.)

“You can’t look back on the past and hope to change it,” Garrett says. “I have to look forward every day. I have to do the best I can to fulfill the life God has set before me. May 29, 2010 was the start of this journey—and I know it’s going to take me so much farther. I can’t wait to see what God has in store for me next.” 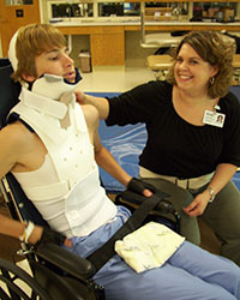 Garrett Bazany in June 2010, a week after his accident. 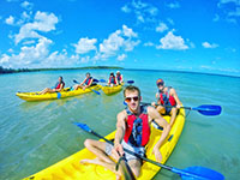 Garrett Bazany in Puerto Rico on an interim trip through Calvin. 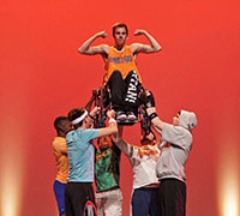 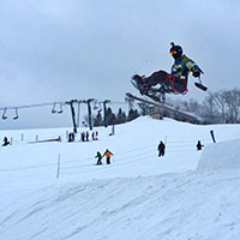 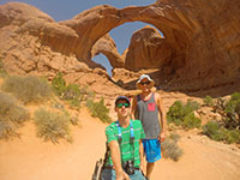