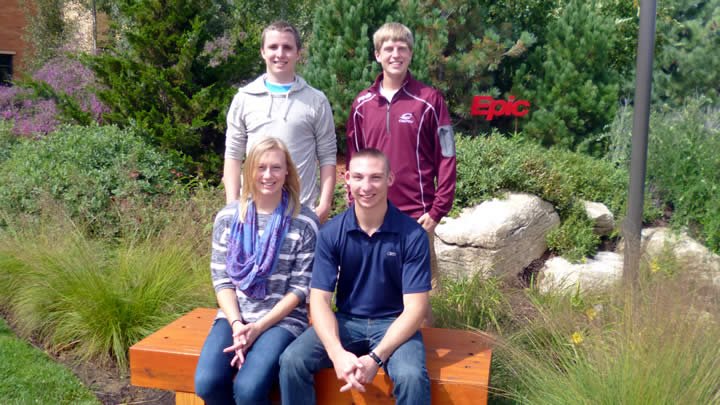 Kristen Herder’s ‘14 first job out of college resembles a return to her childhood.

“Each building has its own theme, taken to an extreme. You can ride a slide from one level to another, have a meeting in the tree house, go to the music room and pick an instrument to play, eat lunch by the waterfall, cross the drawbridge over the moat…the list goes on.”

Herder isn’t the only alum on this adventure. Three of her classmates (Matthew Block, Spencer Olson and Sean VanDerMolen) have joined her as well. And the grads aren’t working at a camp or a youth center, they’re working for a healthcare software company.

“As far as dress code goes, it is not a rumor that the handbook states, ‘You must wear clothes while customers are on campus.’ Other than that, just about anything goes—I’ve seen it all. The company wants employees to feel at home at work,” said Herder.

The company that has lured Calvin students to Madison, Wisconsin is Epic, which offers a unique corporate culture that attracts talented young professionals.

And Epic has been purposeful about recruiting at Calvin, attending the college’s annual engineering and computing career fair and regularly posting positions and searching for resumes on CalvinLink. Herder, who majored in electrical engineering at Calvin, first met with Epic representatives at the bi-annual career fair at the DeVos Place Convention Center in downtown Grand Rapids.

“They were recognizably different from other companies, in their jeans and t-shirts—people who were working in the roles and really understood them,” said Herder.

Epic makes medical software for many types of organizations aiming to improve healthcare quality and to lower costs. Herder says that with the burgeoning healthcare industry and the increasing use of electronic records that it’s no surprise that the company is growing by leaps and bounds. She says half of the people living in the United States are touched by Epic’s software and the company has an international presence as well.

And she says that Calvin alums are well prepared to work at places like Epic.

“Calvin grads have the skills and drive it takes to be successful in a high-paced, demanding and dynamic environment,” said Herder. “Professors provided us with the knowledge to see things from a broader perspective. Writing and debugging software is one thing, but for the code to be effective, you must be able to consider the users’ perspective.”

“Epic’s culture is ‘aggressively friendly,’ people are looking to help others out, initiate communication and build relationships. This community feeling is strong at Calvin and has provided a great transition to a company with a similar value.”

For Herder and her three colleagues from Calvin, the transition to life after Calvin isn’t so different yet: they’re in training for six months.

“It is surprisingly similar to school – we take classes and study for exams in order to get certified in our specific applications. For the three of us who are technical service engineers (Sean is a project manager while the others are programmers), we are learning new languages and how to access the company’s database.”

Herder says the learning curve is steep and the work is challenging, requiring her to spend time outside of work studying.  But she says she feels well prepared:

“Calvin gave me the tenacity to go above and beyond expectations. I am prepared to learn, struggle, and thrive – both technically and in making personal connections. This has been most noticeable in ways I did not expect – trainers have sent encouraging notes to my boss appreciating my friendliness and involvement in class or for helping them clean up the classroom on a Friday afternoon.  Going the extra mile really matters to Epic, since they aspire to be a company that offers a helping hand and puts others first – principles firmly rooted in me through my Calvin education.  It has been so rewarding to see those attributes welcomed and recognized here.”