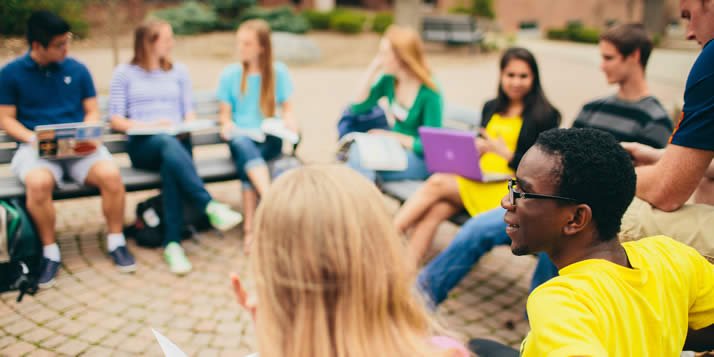 Calvin’s incoming class of 1,107 students (which includes 1,006 first time and 101 transfer students) is up 2.5 percent over last year and is its largest since 2007, marking the third consecutive year of growth for the college.

Thirty percent of the first-year students graduated in the top 10 percent of their high school class. And, the class’ average GPA of 3.66 is the college’s second highest ever. (The only time it was higher was last year’s 3.67.)

The class is also record-setting in terms of ethnic diversity. AHANA (African, Hispanic, Asian and Native-American) students make up 16 percent of the college’s 2013-2014 class—a four percent increase from last year.

Calvin continues to attract students from around the state and from outside of the state and country. The first student who enrolled in Calvin’s 2013-2014 entering class hails from Troy, Michigan; the 1,000th from Moscow, Russia. Fifty-one percent of the incoming class is non-Michiganders.  Calvin’s student body now represents 44 states, 53 countries and six Canadian provinces.

“Students from around the corner and across the globe are drawn to Calvin out of a desire to cultivate their Christian thinking and an eagerness to learn how to put that thought into practice,” said Russ Bloem, Calvin’s vice president for enrollment management. “It is exciting to have such a rich diversity of students here because of the positive impact on the learning environment and in the community. We believe this is good for Calvin and good for west Michigan."

Bloem says with enrollment and diversity on the increase, residence halls filled to capacity and the academic quality of students remaining strong, Calvin will continue to be a vibrant place that attracts great students.