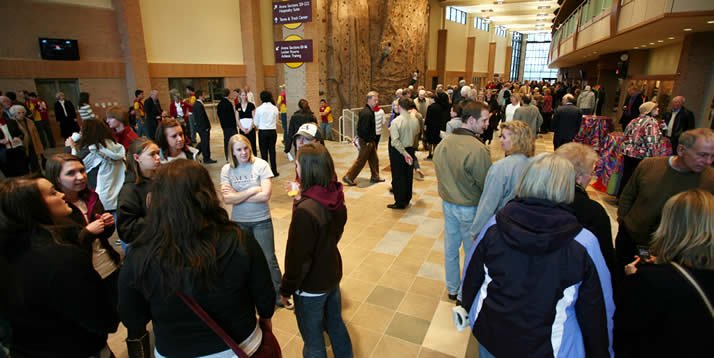 Early in his remarks at the dedication of the new Spoelhof Fieldhouse Complex, Calvin president Gaylen Byker quoted Psalm 127:1: “Unless the Lord builds the house, its builders labor in vain.”

Early in his remarks on Friday afternoon, Feb. 20, at the dedication of the new Spoelhof Fieldhouse Complex, Calvin president Gaylen Byker quoted Psalm 127:1: “Unless the Lord builds the house, its builders labor in vain.”

“We know that it was the Lord who provided for this new fieldhouse complex,” Byker told the crowd of around 1,000 people gathered in the Van Noord Arena. “Building this fieldhouse complex was a massive undertaking, but it was undertaken with prayer from the start.”

Laying a foundation of prayer

Prior to the construction of the new facility, Byker shared, members of the health physical education, recreation, dance and sport (HPERDS) department had prayed in various stations scattered throughout the former fieldhouse. “Their prayers reflect the mission of this college,” he said. “This fieldhouse isn’t just about basketball, volleyball and swimming … This fieldhouse is about the whole community.”

The president’s acknowledgments came midway through the dedication of the new 362,000-square foot complex, following a five-and-a-half-minute video about the facility, a welcome from women’s athletic director Nancy Meyer, the opening prayer from interim Calvin chaplain Andy De Jong and the singing of “Oh, For a Thousand Tongues to Sing,” led by Calvin professor of music Charsie Sawyer and accompanied by the Calvin orchestra.

Part of the campaign

Byker thanked the donors to the project, noting that the new facility—which includes the 4,600-seat arena, the Huizenga Tennis and Track Center, the Venema Aquatic Center, the Hoogenboom Health and Recreation Center and the Strikwerda Outdoor Tennis Center— is an important component of the $150 million Campaign for Calvin College. Byker also thanked campaign co-chairs Elsa Broekhuizen and Milt Kuyers.

“I haven’t been here in recent weeks without a student being on the climbing wall, in the exercise center or running on the track,” he said.

Two alumni whose graduation years spanned decades of Calvin history spoke at the dedication. Kendra Bylsma ’02, a personal coach and the owner of Allegro Coaching, spoke about how she was inspired to pursue her current career track  by her classes in Calvin’s health, physical education, recreation, dance and sport (HPERDS) department. “Not surprisingly, the things that pushed me the most, taught me the most,” Bylsma said. She exhorted Calvin students to incorporate exercise into their daily lives. “You are blessed to have this beautiful facility,” she said. “I would have loved to have this wonderful facility to use when I was a student.”

Kuyers ’57 also spoke, reminiscing about his days as a Calvin cross-country runner. His love for running has helped him to lead a healthy life, and he has passed that love on to his children and grandchildren. Kuyers likewise encouraged the students to pursue an active life. “You have incredible facilities here to take the first step,” he said.

The event closed with a litany of dedication, led by president of the Calvin board of trustees Bastian Knoppers and the singing of “Lord to You Our Hearts and Hands We Offer” and the “Doxology,” led by Sawyer.

At the reception that followed the event, crowds wandered in the hallways, munching on popcorn, hotdogs, potstickers and other concession food. Joust, the Calvin mascot, mingled with the crowd, while nearby Calvin students climbed the 40-foot climbing wall.

“Building dedications are biblical traditions,” said Souzan Karadsheh, the assistant director of development for donor relations who planned the event. “We read in 2nd Chronicles about the dedication of the temple and in Nehemiah about the dedication about the wall of Jerusalem,” Karadsheh said, “so it is only fitting for a community like CC to come together with our alumni and friends to dedicate this building to the Lord in gratitude for his continued provision and in recognition of those who made this building possible.” The dedication was planned to coincide with Calvin Homecoming, she added, to encourage alumni to see the new fieldhouse. “And it’s truly a homecoming for our team because they now have their own facility,” she added.

“It’s great to be here today,” said Bob Berkhof, the senior associate to the president who worked on fund raising for the complex. “I am inspired by the multiuse of this facility and the dedication of it to the glory of God because it was truly an inspiration to be a part of.”

One of the students present agreed. “It’s cool to be a part of it,” said Sarah Looman, a clarinet player in the orchestra, which played at the dedication under the direction of Calvin music professor Robert Nordling. “Maybe our children will be a part of it one day.” 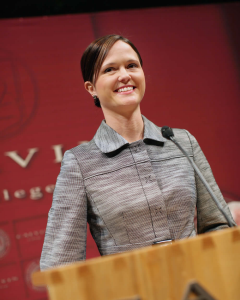 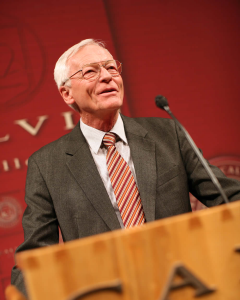 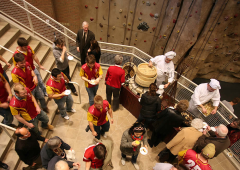 Students and alumni enjoy refreshments in the lobby