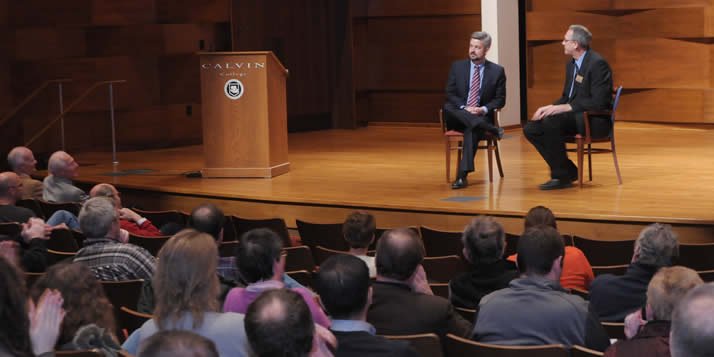 In his first official meeting with the Calvin community, presidential appointee Michael Le Roy talked about the importance of community: “What matters is how you see people and value people and treat people,” he said. “I say that people mean a lot to me because I want to be accountable for that.”

In a town hall meeting, held Saturday afternoon in the recital hall of the Covenant Fine Arts Center, Le Roy met with faculty, staff and emeriti and answered their questions. The meeting took place just hours after the Calvin College board of trustees voted to approve his appointment as Calvin’s tenth president.

In his hour with the faculty and staff, Le Roy talked about the importance of making decisions collaboratively: “I think you get the best results when you get people of different backgrounds around the table,” he said.

He also stressed the importance of good communication, both off-campus and on. “I know when there isn’t a lot of communication, a mythology can develop around an institution,” he said. Le Roy believes his role as president is to serve as “educator in chief” to Calvin’s many constituencies.

Le Roy hopes to spend his first year in office getting educated about Calvin: “There’s a lot of history, a lot of tradition … . There are a lot of acronyms I’ve heard that I don’t know what they mean.” He plans to spend his time listening to and learning from Calvin faculty and staff, constituencies and, especially, students.

“I miss teaching a lot,” confessed the former professor of political science. Le Roy plans to mingle with students at concerts, art exhibitions, games and other events, and he’s getting advice from senior Kelly Larsen, who served on the presidential search committee: “I’ve picked her brain about how to connect with students, and one of the ideas seems to be jumping in a pond in the middle of winter … ,” Le Roy observed. “She and I have a little throw-down going. She’s never jumped in the pond, so she’s going to do it this year, and I’m going to do it the next four years.

Le Roy also talked about the critical importance of the liberal arts in the current educational environment. “I believe this economy needs liberal arts people,” he said, adding that a stockbroker and a history scholar rely on the same communication and analytical skills. “We’re in an environment that’s quite competitive, and it’s eager to make that education into a commodity. We can’t let that happen.”

Le Roy also answered questions about online education, the Calvin brand and diversity. He then met the students who packed a classroom in the Hoogenboom Health and Recreation Center and sat with yet more students at a Calvin basketball game. “My experience of the people has been nothing short of amazing,” he said.

Women’s athletic director Nancy Meyer met Le Roy along with the students: “I was impressed with his ability to put names with faces,” she said. “He had such a busy day and yet kept a smile on his face and never seemed too tired for yet another handshake.”

“I think it’s great,” said annual fund director Rick Treur. “Since I’ve gotten back to Calvin, I’ve noticed that the student body has changed significantly. Less than 40 percent of the incoming freshman class is from a CRC background. We need to reach out to a broader constituency.”

Calvin chaplain Mary Hulst, a member of the presidential search committee said the selection of Le Roy was actually a process of listening to the community, to committee members and to God: “His welcome by the community has been very affirming and overwhelming for him … We look forward to the fresh eyes that he will bring—looking at the denomination, the college and the Grand Rapids community.”

English professor James Vanden Bosch, an attendee at the town hall meeting, sounded a caution about outsized expectations: “The fact of the matter is the hopes and fears of everyone are projected on him, and he’ll have to fail that  sometime in the first 20 minutes,” he said. “But this is a nice beginning.” 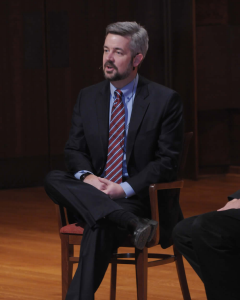 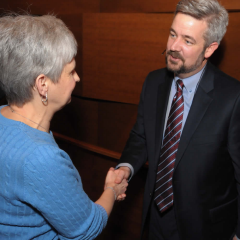 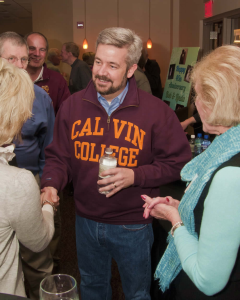 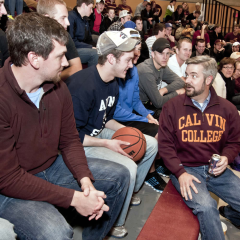