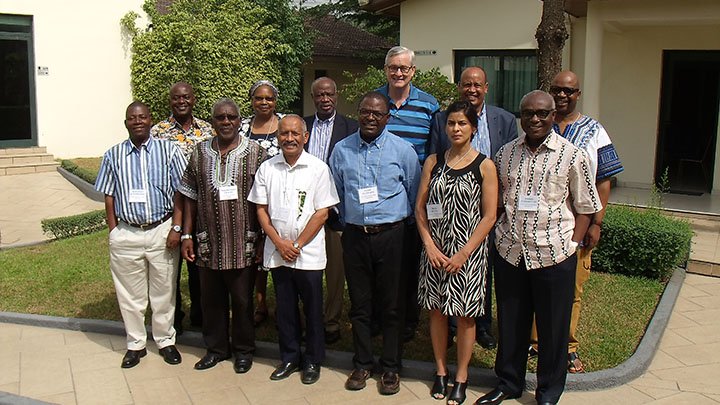 Joel Carpenter (back row, middle) at a meeting with the selection committee in Accra, Ghana in December 2015.

“Calvin College exists for two reasons," said Joel Carpenter, director of the The Nagel Institute For the Study of World Christianity, "to prepare students for Kingdom work and to be a center for Christian thought." He says he believes the institute lives out this vision every day.

This grant will be divided into 16 smaller grants for which educators and Christian leaders from across the continent of Africa can apply. This project will be building upon the work that was done through a previous grant. Project proposals will involve one of four areas: African spirituality and values; health and healing; religious innovation and competition; or forgiveness, peacemaking and reconciliation.

“We want to see seminaries as places that promote engaged scholarship," said Carpenter. "What you teach and learn is not static."

Carpenter said westerners oftentimes will attempt to teach theology with curriculum borrowed from North American and European structures. But, it's important to understand “the average Christian does not look like me,” he said. “We belong to this fellowship that is huge and worldwide.

"Nearly one out of four Christians in the world are Africans. Most of this happened in the last 50 years, so there is a big push for theological education," said Carpenter. He says the importance of doing this work in Africa is huge, considering that the majority of this shift has happened very recently.

Carpenter believes greater resources and literature are needed in Africa, but those need to be developed in a non-western context. “Foreigners won’t get very far,” he said. For this project, Carpenter and his team will be doing background office work, but the initiators and leaders of each project will be from the local communities.

The Nagel Institute will send out proposal requests this July and will make final project selections in November 2017. The first round of projects will begin January 1, 2018.

Carpenter believes that Christians need to be asking: “Is Christianity putting deep roots in Africa? Are African Christians being supported to ask questions? What can the church be doing?”

And he says the Nagel Institute is making steps to bring about God’s shalom. “We’re just a little shop here, but we get a lot done because we partner with others.”

Carpenter served as Calvin’s provost for 10 years. At the end of his term in 2006, he said he wanted to start something new. While he had encouraged the formation of other institutes during his time, Carpenter said, “I had a strong prompting to get in the game more directly. There’s just something I had to do.” That same year he decided to found the Nagel Institute for the Study of World Christianity.

The mission of the Nagel Institute is to accomplish significant work by: promoting a deeper understanding of world Christianity, partnering with study centers to strengthen Christian intellectual movements in the global south and east and provoking a reorientation of Christian thought in the North Atlantic region toward the concerns arising from world Christianity.

The institute engages a variety of projects and ongoing programs in order to pursue their main aims, broadly described as: research, communications, networking and making scholarly resources available.