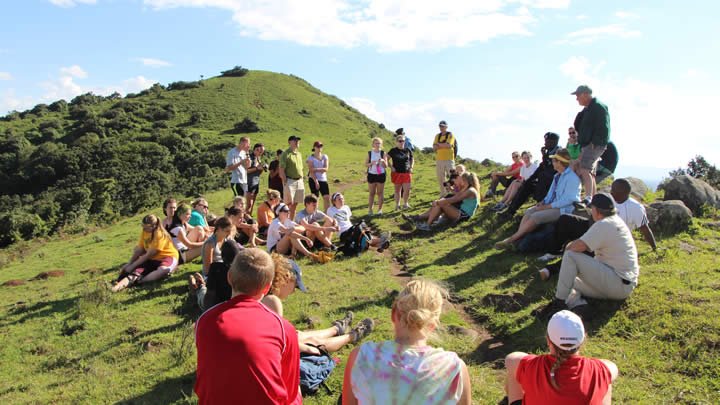 Courses at Calvin are taught on six continents and in more than 30 countries each year, including in the hills of Kenya.

The institute’s most recent Open Doors Report, published on November 16, 2015, shows that 602 students from Calvin College studied abroad during the surveyed period—the 2013-14 academic year—placing the college second in the nation among baccalaureate institutions. That number represents 15-percent of the student body in just one year. According to the Open Doors Report, only 10-percent of all U.S. undergraduate students will study abroad by the time they graduate.

“Experiencing other cultures helps us build a connection with places all over the world, with our neighbors near and far,” said Don DeGraaf, director of off-campus programs at Calvin College. “And our commitment to students learning abroad is rooted in our mission. If we want to work for renewal in the world, we need to first experience the wonder, heartbreak and hope in places we are less familiar with.”

While Calvin College courses are taught on six continents and in more than 30 countries in any given year, the college is also among the national leaders in welcoming students from around the world to its campus in Grand Rapids, Mich. In fact, in 2014-15, the college hosted 467 international students from 56 different countries, accounting for nearly 12-percent of the college’s total enrollment—placing the college fifth among baccalaureate institutions.

The top five countries represented by international students based on their citizenship are South Korea, Canada, Ghana, China and Nigeria.

“Our mission here at Calvin is to equip students to think deeply, act justly and live wholeheartedly as Christ’s agents of renewal in the world,” said Russ Bloem, vice president for enrollment management at Calvin College. “And that equipping is best cultivated in a rich learning environment, where perspectives both foreign and familiar are presented and challenged, molded and refined. To have such a rich diversity of students in this community provides all of us with an opportunity to listen well and to broaden and deepen our understanding.”