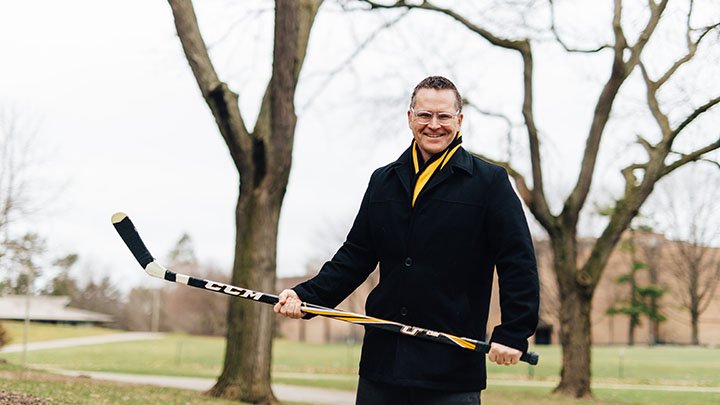 Digging through the archives at the University of Manitoba last year, Calvin College professor of history Bruce Berglund made a discovery.

“I found what historians live for—an undiscovered source that offers a vivid perspective on the past.”

The source was the handwritten diary of a young man from Winnipeg who had studied at Oxford University on a Rhodes scholarship in the early 1920s. Because the student was Canadian and knew how to play hockey, he earned a place on the Oxford hockey team. Throughout the early 20th century, teams from Oxford and Cambridge, made up of Canadian students, regularly traveled to Switzerland, Austria, Germany, and Hungary to play against European club teams.

“This Canadian Rhodes scholar wrote a wonderful journal about the atmosphere at those tournaments, playing outside on natural ice surrounded by mountains,” said Berglund. “He described the action of the games in detail, but then he also wrote about the players he met from other countries and the fans who were there specifically to see the Canadians play.”

For Berglund, the diary of this young Canadian man provides him with a picture of hockey’s emergence as a global sport. These outdoor games in 1920s Europe are the beginnings of the sport’s international growth, leading to today, when more than twenty-five percent of NHL players come from outside North America and over 50 countries have men’s and women’s teams that compete in international tournaments.

Next year Berglund will travel abroad as a Fulbright Global Scholar to research the history of world hockey. The Fulbright grant will allow him to spend a total of five months doing oral history and archival research in three countries—Canada, the Czech Republic and Korea.

“There’s been plenty written about the history of hockey, but much of this work is written from a Canadian perspective and focuses on hockey in Canada,” said Berglund. “But there’s surprisingly little research on hockey in the United States, let alone on hockey as a global sport. What I’m doing is looking at hockey in the context of the globalization of sport. This gives us a completely different view of the game.”

Although Berglund grew up playing hockey in Minnesota and was always fascinated by history, he was discouraged from combining the two interests as a graduate student. At that time sports history was frowned upon as a legitimate topic of research. Only recently have historians recognized that research into sports is an effective way to understand social and cultural change.

A new book series from the University of California Press, called “Sport in World History,” shows this growing scholarly attention to sports. Berglund’s research will lead to a book on hockey’s global history that will be published as part of the series.

One of the countries where Berglund will visit—the Czech Republic—is a place he is quite familiar with. As a graduate student at the University of Kansas, he received a Fulbright Student Grant to do his dissertation research there in 1997-98. Eight years later he returned to the Czech Republic on a Fulbright-Hays Faculty Research Grant, which led to a book that he published this year on religion, culture and politics in Czechoslovakia.

Berglund says his prior sojourns have given him helpful insights into his current project.

“In 1998, the year the Czechs won the hockey gold medal at the Nagano Winter Olympics, I was out with the crowd celebrating. At the time the country was going through a political and economic crisis. But I saw how the Czechs winning the gold in hockey created this moment of euphoria that brought tens of thousands of people out into the streets.”

Berglund, who has two children who were born in the Czech Republic, also says the significant time he spent overseas has shaped his perspective of the world, which he sees paying huge dividends for him and his students.

“My wife and I lived in a socialist-era apartment next door to Czechs. We went to the grocery store, waited in line at the post office. She had a baby in a Czech hospital,” said Berglund. “I’ve found that this first Fulbright was an essential experience for me in terms of becoming an historian and a teacher, in particular a teacher of different world cultures.”

Berglund seeks to pass along to students an awareness of the day-to-day cultural patterns that are necessary for living and working in other countries. “Those are the kinds of things you don’t pick up necessarily in a short trip,” he said. “That comes from living in a country for months.”

Berglund has already spent much time in Canada and the United States doing research for his book. He has even interviewed a number of former players and executives, including Michael Eisner, former CEO of the Walt Disney Company, who was at the helm when Disney established the NHL’s Anaheim Mighty Ducks in 1993.

But in his pursuit to uncover the broader story behind the globalization of hockey, he will spend several weeks in Korea studying the sport’s recent development in that country and in East Asia more broadly. His research visit will coincide with the 2018 Winter Olympics in Pyeongchang.

One of Berglund’s sources for understanding Korean hockey is Jim Paek, the head of that country’s national hockey organization. Paek was the first Korean-born hockey player to win a Stanley Cup (he won two with the Pittsburgh Penguins), and he was a longtime assistant coach for the Grand Rapids Griffins. During his nine years living in Grand Rapids, his children attended Grand Rapids Christian Schools.

Now Paek is preparing the Korean men’s hockey team for the Winter Olympics. And he’s offering Berglund an all-access pass, agreeing to make himself and his players available for interviews.

“He even suggested that I could have a skate with the team,” said Berglund with a smile.

“Paek has been very generous in supporting this project. He’s interested in seeing hockey continue to develop in Korea and more broadly in East Asia. He sees my project as important in helping people understand the appeal of hockey not only in North America, Europe and Russia, but also in these other countries where the sport has been growing in recent decades.”

The Korean men’s and women’s teams have never participated in an Olympic tournament before, and they gained automatic bids to the 2018 Games as the host country. Berglund sees this as a unique opportunity to interview the first Korean hockey players to represent their country at the Olympic level.

As much as Berglund is excited for the research aspect of the project, he also is reminded of the main benefit of his travels, which is also the driving force behind the Fulbright Program—to increase mutual understanding between the people of the United States and people of other countries.

The Fulbright program was created by the United States government in 1946 to aid international educational and cultural exchange. The program is sponsored by the Bureau of Educational and Cultural Affairs of the United States Department of State, while participating governments and host universities also contribute to the exchange of scholars and students. Each year roughly 1,200 U.S. scholars and several hundred teachers and professionals participate in the program, in more than 160 countries.

“Thinking of the main purpose of the program, the research work I’ve done is only a small part of my Fulbright experience,” Berglund said. “As a teacher and scholar, I’ve worked with students who have gone on to serve in U.S. embassies overseas. I have former students working in the State Department, in organizations that are doing development work, students who have gone on to be professors and teachers overseas. I’ve played a small part in the education of these people who are doing important international work. And that part I’ve played was shaped by my own experience living overseas as a Fulbrighter.”

Since 2004, Calvin has had 17 Faculty Fulbright Awards.

Since 2005, 10 students have been awarded Fulbright Awards.