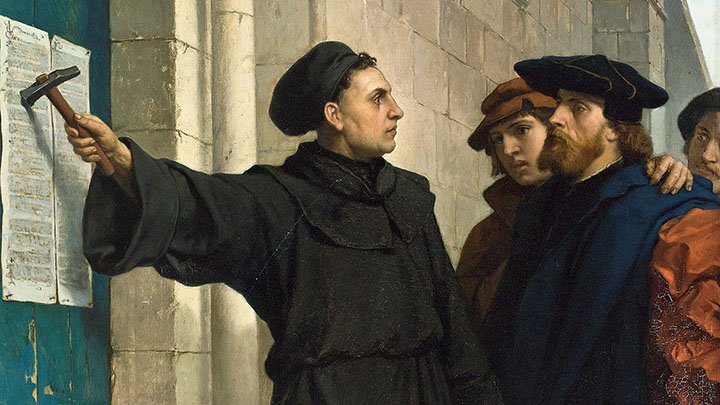 In 2017, Calvin College is observing the 500th anniversary of the Protestant Reformation. A series of events have been planned to commemorate the milestone year.

On Thursday, March 9, the H. Henry Meeter Center for Calvin Studies at Calvin College will host an opening reception for “Here I Stand,” an exhibition that runs March 9-31 and features 30 accessible and engaging posters which include colorful maps and graphic-novel-style scenes from this important moment in history.

The reception runs from 5-7 p.m. in the Meeter Center (located on the fourth floor of the Hekman Library) and will feature an address by German Consul-General Herbert Quelle on Reformation-era German-Jewish relations.

And, earlier in the day from 3:30-4:30 p.m. in the Calvin Seminary Chapel, the Meeter Center will be celebrating its 35th anniversary with a lecture by Nicholas Terpstra, chair of history at Victoria College, University of Toronto. His talk, “The Reformation of Refugees: Forced Migration and the Meaning of Reformation,” will look to tell the story of the Reformation from the perspective of its refugees.

Karin Maag, director of the Meeter Center, and an expert on the social history of the Reformation, says that her work is about equipping people to think deeply about the past in order to better understand the present.

“We have been actively fostering student and faculty research on the Reformation for 35 years,” said Maag of the Meeter Center’s work. “We are strategically placed to serve as a linchpin, linking up with others across denominations in North America and around the world to collaborate on commemoration activities.

“There are two key reasons why the Reformation still matters today. First, we can't make sense of the present-day situation of the Christian church, with all of its divisions, without a well-grounded understanding of the roots of these divisions. Think of a person struggling with memory loss: because they can't remember, they struggle to function in the present. In other words, it's hard to know where you're going if you don't know where you've been.

“Second, the Reformation, with its multiple and competing answers to what Christians should believe and how they should worship, made people face the challenges of competing belief systems and made people think deeply about the challenges and possibilities of living alongside people who held radically different answers to these questions. We continue to face these same questions today, and we can learn from the Reformation's experience.”