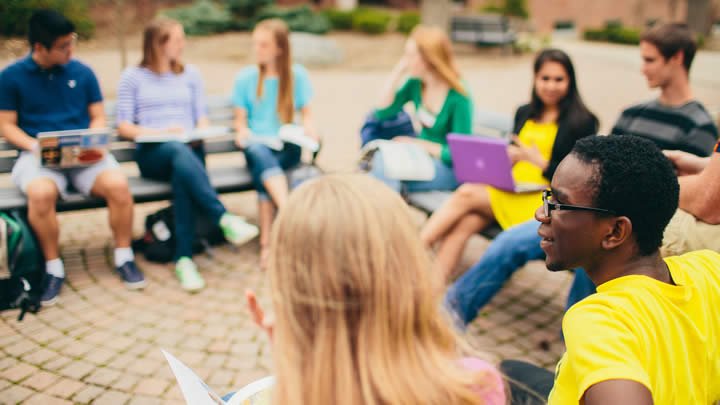 Calvin College was honored by Partners for a Racism Free Community (PRFC) at the group's annual forum, held on March 19 at Celebration Cinema in Grand Rapids.

At that event the college was designated a Level II Partner for having successfully completed the PRFC Institutional Challenge to Achieve Racial Equity (ICARE) assessment process.

Said Calvin's Michelle Loyd-Paige, the college's dean for multicultural affairs and interim executive associate to the president for diversity: "The ICARE assessment process is intended to identify where our institution is today and guide our future efforts. It is a process that helps us to gauge how much our organization has accomplished and how much more we may need to do to satisfy our organizational goals for achieving a racism-free environment.

"Becoming a Level II partner is a significant milestone in Calvin’s efforts toward becoming an academic institution that embodies the reconciling power of the Gospel and is inclusively excellent."

Loyd-Paige notes that Calvin's Level II designation marks the second time in three years that the college has been honored by PRFC for its anti-racism efforts.

In March 2012, Calvin gained level-one "Full Partner" designation at the end of a two-year process that included demonstration of anti-racism efforts in six categories: Engagement of Leadership; Internal Practices and Policies; External Collaboration and relationships; Contractor, Vendor and Supplier Practices; Client, Congregation, Customer and Marketplace Practices and Measurements and Results.

But Level I, she noted, is mainly about an organization committing to the idea of becoming racism-free and about establishing a plan.

"Level II," she said, "means you're making significant progress. You're proving it: putting your words into action."

The Level II designation comes on the heels of a gratifying personal award for Loyd-Paige. In February she was named the 2015 recipient of the Floyd B. Skinner Justice Award as part of the annual Giant Awards in Grand Rapids, awards that each year honor African American leaders for their exceptional contributions shaping the history and quality of life of greater Grand Rapids.

The Skinner award goes to those who exemplify a concern for peace and genuine respect for people, fairness and equity and is named for a former city civil rights attorney who was an influential voice in promoting African American employment in Grand Rapids.

That theme includes these words: "We have made many gains as a college, but still have much to do."

Loyd-Paige agrees with that sentiment. But she's also pleased by progress.

"Calvin is on the right track," she said, "but this is an ongoing effort with a long arc. And in many ways the journey is as important as the destination. Still things like the Level II award are affirming and give us hope even when things sometimes get frustrating. But we trust that the Spirit is at work, and we persevere."