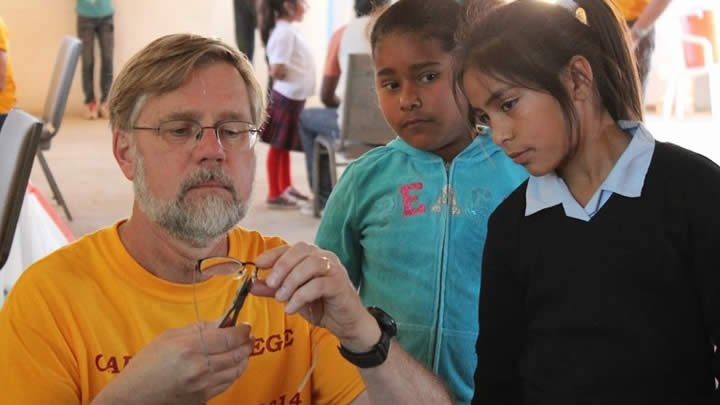 When biology professor John Ubels recognized a need for eye care in Tijuana, Mexico, he knew he could not address it alone. Combining his background of clinical eye research with the professional experience of former ophthalmologist and current pre-health adviser Larry Gerbens, the two worked to try to meet that need.

They planned to direct the first eye care interim to Tijuana, Mexico, in January 2014. Once selected, the 12 students in the program began collecting glasses.

Before long, Ubels and Gerbens realized that the magnitude of the project, which included cleaning and sorting the glasses, was too much for them to tackle.

“So the thought came to me,” Gerbens said, “Why don’t I talk to the Lions Club? I knew the Lions Club in my previous life as an ophthalmologist. I called them and said, ‘This is what we’re going to do, let’s sit down and talk about possibilities.’”

“The Grand Rapids Lions Club is very active,” Gerbens noted. “They have a warehouse where glasses come from all over the state of Michigan. They sort and clean them, read the prescriptions and organize them all on spreadsheets.”

During the semester prior to the trip, the group donated the glasses they had collected to the Lions Club and volunteered at their warehouse on Tuesday nights, cleaning and sorting the masses of glasses that the club receives. Eventually they learned to read and computerize them.

Tuesday night volunteering at the Lions Club remains a service-learning opportunity for Calvin students. “It introduces students to how a service organization functions,” said Gerbens. “When you consider that about one out of every eight Calvin students is involved in a health or pre-health program, it’s important that they have opportunities to combine both academic and medical service components.”

For his efforts and contributions throughout his career and in this endeavor, the Lions Club has awarded Gerbens with the Lifetime Achievement Award (see sidebar).

“Once the Lions Club got to know the Calvin students and understood what we were planning to do with the eye care interim, they became really committed and excited about our plans,” said Ubels.

The Lions Club gave the group more than 1,000 pairs of glasses, all neatly organized by prescription on spreadsheets, something both Gerbens and Ubels acknowledged the group could not have done by itself.

The glasses were taken on the trip to Tijuana, where students learned refractions and optics and set up clinics. They gave eye exams and distributed the glasses to the local people who don’t have access to eye care physicians.

“Taking time to do the prep work rather than just signing up and going on the trip was essential,” said senior pre-medicine student Aaron Burghgraef. “We learned to appreciate the process. So when the time came that we were giving exams and delivering the glasses, we would occasionally come across a pair and think, ‘Oh yeah, I had to clean these ones or I tested that prescription.’ Our partnership with the Lions Club in Grand Rapids enabled us to have more of a connection through our work in Tijuana.”

Working side by side

Ubels emphasized the collaboration with the local pastors and church members. “They were there every day helping to advertise and check patients in. If your mission trip doesn’t involve the community of the people you’re helping, you’re doing it wrong and you have to redesign.”

Ubels and Gerbens are very aware of the skepticism surrounding short term missions. Gerbens responds by saying, “In the spirit of humility, cooperation and respect, we’re going to do what we can in the time allotted, leave behind what we can in education and good will, and work toward lifting these people up to do the same thing. Waiting until that happens might mean another 20 years without sight for some of them. It’s a process.”

The process becomes more sustainable with each subsequent eye care interim to Tijuana. Future groups will be able to help those who have developed eye problems or are in need of a new prescription since the previous group went.

Through a continuing partnership with the Lions Club, Ubels and Gerbens hope to lead another eye care interim to Tijuana in January 2016 and for many years to come, each time growing the sustainability and transformative power of the work they have begun. 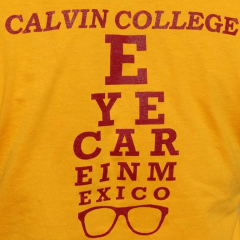 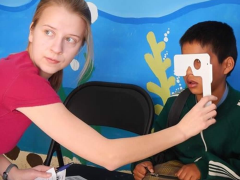 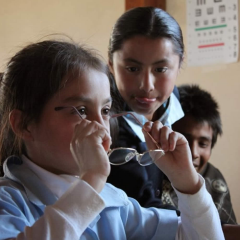 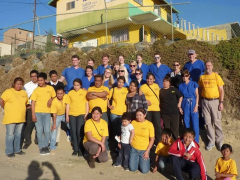 Gerbens has invited Marcia Beare, a pre-med student who lost her sight at an early age. Attending the event along with them will be senior Taylor Hegg, who has assisted Beare throughout her time at Calvin.

The Lions Club does missions in Haiti, so Gerbens also invited a group from Neland Ave. Christian Reformed Church that does work in Haiti and senior Watsonel Paul, who is from Haiti and plans to return to serve in the medical field after medical school.

“I connect the dots. This award will hopefully enable me to connect more dots between marvelous people,” said Gerbens, who has previously worked in development at Calvin. “That’s a gift I’ve always had, but I learned to nourish, fulfill and advance it in my development days. Development is all about connecting people with their passion. It’s not enough to connect alumni with Calvin College. You have to connect them with the passions in their lives and then to what’s being done at Calvin to further their passions.”