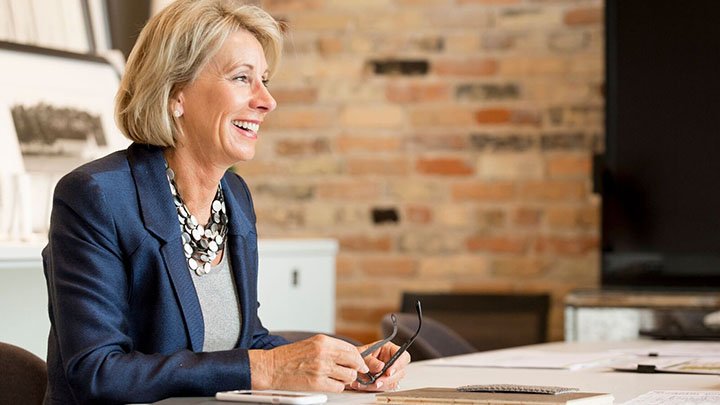 DeVos is the first graduate of Calvin College to be selected as a member of the Cabinet of the President of the United States.

Calvin College alumna Betsy DeVos ’79 has been named the United States Secretary of Education. It’s the first time in the college’s 141-year history that one of its graduates has become a member of the Cabinet of the President of the United States.

“We congratulate Betsy (on her confirmation),” said Michael Le Roy, president of Calvin College, “and we pledge to pray for her as she takes on her important tasks and duties in the days, weeks, months and years to come. Her portfolio includes higher education, so we also stand ready to be a resource for her if she should need that as she pursues her work.”

“It is a profound honor to serve America’s students in this capacity. Regardless of one’s views, we all share a common goal: to make public education better,” said DeVos.

DeVos was confirmed on February 7, 2017, thus becoming the primary advisor to President Trump on federal policies, programs and activities concerning K-12 and higher education in the United States.

Prior to her nomination DeVos served for more than two decades as chair of the board of Windquest Group, a privately held investment and management firm based in Michigan. Her online biography notes that she has been active in politics for more than 35 years (serving in numerous leadership roles with campaigns, party organizations and political action committees) and has been elected chair of the Michigan Republican Party four times. It adds that "today, her political efforts are focused on advancing educational choices," noting that "Betsy is a pioneer in fighting to remove barriers, enact change and create environments where people have the opportunity to thrive."

DeVos also previously served as chair of both the American Federation for Children and The Philanthropy Roundtable’s board of directors and on a number of other national and local boards including ArtPrize, American Enterprise Institute, Foundation for Excellence in Education, and the DeVos Institute for Arts Management at the University of Maryland.

And Calvin graduates are also involved in a wide variety of school settings around the world as educators and administrators; as nurses, librarians, computer specialists and safety officers; as volunteers and mentors; as school board members; and much more.

“Calvin students are called to make a difference as Christ’s agents of renewal and our hope is that when they graduate they will continue to be receptive to God’s calling,” said Le Roy. “In accepting the nomination, Betsy too is living out the value of service for the common good she learned on Calvin’s campus almost four decades ago. Now that she’s been confirmed it is my hope that all alumni can work together to provide the next generation with an excellent education.”