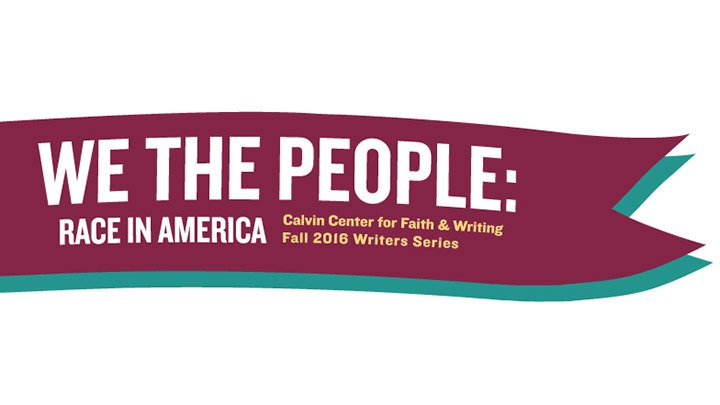 “We the People: Race in America” is the theme of the Calvin Center for Faith & Writing’s 2016 Fall Writers Series, five events that underscore the way literature invites people into an empathetic experience of race.

“In this election year we are hearing a lot of talk about race from people across the political spectrum, and those are important conversations that need to happen,” said Lisa Ann Cockrel, managing director of the Calvin Center for Faith & Writing (CCFW). “But at the CCFW we’re big believers in the power of the literary arts to provide insight that goes beyond headlines and talking points. So, we thought this was a timely moment to make space for creative writers to talk about race.”

Public theologian and founder of Sojourners, Jim Wallis started off the series in September when he drew a crowd of more than 1,000 to campus to hear about his latest New York Times-bestselling book, America’s Original Sin: Racism, White Privilege, and the Bridge to a New America. His lecture was followed by lively comments from both Dr. Elisha Marr, assistant professor of sociology at Calvin College, and Dr. Mika Edmondson, pastor of New City Fellowship OPC.

In October, the series moved to a warehouse on the west side of Grand Rapids where a packed room saw the Ebony Road Players perform Randy Wyatt’s original play, A Simple Question, during ArtPrize. The 30-minute, 5-woman ensemble drama celebrates the landmark Supreme Court case that overturned laws banning interracial marriage in 1967.

Writers working in memoir, poetry, and fiction will round out the series in November and December. See the remaining schedule below.

The Calvin Center for Faith & Writing’s mission is to celebrate a Reformed engagement with the written word, championing faithful and intelligent conversation about the intersections of religious belief and literature, broadly defined. To learn more about the CCFW, visit ccfw.calvin.edu.

Thursday, November 10, 7 p.m. (Calvin College, Recital Hall)
Austin Channing Brown: Writing Down the Bones
A popular blogger and widely traveled speaker on racial justice and reconciliation, Austin Channing Brown will be doing a reading based on her upcoming book about the burdens her black body carries by virtue of living and working in spaces characterized by whiteness. Her reading will be followed by a conversation about the authors—Ta-Nehisi Coates, Ntozake Shange, and Audre Lorde among others—whose work has been the lifeblood for her own writing.

Thursday, November 17, 7 p.m. (Calvin College, Meeter Center Lecture Hall)
W. Todd Kaneko: An Elbow Drop to the Conscience
In The Dead Wrestler Elegies, celebrated poet W. Todd Kaneko mines the history of professional wrestling to examine complex relationships between fathers and sons and makes the wrestling ring an allegory of childhood, desire, and loss. All this as an Asian American and in spite of the racist melodramas that frequently play out in the personas of the wrestlers and between the athletes and audience. Kaneko will read from his book and discuss the racial dynamics of the sport, writing from and about Asian masculinity, and the literary properties of spandex. A book signing will follow the event.

Thursday, December 8, 7:30 pm (Ladies Literary Club, 61 Sheldon Blvd. SE)
Peter Ho Davies: Becoming American
Sly, funny, intelligent, and artfully structured, The Fortunes by Peter Ho Davies recasts American history through the lives of four Chinese Americans and reimagines the multigenerational novel through the fractures of immigrant family experience. Spinning fiction around fact, Davies uses stories—three inspired by real historical characters—to examine the process of becoming not only Chinese American, but American. Released just this fall, The Fortunes has garnered swift and widespread critical acclaim. Davies, who also faculty in the University of Michigan’s Helen Zell Writers’ Program, will read from his novel and discuss the challenges of writing fiction inspired by real people and how his own experience of becoming American since immigrating 25 years ago informed the book. A book signing will follow the event.