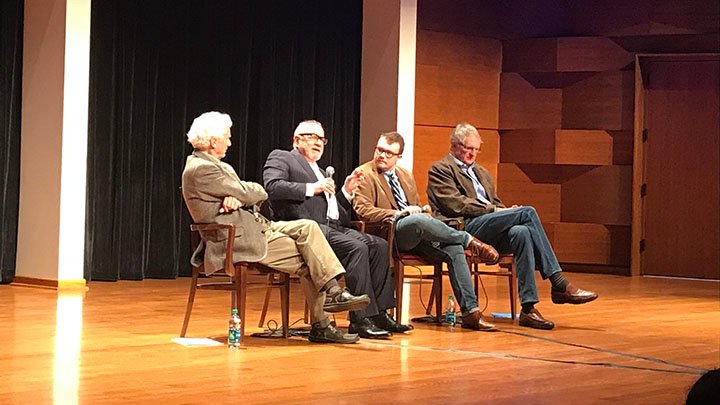 On February 20, Calvin hosted a lecture and panel discussion highlighting the transcendental style of filmmaking in light of Schrader’s film, First Reformed, and book, Transcendental Style in Film.

“Spirituality in art is about the how not the what,” said Paul Schrader. “Transcendental filmmakers have a different agenda, they want to draw audiences closer to transcendental world, using cinematic technology to bring the audience into the holy.”

Schrader, West Michigan native and a graduate of Calvin College, is a celebrated filmmaker, screenwriter film critic. Among his writing credits are Taxi Driver, The Last Temptation of Christ, and Raging Bull, all directed by Martin Scorsese. Schrader has also directed more than twenty films, including Light Sleeper, Affliction, and most recent film, First Reformed.

Schrader began exploring his love of film after graduation. “When I was a kid, if you had an idea, I thought it could only be expressed in words or a piece of music. I didn’t realize images could be ideas too,” said Schrader. “At the time, the Reformed view of was very restrictive, so growing up I did not watch a lot of movies, but when I graduated Calvin 50 years ago, the 60s carried me away from my love of philosophy to a love of cinema.”

The Loeks Visiting Film Artist Series, sponsored by Celebration! Cinema and Calvin College, presented a pre-release screening and the Michigan premiere of First Reformed on February 19. First Reformed, starring Ethan Hawke and Amanda Seyfried, follows the journey of a grief-stricken chaplain in upstate New York. “I’ll never have a screening better than that,” said Schrader about the premiere at Celebration! Cinema. “We had a full house of people that understood the full extent of the subtext.”

First Reformed has been widely acclaimed by critics and will be released to the general public later this spring.

Schrader is also the author of a widely-anthologized article on film noir, and the book Transcendental Style in Film, soon to be published in a revised edition by University of California Press. “For years, Schrader’s book has been the go-to for anyone studying religion and film,” said Roy Anker, Calvin professor of English emeritus.

As seen in First Reformed, transcendental films are marked by lingering, of setting and lack of human expression, explained Wolterstorff. “Almost everything is slow,” he said. “Cameras linger over closed doors, not even beautiful doors, but plain doors. We cannot read the emotions of characters even though their faces are shot straight-on.”

Schrader said that in the slow moments of  the audience starts to create its own thoughts about the narrative. “When audiences watch slow movies, they are not just watching a film, they are creating one,” he said. “The audience is active rather than reactive. For example, there is no music playing in the background telling the viewers how they are supposed to feel.” However, faith-based films should not be confused with transcendental style, noted Schrader. “Inserting Jesus into a film is not the same as making a spiritual film.”

Schrader said that films today have an average of five times as many cuts than in the 70s. “We have trained ourselves to absorb information overload.” The transcendental style of is a conscious breaking away from that to invite the audience into the holy. “Transcendental film is about how God meets us in the mundane,” said Schrader. “Faith is greater than emotion; it does not manipulate feelings, but rather put what is divine at the center of wonder.”