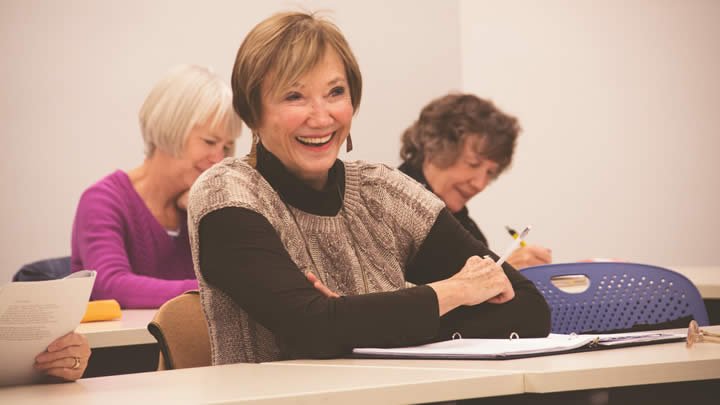 One of the things Calvin College emphasizes to students is that developing lifelong learning habits equips us for a rich life of service.

And who better for students to take a cue from than 1,900 senior citizens, members of the Calvin Academy for Lifelong Learning (CALL).

CALL was founded in 1996 by a group of Calvin emeriti, alumni and employees who wanted to create a meaningful way for retirees to continue their education.

And so CALL started with a pilot program of nine courses. In the two decades since, CALL has added a Noontime Lecture Series, member events, extended trips and has assumed oversight of the Passport Travel Film series, which is now in its 50th year at Calvin. The next travelogue show will be a high-definition film called “Cuba: A Road Trip from Havana to Santiago de Cuba,” on Monday, Nov. 23.

Sonja De Jong, administrative coordinator for CALL, says the program is flourishing, and it continues to be sustained through word-of-mouth advertising.

"It’s crazy how many people are in this program because they had a conversation in a swimming pool exercise class," De Jong said. "We do not advertise because [CALL members] like to have coffee, and then they just talk."

CALL is largely a volunteer-driven organization, with only two full-time employees, De Jong and Marjo Jordan, the membership assistant. Volunteers who sit on various committees do the bulk of the planning.

De Jong said CALL is looking into partnerships with local arts groups to share information, including Broadway Grand Rapids, the Grand Rapids Symphony and Master Arts Theater. CALL’s hospitality committee also might host a community-wide Antique Day, to which attendees could bring two art pieces each and pay $5 to have them appraised.

"It’s kind of like the 'Antiques Roadshow,' but on a community level," De Jong said.

CALL provides entertainment and fellowship, but the program was built on its educational offerings, which include courses in English, history, economics, technology and philosophy. Jennifer Holberg, professor of English, has been teaching CALL courses since 2001.

Holberg has taught a range of four- to six-week courses, from Victorian literature to contemporary poetry to film to the works of Flannery O’Connor. She said one of the things she loves about CALL is forming relationships with returning students.

"I have a lot of students who come every semester to take a class from me," she said. "I consider them friends. There’s one lady who I go and have tea with occasionally."

"It’s also fun because, of course, I have some of their grandchildren as students," Holberg said.

According to De Jong, that cross-generational connection is part of what makes a mutually beneficial relationship between Calvin and CALL.

"We believe that [CALL members] have the ability to influence their grandchildren on where they’re going to go to college," De Jong said. "We want CALL to become so important to them that it trickles down to their grandchildren."

One of the newest instructors is Kevin Corcoran, professor of philosophy.

"I taught a course called 'Persons, Bodies and Life Everlasting,'" he said. "We looked at different views of human nature, and then we thought about the afterlife and how that’s going to work."

Corcoran said one of the remarkable things about teaching the class, which included students in their 90s, was the rich perspective they brought to the subject of mortality.

"The topic was really meaningful to them in maybe a different way than it would be to you and me," he said. "It’s a lot closer to the surface."

"You know in Hebrews where it talks about the great cloud of witnesses and the communion of the saints? These CALL participants are a part of that intellectual community." 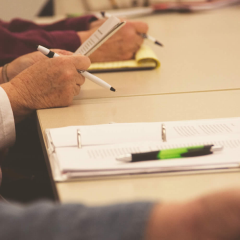 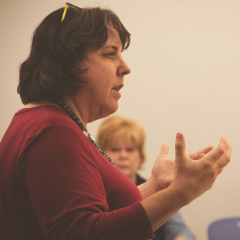 Holberg has been teaching CALL courses since 2001. 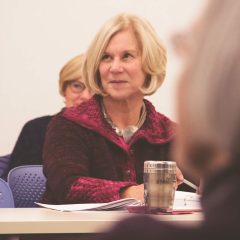