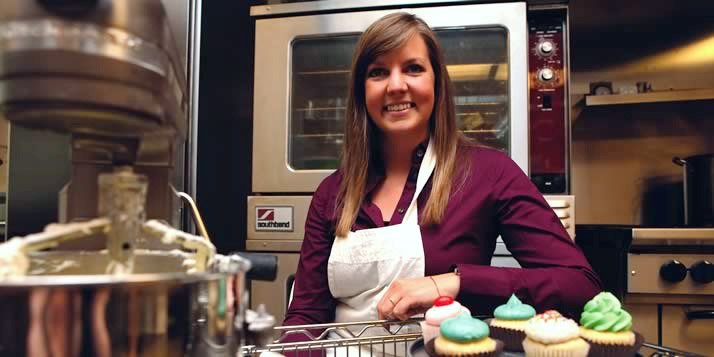 When Kelly LeCoy was a freshman in high school, she envisioned herself working on the 54th floor of a skyscraper in downtown Chicago, doing public relations or “something glamorous like that.”

Fast-forward to 2011. Kelly is spending her final semester as a Calvin student in Chicago, interning at a community business alliance. Her internship isn’t on the 54th floor of a skyscraper, but she’s interviewing at a company in Chicago’s “Loop” district.

The company calls her to schedule a second interview for a position in its marketing office. She’s one step closer to that dream job.

THE BEGINNING OF A PLAN

Jump back a year. Kelly is a junior in an advanced marketing class taught by business professor Tom Betts. She’s considering topics for her senior honors thesis: a marketing plan for a hypothetical company or a cost-benefit analysis for a new variety of ice cream at a local creamery. The sky’s the limit.

Professor Betts makes it clear that the project should be about something she loves—something she could spend her life doing after graduation.

Jump back another year. Kelly is entering her junior year. She and her friends love exploring Grand Rapids’ trendy neighborhoods, where they can’t get enough of the delicious dishes offered up by places like The Electric Cheetah Bistro and The Green Well. She loves grabbing artfully-crafted espresso drinks from Sparrows Cafe and digging through fashionable resale items at Urban Exchange.

And while she loves exploring new foods and fun products, she’s equally interested in the businesses behind these things. She notices how passionate the business owners are about their offerings and how people flock to these shops for the quality products and the personal service.

By the fall of her senior year, Kelly starts her honors project: a marketing plan for a potential business in Grand Rapids’ growing Wealthy Street district. She’s thinking a clothing store, maybe specializing in vintage fashion.

Then she has her moment. The one when the proverbial lightbulb comes on.

It happens as she’s talking with Calvin graduate and Wealthy Street business owner Amy Ruis ’94. Kelly learns that the state of Michigan doesn’t allow food producers to sell their products in shops like Amy’s Art of the Table unless they are created in a regulated commercial kitchen.

Enter Kelly’s idea: “Why couldn’t I make a kitchen? People can rent it from me and then they can sell their food wherever they want!”

Kelly’s brilliant idea, it turns out, isn’t new. Many cities around the country have rental kitchens where food entrepreneurs can create their products. Now Kelly can use other commercial kitchens as models for her own kitchen.

Professor Betts helps Kelly refine her plan with what seems to her like a never-ending stream of questions:

TO CHICAGO, WITH A PLAN

In January of her senior year, Kelly’s bags are packed for her semester in Chicago and the business plan could easily go in a box for storage.

Instead, Kelly uses her time in Chicago to pursue the plan further, visiting rental kitchens in the Windy City to research cooking equipment, kitchen layouts and startup costs.

When Kelly heads back to Grand Rapids in March to present her business plan at bizPlan, a Calvin-sponsored competition, her plan is so well-researched that it takes first place and earns her seed money for Uptown Kitchen. In April she competes in another regional business plan competition and wins that, too. More seed money.

As Kelly nears the end of her senior year at Calvin, she has a second interview for a dream job in Chicago. She’s also got $4,000 in start up money and a few potential investors for her Grand Rapids-based Uptown Kitchen business.

“I realized, my heart’s in Grand Rapids—that’s really where I want to be,” she said.

Two hours later, she receives a phone call from a large office furniture manufacturer in Grand Rapids, asking her to interview for a project management position there. She interviews for—and gets—the job at Steelcase Inc.

Now Kelly spends her days managing the proposal process for government furniture contracts and nights looking at potential spaces for Uptown Kitchen. In June, she presented her business plan—again—to prominent Grand Rapids business people in a contest called 5x5, and won. The seed money from 5x5: icing on the cake.

Kelly always knew she wanted to go to a Christian college, but wasn’t sure she could find a business program with enough course offerings. She eventually chose Calvin: “It really came down to the community at Calvin. I really felt at peace when I was visiting campus and just saw myself here for four years.”

Kelly’s sold on two things: the level of individual attention she’s gotten from her business profs and the real-world experience she’s gotten in classes and internships. “The professors have just poured into me, and we’ve had a lot of opportunities to work with actual businesses. Having to present a marketing plan to an executive from Hudsonville Ice Cream is way different than doing problems in a book.”

A Christian perspective on business: