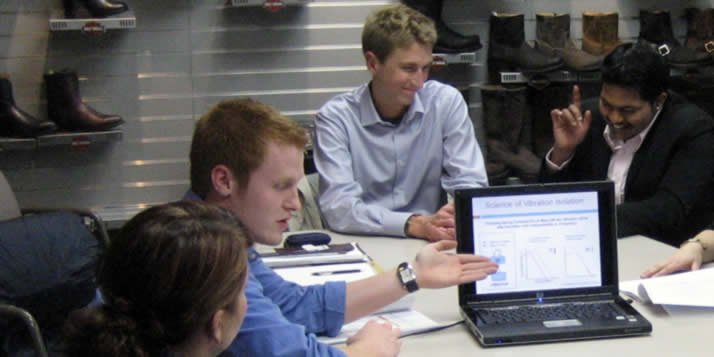 This past semester, senior information systems major Aravind Ranganathan learned that riding a motorcycle is tiring; the vibrations produced by the machine can exhaust a rider.

This past semester, senior information systems major Aravind Ranganathan learned that riding a motorcycle is tiring; the vibrations produced by the machine can exhaust a rider. As part of his “Advanced Topics In Marketing” class, Ranganathan—along with fellow seniors Erin Deter, Jake Bosma, David Granger and Jeff Smith—worked for Wolverine World Wide Inc., researching ways to dampen the vibrations.

Wolverine is the company that manufactures footwear for Harley-Davidson Inc.

“We went to the Calvin Engineering Building to ask a professor about how anti-vibration works and what material was the best to absorb vibration,” said Ranganathan, an information systems major from India. “It was fun to figure out how to control vibration in a shoe using the same method that a car uses.”
As the semester moved on, the company also asked the students to research fashion trends that the company could incorporate into a new footwear line.

Other issues further complicated the project. “I say that it was hard not because of the project itself, but because of the time constraints … ,” said Ranganathan. “We just didn’t have enough time to figure it out.”
But according to business professor Bob Eames, difficulties are exactly why such projects are so beneficial. “Calvin business students with 75 percent of their degree completed get assigned to a group that they don’t choose, to work for a client that they don’t choose, and they have to do research that they’ve never done before,” he explained. “And then they wind up doing really cool work.”

Eames does not leave the students to figure everything out for themselves, however. “Professor Bob walked us through the paths of the individual steps,” said Ranganathan. Eames helps students engage in what he calls “design thinking” by teaching them a five-step cycle. The students learn to understand, observe, synthesize/realize, prototype and measure.

In order to figure out what types of products people could actually use, BUS 381 students learn to do some basic ethnographic research using design thinking; they watch people and, according to Eames, “gather insights in order to develop design principles.” Then, the students analyze patterns of behavior and come up with products that clients will find useful.

Eames assigned one team to work with cleaning tools manufacturer Bissell Inc., to research stick goods, such as mops and brooms, and determine how they could be made more user-friendly. Students analyzed the behavioral patterns of professional and non-professional cleaners. They decided that a mop with a narrow, elongated head was a more efficient tool for cleaning small areas—such as those behind toilets—than a mop with a standard rectangular head.

One thing Eames particularly stresses is that design is not some lofty theoretical ideal; it is practical and down-to-earth. “What we try to get our students to understand,” he explained, “is that design is really just figuring out how to solve problems. In my class, students learn how to understand user problems and then solve them. That’s what design is.”

The students agreed that the class’s value came from its practicality.

“Just knowing that you are involved in a process that provides people with the means of making their world easier is very fulfilling,” said Bosma. “If you can find a way to make an imperfect world operate even a fraction of a degree smoother, it is a step in the right direction.”

And in spite of the challenges, many students come away grateful for the chance to prove themselves. “If we don't interact with real people out there who do these kinds of things for a living, then it is a waste of our time as well as the professor’s because we are not proving anything to the professor or to ourselves,” said Ranganathan.

“One of the main things students say about this class,” agreed Eames, “is that the hands-on experience is fantastic.” 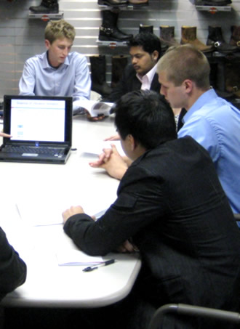