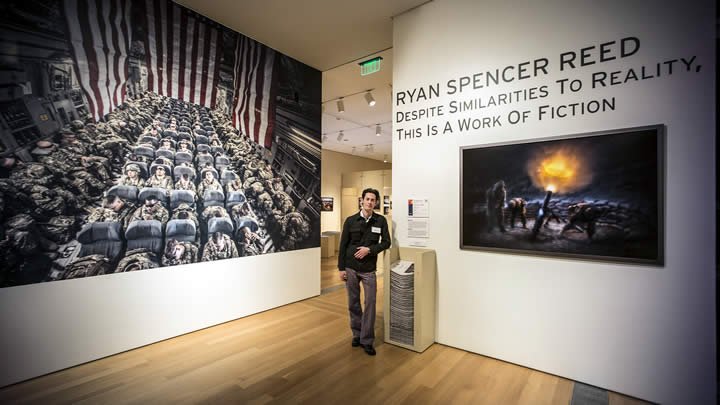 The cost of war is immense, but, according to Ryan Spencer Reed, only one percent of the American population is conscious of that cost.

“The fact is that when we enter a war 99 percent of us go on with life as is, and it’s only one percent that is doing the work,” said Reed. “And in our technologically advanced society, fewer and fewer will ever know the true cost of war, the heavy burden put on that one percent.”

The 2002 Calvin alumnus is trying to change that: He’s trying to raise awareness in the other 99 percent. In order to do that honestly, Reed spent 13 months with the 506th Parachute Infantry Regiment, from training to deployment, photographing almost everything along the way.

The result, “Despite Similarities to Reality, This is a Work of Fiction,” is featured at ArtPrize, an international art competition held in Grand Rapids that was started to inform the general public about art.

Reed’s work presents images of the gripping realities of war, from mass casualty training to a soldiers’ worship service to a new father participating in the birth of his son via Skype.

Reed said he was inspired to take on the project through a long lineage of armed forces service in his family, and most recently his cousin Tad, a third-grade teacher when the 9/11 planes hit, and now an officer in the battalion. “I grew up with him, and I was intrigued by his decision,” he said.

The experience was eye-opening for Reed, who was surprised by how hard the soldiers work. “The personal, physical and emotional demands are extraordinary,” he said.

Reed is hoping that those who view his work will walk away with a greater appreciation of what’s not known, he said. “I hope it gets them asking tough questions and getting more engaged. I would like to ensure that the wars we enter in will be as honorable as the services we expect from those who are actually a part of it.”

Reed’s work is one of 30 alumni works on display at ArtPrize, and one of six among the top vote getters in the competition. Rick Beerhorst’s City as Muse, Adam Bock’s West Michigan Winter, Nicholas Kroeze’s The Pond, Carol Kok Roeda’s Color Out the Darkness, and Team GIBB’s (Kyle Venhousen, Brad Jansen, James Kessel, Jeremy Kruis and Stephen Panaggio) Walk-in Camera Obscura are also garnering attention. To see more of these works and to vote for them visit ArtPrize.org.