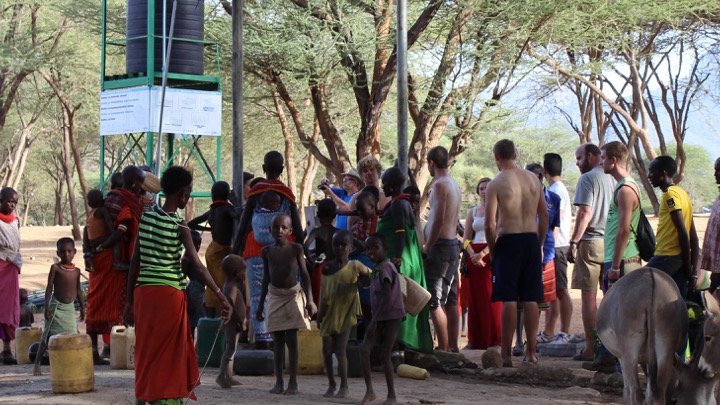 Art Professor Frank Speyers’ Brand Design (ARTS 355) class has tackled a number of real-world projects since its inception, from work for nonprofit clients such as Habitat for Humanity, Salvation Army and the American Red Cross, to more recently, branding for businesses such as Herman Miller and Steelcase.

This semester, Speyers decided to have his students return to the world of nonprofits after a meeting with David Wunder, professor of engineering and director of the Clean Water Institute of Calvin College (CWICC).

A moment of serendipity

“I was at Madison Church last fall, and I was wandering through the lobby, and there was this man,” Speyers said. “As we got to talking, and he shared [about his role at CWICC] with me, I knew that this was a God thing. Rather than take on Herman Miller or Steelcase, this was really an important issue. So David sent me some notes, and now we’re going to take on this serious issue.”

The serious issue Speyers refers to is CWICC’s role in partnering with other organizations to improve access to clean water and sanitation in developing countries such as Ecuador, Peru and Ethiopia. During a time when Americans’ awareness of clean water issues is at high levels, thanks to water crises in Flint and around the nation, CWICC is honing in on developing countries, where lack of access stems from a complex set of factors.

The Brand Design students’ role will be to build a brand for CWICC from the ground up and to present their work to the institute at the end of the spring 2016 semester.

Q&A with the director

To kick off the project, Wunder came to the Brand Design class on Feb. 11 for a question-and-answer session that allowed students to learn about the institute’s values and mission. Wunder brought a 15-slide PowerPoint presentation as a starting point for the discussion.

He spoke first on CWICC’s purpose: “We’re into the nitty gritty of water protection, development, treatment and delivery,” he said. “The purpose is focused on the water overseas, but also really enhancing undergraduate experiences through teaching, learning, scholarship and service.”

Wunder said the institute’s goal is to link Calvin students and faculty from across disciplines—engineering, geology, chemistry, psychology and sociology, to name a few—and professionals, congregations, NGOs and businesses to local communities in developing regions to solve problems through research and service.

When asked what the institute’s founding values are, Wunder emphasized the words transformation, renewal and abundance—transformation of systems and lives, renewal of water and ways of thinking, and abundance as in the abundant life that Christ promises His followers.

When Speyers asked who the audiences for the class’ messaging will be, Wunder listed two relevant clients: “Those that would fund the work, and those that would be involved with the work.” He also emphasized that the brand the class is building must persuade folks to get involved.

In response to a student’s follow-up question, Wunder said the people the institute hopes to bring in to do the work are mostly “within the Calvin fence line—mainly faculty and students,” although CWICC is partnering with a number of clean water organizations as well.

Wunder said CWICC’s current year-one goal, among other things, is to gain support and establish credibility.

As far as what the institute’s actual work will be, Wunder described it like this: “When I talk to potential partners,” he said, “I ask the question, ‘What are ways that the institute can get involved that would take you to a place you can’t get to otherwise?’ Maybe it’s with internships, maybe it’s looking at data for a pump operation or installations in Kenya. When I ask that question, I can almost see light bulbs go off for folks: ‘We’ve got 10,000 data points sitting in a computer that we know is valuable, we just don’t have a person or time to look at it.’ So that kind of thing.”

Now the hard work begins for the ARTS 355 students: They must assess the institute and begin to formulate a brand, uniting text and images, that tells CWICC’s rich and complete story.