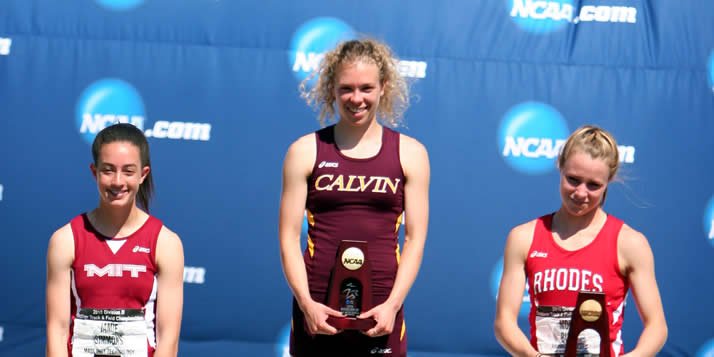 Calvin junior Rachel Boerner never expected to lead the final stretch of the 400-meter dash at this year’s NCAA III Indoor Track and Field Championships. The indoor 400 is run on a 200-meter indoor track, and in her second lap, Boerner was among the runners jockeying for position on DePauw University's track in Greencastle, Ind.

The 21-year-old Calvin physics major made her first move on the cut-in, the spot on the track where runners are allowed to move from their assigned lanes to lane one. “I put on a burst of speed, so that I could cut in to the very center before we got around the curve—so I wasn’t running on the outside—and that got me into second place,” she said. “And then, as we started the second lap, we rounded the corner, and at the end of the corner is where I always plan to kick it in there and make a move.”

Boerner (pronounced "burner") won the event with a time of 55.95, becoming Calvin’s first indoor national champion in the college’s second year of indoor track competition. “And the only thing keeping me going at the end was knowing that the other runners were right behind me,” she said.

Although indoor track is a new sport at Calvin, Boerner has already distinguished herself in it. Last year she ran on Calvin’s All-American 4x400-meter relay at the NCAA III Indoor Championships, helping the team to third place in the event. A two-time All-American, Boerner placing fourth in her freshman year as a part of Calvin’s 4x400-meter relay team and took second overall in the 400-meter hurdles as a sophomore.  This spring, she has posted the fastest times in NCAA III women’s outdoor track in the 400 meters (55.29) and 400-meter hurdles (1:00.51).

Boerner has a lot of gratitude for the track program at Calvin and a lot of respect for its history. “The track team wasn’t a huge factor in my coming to Calvin,” she said.  “But now that I’m here, the people and the program and the coaches are so amazing, and I wouldn’t trade it for the world now.”

First-year Calvin head track and field coach Bret Otte returned the compliment: "Rachel is a joy to coach. The two things we focus on with our athletes every day as coaches are effort and attitude. Those are the two things an individual can control,” he said. “With Rachel, her attitude and effort have always been top notch. She is not only talented, but is also driven to use the gifts God has given her to the best of her ability."

Drawn to the Midwest

A native of North Dakota, Boerner relocated to New Jersey after her sophomore year of high school. She spent her senior year of high school at the Hillcrest Lutheran Academy in Minnesota. Her brother-in-law, a Calvin alumnus, encouraged her to consider coming to Calvin for her undergraduate studies. Boerner liked Calvin’s Midwest location, and she followed his advice.

Boerner also liked Calvin’s astronomy program. In addition to her physics major, she carries a double minor in Spanish and astronomy, and eventually, she’d like to attend graduate school to pursue medical physics.

"I’d like to work in a hospital someday,” said Boerner. “I have a strong interest in working in the radiation department, maybe in radiation imagery or some other facet.”

This spring, Boerner has also served as a member of Calvin’s Student-Athlete Advisory Council (SAAC). The group recently hosted a “Buddy Day” on campus with students from Ottawa Hills High School. Students from the two schools enjoyed a Calvin softball game and a picnic dinner.

A mentor and a leader

"We (SAAC) are working on developing a mentoring program with area high schools,” said Boerner. “This was one of our first steps with the program. It was a good experience.”

Boerner is gearing up to compete again. This weekend, May 6–7, 2010, the Calvin women’s track and field team will compete at the MIAA Field Day hosted by Alma College. The Knights will be seeking their 21st consecutive MIAA title. Calvin’s current streak of 20 league crowns is the longest active championship streak in MIAA women’s athletics history.

"Rachel is a leader for our track and field and program on and off the field and she does so by example,” Otte said. She works hard in practice every day and competes with everything she has in her. Off the field, she studies hard and is willing to serve others in the community. Her teammates see that example and follow her lead which is very pleasing to see as a coach.”

"Team-wise, we have goals for placing and how well we do at conference,” continued Boerner.  “But it’s also about growing as a team, getting to know the people and sharing in the community.” 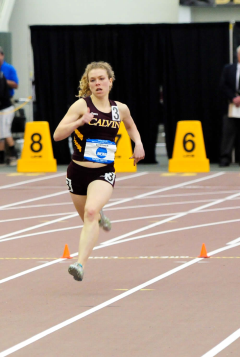