Beyond the Courtroom: Judge inspires kinesiology students to speak up boldly 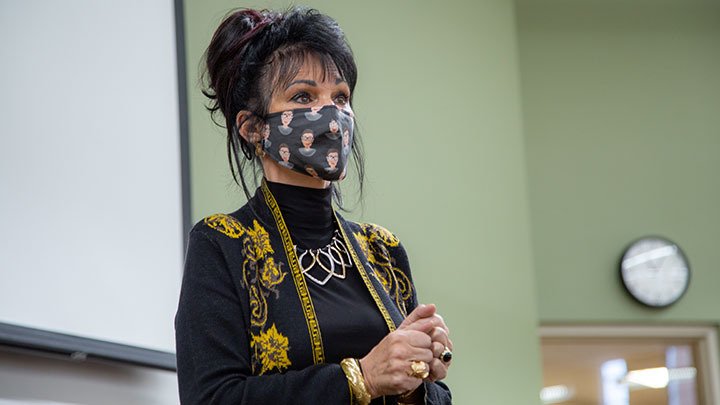 “Changing the world one person at a time is important.”

If you were to walk by one of the kinesiology classrooms in early January, you might not have taken note of the small, dark-haired woman wearing a Ruth Bader Ginsberg-themed mask standing in the front of a very full classroom. But inside, a powerful story was being shared. Students were being inspired to speak up for those who need advocacy and to continue the fight for justice.

The speaker, Judge Rosemarie Aquilina, is known for her role in sentencing Larry Nassar, a former doctor for USA Gymnastics and sports medicine physician at Michigan State University, to up to 175 years in prison after he pled guilty to charges of criminal sexual conduct. Aquilina rose to national fame for her fierce dedication in making sure that every single victim of Nassar had an opportunity to give their personal testimonies.

Kinesiology professors Kerrie Berends, Debra Bakker, and Amber Warners invited Aquilina as a guest speaker for their two interim courses, “Women’s Health” and “The Wild World of Sport”, along with Kyle Keiser, whose daughter was one of the survivors who gave her impact statement during Nassar’s trial.

“We were thrilled to be able to listen to Judge Aquilina speak. It fit right in with our class. We discussed how we, as Christians, need to react and help change some of the issues which have to do with power, race, socioeconomic status, and gender in sport,” said Warners, who also serves as women's volleyball coach at Calvin. “Listening to Judge Aquilina was such an incredible opportunity to see that in action.”

“What would you like me to know? How can I help?”

Over seven days’ time in Aquilina’s courtroom, 156 victims of Nassar were able to use their voice to share their experiences, often confronting Nassar directly. Aquilina explained the importance of letting the victims have a moment to reclaim the power.

The classroom listened intently as Aquilina explained that she tries to empower everyone who steps into her courtroom—even the defendants. She views each person in her courtroom as an individual and believes that they are worth her time. Aquilina told the classroom that hundreds of defendants have written to tell her that she was the first person that told them that they mattered. By asking the right questions, she has learned that you can find out more information and be one step closer to being able to help that person.

“We can change the culture of silence. Speak up until you are heard.”

Through her time as a judge, Aquilina has seen a broken system that needs change. She explained that money is prioritized more than people, victims’ voices are often silenced, and people can get lost in the system.

Aquilina looked at each student in the classroom and explained that they have the power to begin crucial change by speaking up collectively and having uncomfortable conversations. When voices join and change is demanded, people in power listen. She argued that even small steps can lead to big changes.

The judge’s courage and empathy for the sexual assault survivors and her tenacity for justice for all resonated with the students in the class. Professor Berends said, “I think Judge Aquilina connected with our faculty, staff, and students because her message and actions reflect Calvin’s mission to think deeply, act justly, and live wholeheartedly as Christ’s agents of renewal. Bringing hope and healing to hurting people are important aspects of that and the judge’s work is focused on empowerment, redemption, and the promotion of change.”

As students filed out of the classroom, some stopped to talk with Aquilina, and others asked to have their photos taken together.

There are many strong women who I have had the pleasure of meeting in my life who have inspired me immensely, but I have to say, Judge Aquilina was someone who made a bigger impact on me than I think anyone else had," said one student.