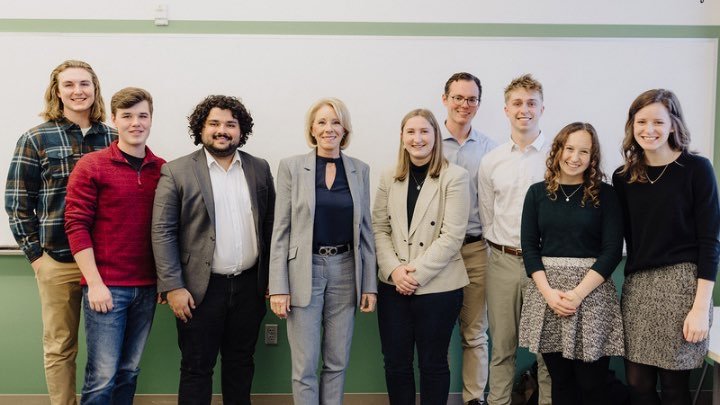 On Thursday, November 17, prior to her moderated Q&A with Brian Bolt, Calvin alumna and former U.S. Secretary of Education Betsy DeVos met with a group of Calvin students for a Q&A time.

On Thursday, November 17, Calvin alumna Betsy DeVos returned to her alma mater for a moderated discussion with the university’s dean of education Brian Bolt. DeVos is the former U.S. Secretary of Education, who served from 2017 to 2021. She recently released a book: Hostages No More: The Fight for Education Freedom and the Future of the American Child.

K-12 education has been a hot topic over the past few years and there are many viewpoints on how best to deliver this public service to students. The conversation on Thursday allowed DeVos to share her thoughts on the state of education and lay out what she sees as the best path forward.

Bolt, along with members in attendance who submitted questions, asked and provided space for DeVos to talk about her time as secretary and to respond to criticisms of her approach to public education.

“These are the kinds of conversations we must continue to have at Calvin,” said Wiebe Boer, president of Calvin University. “At Calvin, we engage ideas, we test them, and we hold onto the good. Secretary DeVos gave us a lot to think about, and I know we’ll do well at Calvin to think deeply about these ideas and to continue to gain understanding around issues, like K-12 education, from varying viewpoints.”

“One thing that I find incredible is that Calvin University has alumni who are or have served at the highest level of public service,” said Jeff Haverdink, director of alumni engagement. “To have an alum who was the secretary of the U.S. Department of Education is remarkable. And this isn’t the exception, either. We have alums who are state senators and members of the House of Representatives who are on both sides of the aisle. Whenever we can have one of our alums who has served at this level return to campus, it provides a great learning opportunity for our community.”

“Our alums care about their communities. By allowing our students to learn how to think, rather than telling them what to think, we are preparing them well to engage in what many refer to as the messy middle, but I like to call the missing middle,” said Boer. (Listen to Boer's take on Calvin's call to engage in this space during this section of his Inauguration address.) “We want our students to build bridges rather than fortify silos, and we are renewing our commitment to create the fertile ground that allows for civil dialogue on many issues.”

The university anticipates engaging more alumni and other leaders in the state and national government in conversations around issues that matter to students and the broader community. Hillary Scholten, who earlier this month made history by becoming the first woman to represent the city of Grand Rapids in Congress, accepted an invitation to have a conversation at Calvin during the spring 2023 semester (exact date being determined).