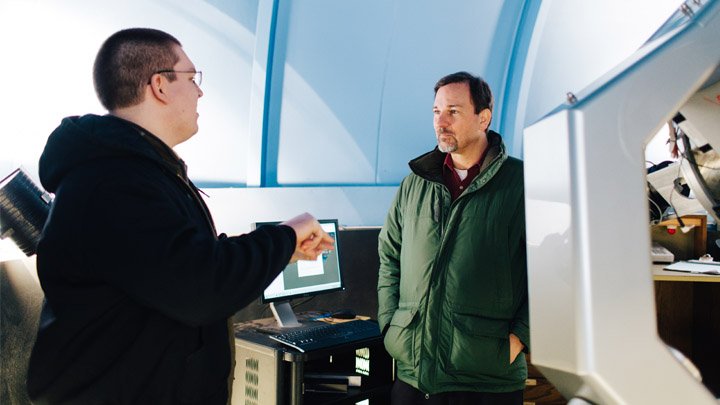 Calvin College professor Larry Molnar and his students along with colleagues from Apache Point Observatory (Karen Kinemuchi) and the University of Wyoming (Henry Kobulnicky) are predicting a change to the night sky that will be visible to the naked eye. At 10:15 a.m. CST on Friday, January 6, a press briefing was held at the Gaylord Texan Resort & Convention Center (Austin 5) where Molnar shared how a prediction he made in 2015 of a binary star merging in the near future is progressing from theory to reality.

“It’s a one-in-a-million chance that you can predict an explosion,” Molnar said of his bold prognostication. “It’s never been done before.”

Molnar’s prediction is that a binary star (two stars orbiting each other) he is monitoring will merge and explode in 2022, give or take a year; at which time the star will increase its brightness ten thousand fold, becoming one of the brighter stars in the heavens for a time. The star will be visible as part of the constellation Cygnus, and will add a star to the recognizable Northern Cross star pattern.

Calvin communication arts and sciences professor Sam Smartt is producing a documentary on the nature of the scientific discovery, the development of undergraduate researchers and the power of "small science." Watch the trailer.

A question leads to exploration

Molnar’s exploration into the star known as KIC 9832227 began back in 2013. He was attending an astronomy conference when fellow astronomer Karen Kinemuchi presented her study of the brightness changes of the star, which concluded with a question: Is it pulsing or is it a binary?

Also present at the conference was then Calvin College student Daniel Van Noord ’14, Molnar’s research assistant. He took the question as a personal challenge and made some observations of the star with the Calvin observatory.

“He looked at how the color of the star correlated with brightness and determined it was definitely a binary,” said Molnar. “In fact, he discovered it was actually a contact binary, in which the two stars share a common atmosphere, like two peanuts sharing a single shell.

“From there Dan determined a precise orbital period from Kinemuchi’s Kepler satellite data (just under 11 hours) and was surprised to discover that the period was slightly less than that shown by earlier data” Molnar continued.

This result brought to mind work published by astronomer Romuald Tylenda, who had studied the observational archives to see how another star (V1309 Scorpii) had behaved before it exploded unexpectedly in 2008 and produced a red nova (a type of stellar explosion only recently recognized as distinct from other types). The pre-explosion record showed a contact binary with an orbital period decreasing at an accelerating rate.  For Molnar, this pattern of orbital change was a “Rosetta stone” for interpreting the new data.

Upon observing the period change to continue through 2013 and 2014, Molnar presented orbital timing spanning 15 years at the January 2015 meeting of the American Astronomical Society, making the prediction that KIC 9832227 may be following in the footsteps of V1309 Scorpii.  Before taking the hypothesis too seriously, though, one needed to rule out other, more mundane, interpretations of the period change.

In the two years since that meeting, Molnar and his team have performed two strong observational tests of the alternative interpretations.  First, spectroscopic observations ruled out the presence of a companion star with an orbital period greater than 15 years.  Second, the rate of orbital period decrease of the past two years followed the prediction made in 2015 and now exceeds that shown by other contact binaries.

Moving from theory to reality

“Bottom line is we really think our merging star hypothesis should be taken seriously right now and we should be using the next few years to study this intensely so that if it does blow up we will know what led to that explosion,” said Molnar.

To that end, Molnar and colleagues will be observing KIC 9832227 in the next year over the full range of wavelengths: using the Very Large Array, the Infrared Telescope Facility, and the XMM-Newton spacecraft to study the star’s radio, infrared and X-ray emission, respectively.

“If Larry’s prediction is correct, his project will demonstrate for the first time that astronomers can catch certain binary stars in the act of dying, and that they can track the last few years of a stellar death spiral up to the point of final, dramatic explosion,” said Matt Walhout, dean for research and scholarship at Calvin College.

“The project is significant not only because of the scientific results, but also because it is likely to capture the imagination of people on the street,” said Walhout. “If the prediction is correct, then for the first time in history, parents will be able to point to a dark spot in the sky and say, ‘Watch, kids, there’s a star hiding in there, but soon it’s going to light up.’”

Molnar says that this is the beginning of a story that will unfold over the next several years, and people of all levels can participate.

“The orbital timing can be checked by amateur astronomers,” said Molnar. “It’s amazing the equipment amateur astronomers have these days. They can measure the brightness variations with time of this 12th magnitude star as it eclipses and see for themselves if it is continuing on the schedule we are predicting or not.”

See an earlier iteration of this story, which includes video and photos.