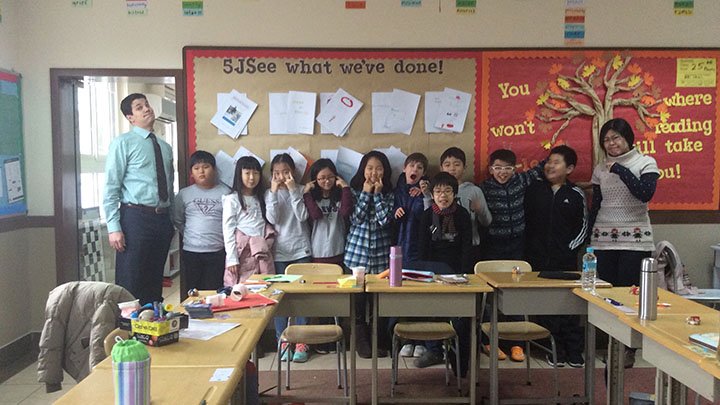 Justin Crull, a 2006 grad, is a fifth grade teacher at an international school in Qingdao, China.

With every passing year, the world becomes increasingly interconnected. Eighty percent of the goods Americans buy at Walmart are made in China. A large percentage of us drive Japanese cars, albeit made in our country. The Amway Corporation, whose headquarters are a short drive from our college, did sales of more than $3.5 billion  in China this past year. And Johnson Controls in Holland, Michigan, designs car interiors for all the Japanese automakers. The U.S. also increasingly depends on partnering with other nations to fight international terrorism and global climate change. Just within our own country, 14 percent of our citizens were born in another country and grew up speaking a language other than English.

And yet in recent years, only around 20 percent of all students in U.S. colleges and universities study any foreign language. A mere 1.6 percent ever take an advanced course in that language in order to get to a level where they can actually use that language in any significant way.

It is disheartening to realize that our country, the dominant economic, political, military and cultural force in the world, shows such little regard for learning about the languages and cultures of other nations. It is also not a very good strategy from a pragmatic standpoint.  Knowing at least one other language can be a tremendous help in getting a lucrative and meaningful job. That is particularly true for the languages of China and Japan, which are now the number two and three economies in the world after the United States.

From the Christian standpoint, there is the higher calling to be an ambassador of Christ in the world. We at Calvin take the call to be Kingdom builders to mean showing compassion and understanding for all of the world’s people, all made in the image of God. That requires that we learn to speak the language of people different from ourselves, both literally and figuratively.

In recognizing the many reasons for learning a foreign language and realizing the need to better understand the more than 20 percent of the world’s people who live in China and Japan, Calvin College began to offer Asian languages 33 years ago. As such it was a pioneer among Christian colleges in North America. Since then the program has grown to include five Asian language teachers, with an average of 150 students learning one of the three major East Asian languages.  There are currently around 70 students majoring in either Chinese, Japanese, Asian Studies, or Chinese education. The Asian Languages Program includes courses in various aspects of Asian history and culture as well, and offers semester programs in China, Japan and Korea.

As a result, this program has already produced a large number of graduates who have gone out in the world to serve in a wide variety of ways, using the knowledge of Chinese or Japanese language and culture they began to acquire at Calvin College. Some, like Elizabeth Holcombe and Eric Bratt, work as Foreign Service Officers for the U.S. government in embassies in China. Others, like Jared English, serve as managers of U.S. factories in China, where they oversee hundreds of Chinese employees. Still others (whose names we are withholding) have a long-term commitment to serve the growing Christian Church in that country.

A great many graduates of our program have taught English in China or Japan on multi-year contracts. In the past few decades, as many as 55 of the graduates of our Japanese Program have been hired by the Japanese government to teach English in the middle schools and high schools of Japan. James and Cara McDonough are completing their fifth year as English teachers in Hiroshima, before they return to the States to enter graduate school. A great many of the graduates of our Chinese program have taught English at universities across China. Don Weck is currently serving as an administrator for a staff of English teachers at a university in Zhengzhou, China. Evert Van Steenbergen, who began his study of Chinese at Calvin and then received an MBA, has served for many years as National Development Director for a network of English training centers across China, which he has helped grow from two to 70 over the past 15 years.

Even a few of our students who are seeking a career in medicine or engineering have found their knowledge of Chinese to be a huge asset in their work. A medical student for the past three years at Wayne State University, Cory Toomasian, has helped lead a research team to China. Current Calvin student, Evan Heetderks, who is pursuing a double major in Chinese and engineering, spent this past summer as the only foreigner working with Chinese engineers in remote Qinghai Province in China on a project bringing solar power to the province.

Calvin graduates are using their knowledge of Chinese and Japanese language and culture in fields as diverse as education, business, government work, missions, engineering and medicine. Their background in Asian languages and cultures has not only made them successful in their fields, however. The Christian values which Calvin College helped instill in them have allowed them to reach out in love and understanding to the people of Asia in a way that helps build bridges between cultures. What they already achieved in their young lives makes the value of our Asian Studies Program at Calvin College seem all the more important.