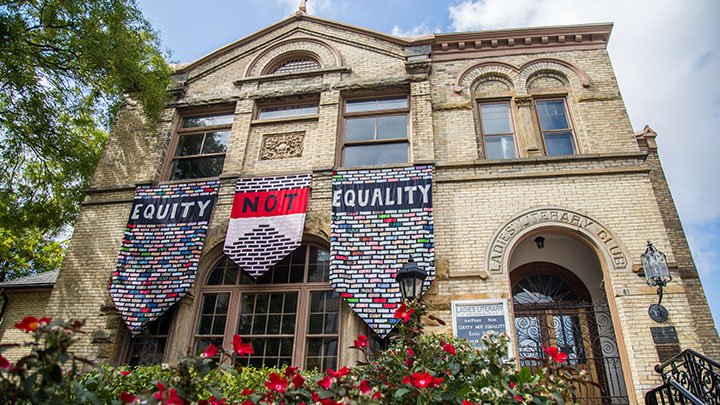 This year, Calvin received an Art Prize Venue Grant to support an art installation at the Ladies Literary Club in downtown Grand Rapids.

“Issues surrounding equity and equality—across gender, race, and socioeconomic group—can be messy or tough to talk about," said Paula Manni, the curator representing Calvin College during Art Prize Nine. “But we aren't called to the easy or nice answers; we are called to dig in wholeheartedly by considering difficult questions and holding a dialogue—often, a dialogue with ourselves and our presuppositions.”

This year, Calvin received an Art Prize Venue Grant, which they have been awarded multiple years, to support an art installation at the Ladies Literary Club in downtown Grand Rapids.

“We are able to do something a little bit different this year,” Manni said. “The Ladies Literary Club is not a typical gallery space, but it is an incredible historic building.”

“When I was applying for the venue grant, I knew I wanted to work with someone who took into account the place, space and history of the Ladies Literary Club,” said Manni. Constructed in 1887, the building itself hosted the first women’s society in the United States. “I wanted the exhibition to look back on the building’s history as an educational and learning space for women, but also take into account our current societal and political atmosphere,” she said.

We live in a society in which both gender and racial equality aren't necessarily where they should be, said Manni. “There has been a big push recently towards rights for women, but that was a big deal back in the late 1800s and early 1900s when the Grand Rapids Ladies Literary Club was formed,” she said.

Manni reached out to Eliza Fernand, an activist for racial and gender equity and equality, and a contemporary quilt artist. “I thought she would be a good fit for the show. Especially because she works with this tactile art form that has its roots in community,” she said.

Asking for equity, not equality

Fernand, who previously exhibited her work at Calvin’s 106 gallery, has created an exterior art installation. The piece consists of three quilted banners which will hang outside the Ladies Literary Club and together read: “equity not equality.”

Eliza’s artist statement reads: “Asking for equality would assume that everyone is on equal starting grounds to begin with and will flourish when offered equal opportunity. However, our societal and governmental systems do not allow this equal footing.”

Manni believes Fernand’s work addresses the three issues of education, gender and race well. Fernand’s banners, made up of patchwork bricks, represent both the building’s construction and a metaphor for women’s clubs acting as the building blocks for further women’s education, said Manni.

In the 1890s, women’s clubs were established to offer opportunities to women; however, these were mostly white women. Ladies clubs catered to the needs of one oppressed population and continued to hurt another, explained Manni.

“Fernand has done a beautiful job thinking through and combining the place and space of the Ladies Literary Club and the historic importance there while tying it to the contemporary issues we are facing today,” she said.

Fernand makes a bold statement, but in doing so she opens the door to further discussions, said Manni. “I think artists that do their work well open up a conversation or dialogue; I definitely feel Eliza is doing that,” she said.

“Eliza's art opens the door to a conversation that truly encourages, in alignment with Calvin's mission, deep thinking, just action and wholehearted living. Bringing shalom means taking time to listen, consider, wrestle, and act—and Eliza's art is a strong invitation to do so.”

Fernand will detail the methods and motivations of her work during her artist’s talk at the Ladies Literary Club on Sept. 30.