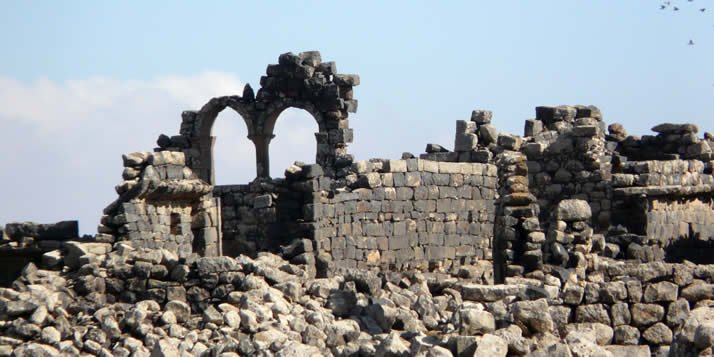 Bert de Vries involves the people of Umm el-Jimal in his efforts to preserve their antiquities.

Aerial photos of Umm el-Jimal, Jordan, from the 1950s show tents around the ruins of the original Nabataen-Roman-Byzantine town. By the time Calvin history professor Bert de Vries began studying and preserving the archeological site in the 1970s, a small village had sprung up adjacent to the ruins. In the 30 years since, that village has grown to contain old and new sections. And its residents, to de Vries’ satisfaction, are very proud of their city’s ancient roots.

“First, they were living in the antiquities,” he said. “And then, when the government took over and fenced off the antiquities, they were told to get out. They were excluded. We’re trying to turn this around and give the people a sense of their own heritage.”

In January, when de Vries held a ceremony to mark the completion of preservation and presentation efforts on House XVIII in ancient Umm el-Jimal—an event attended by the U.S. Ambassador to Jordan, embassy officials, representatives from the Department of Antiquities and the American Center for Oriental Research (ACOR), de Vries’ students, two Calvin alums, his wife Sally plus various Jordanian academics and officials—he was glad that so many of the local residents came to the party. “I rent a house there, which has a large hall in it …,” de Vries said. “So we had juice and sweets, the local baklava and all that kind of stuff, and speeches.”

There were several facets to the effort to preserve and present House XVIII, an effort funded by a $96,082 Ambassador Fund for Cultural Preservation grant from the U.S. State Department. First de Vries’ 2012 January interim class documented the building and created a detailed work plan for its preservation. From December through June, de Vries and a staff of 40 from the village and Jordan’s Department of Antiquities stabilized walls and cleared space for navigating the site.

While the preservation effort was underway, Calvin alums Paul Christians ’03 and Jeff DeKock ’01 partnered with de Vries to create a 3-D virtual version of Umm el-Jimal. Owners of the cultural preservation nonprofit Open Hand Studios, the two also helped de Vries to create a virtual museum of the site (including oral histories of Umm el-Jimal residents), work done through a grant from the Archaeological Institute of America.

A significant part of the effort is the Umm el-Jimal Education Project, which gives Jordan’s school children online access to the site. Most of Jordanian public school students don’t have an opportunity to visit the country’s antiquities, said de Vries, and their teachers do not know enough about Jordan's historical sites to serve as guides when they do: “The site becomes a playground rather than an educational site,” he said.

Working with Calvin education majors, de Vries has developed an online curriculum that will allow Jordanian students to learn about and “visit” Umm el-Jimal. Michal Jones, currently a senior Calvin education major, worked on the curriculum during a visit to Umm el-Jimal in 2010, when she was a sophomore. In collaboration with Jordan's Ministry of Education, she and then-senior Nick VanderLugt worked to edit the existing curriculum, develop lesson plans and background readings and reformat the plans.

"We did research on history, art, civics, architecture and geology to include in the curriculum and created lesson plans that could be eaily adapted for any grade level," Jones said. "It is my hope that towns all over Jordan can develop lessons that incorporate the important historical sites which are so abundant in the region. This will not only make academic concepts relevant to students' lives, but will also develop their pride and identity."

The curriculum, the Umm el-Jimal virtual tour, the museum and the other facets of the site serve as a resource not only for schoolchildren but for researchers, academics and others. “The website, it's like flypaper. It’s drawing all this interest to Umm el-Jimal,” de Vries said. “There's a direct conjunction between the website development and our on-site development that’s come about.”

And the work continues, both on-site and online. De Vries is lending his support to Al Hima (Arabic for “rejuvenation” or “renewal”), a cooperative of Umm el-Jimal residents founded by a Jordanian businessman. The group has a range of plans for supporting the ancient site, including cleanup and conservation, tour guiding, craft industries, restaurant and hostel services and an annual culture festival. The group is also developing plans for a heritage center to host many of these efforts.

It’s all part of doing archaeology well, de Vries said: “When you combine archaeology in community, you find ways of including local people in community instead of fencing them out; and giving them a sense that, as old as they may seem, these Romans and Nabataeans are a part of their heritage more than they’re part of the heritage of a Dutch Canadian from Grand Rapids.”

Though he’s nearing retirement, de Vries has no plans to quit his work in Jordan. He and Sally have many friends among the residents of Umm el-Jimal in the larger Jordanian archaeological community. “I’ll keep doing this work as long as I find it enjoyable and can work with people of integrity,” he said. 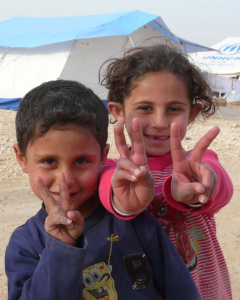 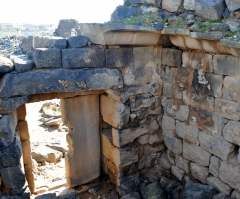 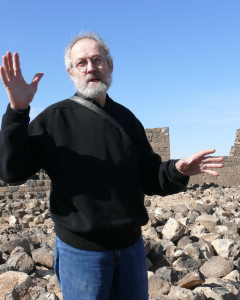 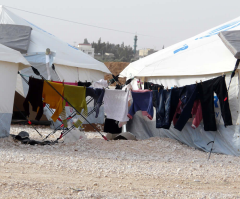 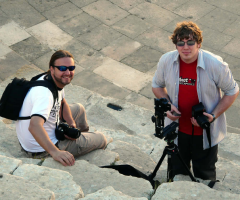 While working in Umm el-Jimal this January, de Vries had an opportunity to befriend a large group of Syrian refugees, part of a clan related to a Jordanian stonemason working at the archaeological site. The group had fled south Syria when their homes were destroyed and their lives threatened because their family members are active in the uprising against the Syrian army. “The flow of refugees tells you the intensity of the conflict, which involves the Syrian air force bombing villages,” he said. Because of the family connection, the stonemason was supporting the refugees, though it was draining him financially. De Vries and others were able to raise funds to give him some relief.

“We were refugees in World War II. We were displaced persons,” said de Vries, who emigrated from his native village of Zierikzee to Chatham, S. Ontario as a boy. “So I know the feeling of being run out of your home.” He’s grateful that, despite the current situation in Syria and elsewhere in the Middle East, Jordan provides a stable working environment. “It would be no different than going to work on a project in Illinois,” he said, “so when people think the whole region is up in flames, that’s not really true.” He was impressed by the resiliency of the Syrian refugees, who are waiting for the situation in their country to stabilize. “Many refugees never go home,” de Vries said. “These people are set to go home.”