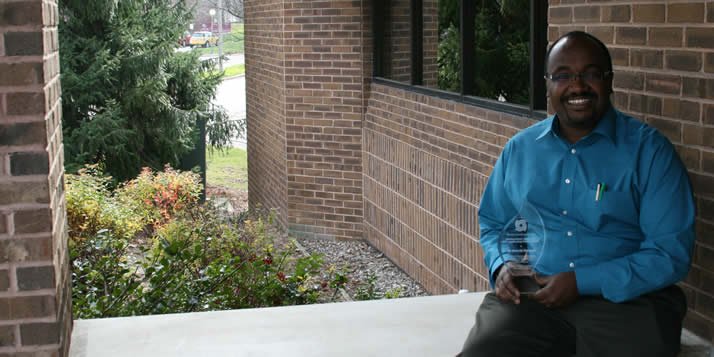 Mwenda Ntarangwi was honored with the Distinguished Leadership and Scholarship Award from the Association for Africanist Anthropology.

At the recent annual meeting of the Association for Africanist Anthropology, (AfAA) Calvin professor of anthropology Mwenda Ntarangwi was recognized with the Distinguished Leadership and Scholarship Award. On the same day, from the same organization, his book The Reversed Gaze received an honorable mention for the Elliott Skinner Book Award.

“It was really, really exciting for me as a Christian scholar, being honored by your own colleagues who are not necessarily Christian,” said Ntarangwi, who just finished a two-year term as president of the association. “I like to engage with the entire discipline and with all the people in it, and this was very affirming.”

As AfAA president, Ntarangwi organized the annual meeting of the 368-member organization, supervised the work of other leaders and compiled the association’s annual report. Prior to his presidency, he served for two years as AfAA treasurer.

At Calvin, Ntarangwi serves in two administrative roles. He is the associate director of off-campus programs, working with director Don De Graaf to develop Calvin’s semester and interim programs in other countries and states. And, as of July 2012, he is the director of the International Association for the Promotion of Christian Higher Education (IAPCHE), an organization that recently relocated to Calvin from Dordt College. The goals of IAPCHE are to train Christian faculty from colleges around the world, to encourage them to teach, research and write from a Christian perspective, and to build a global network of Christian faculty in higher education.

Ntarangwi is equal to that multifaceted task, said Joel Carpenter, the director of Calvin’s Nagel Institute for the Study of World Christianity: “He’s a very talented guy, and he’s very passionate about Christian calling and higher education,” Carpenter said. “He can not only think of something that would be great to do. He can give it legs.”

A native of Kenya, Ntarangwi grew up in a Methodist home (his grandparents were the first converts to the denomination in that region) and attended school in the eastern city of Meru. Both of his parents were schoolteachers. He studied Kiswahili at Kenyatta University, earning a master’s degree in Swahili Cultural Studies in 1990, and taught the language at Kenyatta (1988-1991), at Egerton University (1991-1992) and at the University of Illinois at Urbana-Champaign (1992-1993; 1997-1998).

As he pursued his teaching career, Ntarangwi began to view Kiswahili in a larger context. “That’s when I got a broader understanding of culture and people and the things that you do,” he said. “That’s when my teacher said, ‘You should think about going into anthropology.’”

Ntarangwi earned a master’s and a PhD in cultural anthropology from the University of Illinois, Champaign-Urbana in 1995 and 1998, respectively. His early scholarship focused on Taarab, the music performed by women for women, mainly at weddings. He also wrote about a Tanzanian hip-hop artist who focuses on social justice issues.

Of music, Ntarangwi said: “I study it as a social text that has meaning. I use music as my window into the culture.” He has also written about hip-hop in African culture, HIV/AIDS, genital cutting, African anthropologies and the mapping of youth culture.

Researching his own field

The Reversed Gaze, the book that was the runner-up for the Skinner award, grew from the journal Ntarangwi began keeping when he came to America—“my research on what it is like to be an anthropologist in America today,” he called it.

From 1998 through 2003, Ntarangwi taught at St. Lawrence University, as assistant director and then director of that school’s Kenya Semester Program. From 2003 through 2007, he taught in the department of sociology, anthropology and social welfare at Illinois’ Augustana College. Then, he learned from a friend about a position in Calvin’s anthropology department.

Ntarangwi had never heard of Calvin, but what he saw when he visited on a speaking engagement impressed him. He remembers thinking: “This is the place that allows me to love God with my mind.”

In addition to teaching anthropology at Calvin, Ntarangwi has also served, from 2008 through 2011, as the director of the college’s African and African Diaspora Studies Program and taught community development for the international development program.

“As a professor of anthropology, Mwenda excels at helping students use anthropology to understand themselves and others,” said Cheryl Brandsen, Calvin’s dean for social sciences and contextual disciplines. “Students find him to be academically challenging, winsome in his story telling, passionate about bringing his Christian faith to bear on his anthropological studies and generous and kind in his responses to their sometimes awkward questions.”

In his new role with IAPCHE, Ntarangwi plans to gather faculty and administrators in Christian higher education worldwide “to collaboratively come up with ways of embodying Christ in their teaching, learning, scholarship and administration that effectively respond to the realities of the 21st century,” he said.

And he’s eager to give Calvin students an entrée to other cultures through his role with the department of off-campus programs: “It expands their understanding of God,” Ntarangwi said. “It also allows them to step outside of their own cultures and reflect back and see themselves through a new set of eyes.”