Another Fulbright to work in Ethiopia 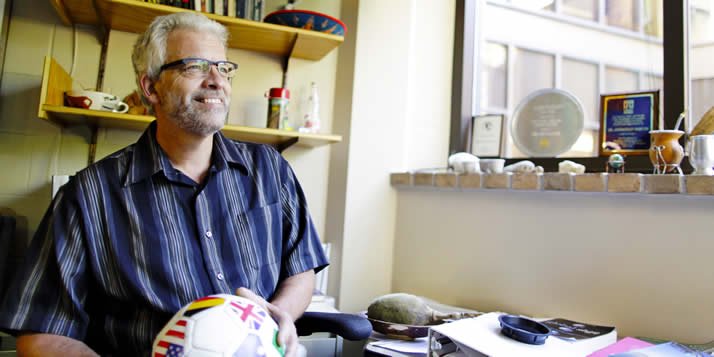 It was while he was co-leading an interim of 25 students to Ethiopia in 2010 that geography professor Johnathan Bascom had a vision for a Fulbright project in that country. Bascom saw evidence of massive investments in higher education in Ethiopia, including more than 20 new college campuses built from the ground up during the last 10 years. He also saw a way he could contribute to the country’s educational renaissance.

In 2011, Bascom landed a grant from the Fulbright Scholars Program that allowed him to spend September 2011 through June 2012 at Bahir Dar University at the edge of Lake Tana, co-teaching and researching with Ethiopian geographers and partnering with them to launch a digital atlas of the country. (A journal article from that project, co-authored with three Ethiopian colleagues, “The Surprising ‘Terrain’ of University-Level Geography in Ethiopia,” has already appeared in the African Geographical Review.)

In January, Bascom will return to his project in Ethiopia through an extension of his 2011–12 Fulbright grant (his fifth since the first to Sudan as a graduate student). Fulbright grants are awarded to 800 scholars annually by the U.S. Department of State’s Bureau of Educational and Cultural Affairs to facilitate professional cross-cultural exchanges and increase mutual understanding between the people of the U.S. and those of other countries.

“I am not at all surprised that the United States would award another Fulbright to Johnathan because I have seen him on the ground in Ethiopia, having gone this last January when he was there,” said Bascom’s geography colleague Jason VanHorn. “I can confirm his deep passion for cultural exchange in the teaching environment and his special ability to work within the bounds of his environment to be a man of renewal empowered by Jesus Christ.”

Bascom describes his work in Ethiopia as a type of “educational development.”

“In many developing countries of Africa—and certainly in Ethiopia—most education is at a chalkboard, in lecture mode. Students are rote learners par excellence,” he said. One of the things this method of learning fails to instill, Bascom said, is the ability to interpret data: “Faculty members who can use teaching methods which challenge students to think through and solve problems are greatly needed in Ethiopia.”

Ethiopia’s academics also lack country data, including geographers’ specialty: geospatial data. To address the nation’s “data poverty,” Bascom hosted a workshop for 21 Ethiopian geographers from six different universities, taught by VanHorn and Calvin geography student Emma DeVries. The workshop—the first of its kind—was designed to both teach analytical skills and motivate professors to use new methods in their classes.

The event gathered the geographers around a common project: an online atlas of Ethiopia. Using data from the Ethiopian census, the professors and student helped the geographers to upgrade their geographic information systems (GIS) skills and to map the many different aspects of their country.

The workshop was designed to get the geographers to work together: “There are cultural reasons and political reasons why people don’t typically collaborate in Ethiopia,” Bascom said. “But the workshop participants learned to value their colleagues in new ways.” Another tangible benefit to the GIS workshop was a state-of-the-art geospatial lab built for the event at Bahir Dar University. The workshop also led to the resurrection of the defunct Association of Ethiopian Geographers.

“The spinoffs from that workshop just keep going and going,” Bascom said.

A conference and a textbook

One of the reasons Bascom is returning for another Fulbright stint in Ethiopia is to help organize the first national conference of Ethiopian geographers. He will also serve as coordinator and editor for the first geography of the country authored in more than 30 years. An electronic book with downloadable data sets, maps, and bibliographic references, A Contemporary Geography of Ethiopia will weave together—via hyperlinks—maps with related narrative content. The printable, server-accessed text allows for expansion, updates, a data bank, portals to related sites and color graphics. The digital book will grow as a collaborative project, created and shared among geographers throughout Ethiopia.

While Bascom is absent from Calvin’s department of geology, geography, and environmental studies (GEO), an Ethiopian colleague, Yirgalem Habtemariam, will teach in the department. Meanwhile, Bascom will be accompanied to Ethiopia by his wife Betsy and daughter Joanna. (Son Ethan is a Calvin student.) He is eager to re-engage with the many parts of his Fulbright project.

“It is exciting to participate in this new era of higher education in Ethiopia,” Bascom said. “And my hope is to take another interim group of Calvin students back with me next year.”

At 10 a.m., Wednesday, September 26th, Professor Bascom will focus the day’s Chapel service on God’s promises for the Ethiopian baptized by Phillip in Acts, written by the prophet Isaiah 750 years earlier.