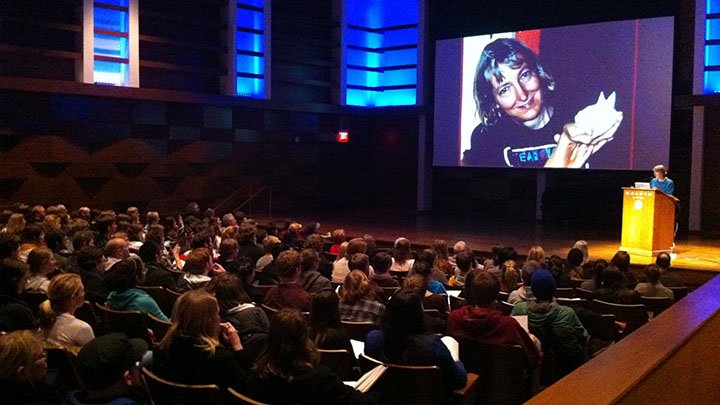 Creation care is an integral component of a Calvin education. From the strategic plan to the curriculum, from faculty and student-led initiatives to community-wide efforts like Plaster Creek Stewards, a commitment to working toward shalom for all creation is deeply woven into the community.

Matt Halteman, a professor of philosophy, encountered this reality when he joined the Calvin faculty in 2003. Growing up Mennonite, Halteman says he was well aware of the connections between food and social justice for human beings. But it wasn’t until he came to Calvin that he began to consider the impact of food systems on God’s creation as a whole.

After doing some teaching, writing and lecturing on these topics, Halteman, in 2008—with the help of a few colleagues and a generous donor—launched the Animals and the Kingdom of God Lecture Series.

“There’s a lot of excellent work out there on these topics, but it doesn’t always get the attention it deserves,” said Halteman. “This lecture series has enabled us to bring world-class people doing top-flight work on creation care and give them a podium to talk about these pressing issues in a public way.”

The lecture series is now celebrating its 10th anniversary. On Tuesday, April 4, leading philosophers and theologians in the field will gather on Calvin’s campus to give public lectures, engage in panel discussions and share a potluck dinner with attendees. The keynote public lecture will be given by David Clough, one of the world's leading theologians working on animal ethics.

While food ethics and veganism aren’t new topics, their coverage at Calvin is still unique, Halteman says. As the only Christian college to have a named lecture series devoted to animal justice, he claims, Calvin is amplifying Christian scholarly voices in a discussion often shaped by secular perspectives.

“What makes Calvin different from many Christian colleges,” Halteman maintains, “is our deliberate engagement with issues that Christians are often tempted to avoid. In bringing the best and brightest to our campus to stretch and challenge us on these topics,” he continues, “we’re taking things that weren’t previously under discussion and making them a part of the conversation.”

Halteman says it’s really just a matter of “deepening our understanding of one of the basic mandates of the Reformed outlook—to seek the flourishing of all as it plays into this vision of shalom.

“When it comes to creation, the Reformed vision is not human-centered to the detriment of God’s other creatures,” said Halteman. “The vision is theocentric: God is sovereign and Jesus is Lord over every square inch of creation. Animals are crucial to the structure, function, and beauty of God’s world and God called them very good, which gives us insight into why they are the first responsibility God gave to human beings (to name them and care for them).”

Inviting all into the conversation

Though a vegan himself, Halteman stresses that these events are open to anyone interested in discerning how to live a more creation-friendly life, however they understand that goal.

“The aim is to invite all comers—omnivores, vegans, and everyone in between—into a conversation about why our attitudes and actions toward creation should matter for Christians,” said Halteman.

The lecture series will feature sessions on “Prospects and Problems for Christian Veganism,” “Intersectional Veganism(s),” and “Christianity and Animal Ethics.” The events are dedicated both to pioneering scholarly discussion on these matters and to accessible public education on underrepresented but crucially important topics.

The lecture series is made possible by a collaboration between the Animals and the Kingdom of God Lecture Series at Calvin College, CreatureKind—a ministry of Evangelicals for Social Action from the Sider Institute for Christian Ethics at Eastern University in Philadelphia, and Calvin Students for Compassionate Living.

Jonathan Manni is an engineering major and co-chair of Students for Compassionate Living, one of the sponsoring organizations of the Animals and the Kingdom of God lecture series.

His Calvin story is featured in Every Moment.

“I didn’t really have a great frame for the way to think about ethical issues in a certain way,” said Manni. “I really value the fact that I’ve had to take courses outside of the technical math, engineering focus. I’ve been able to use those classes to benefit the way that I think about the world.”