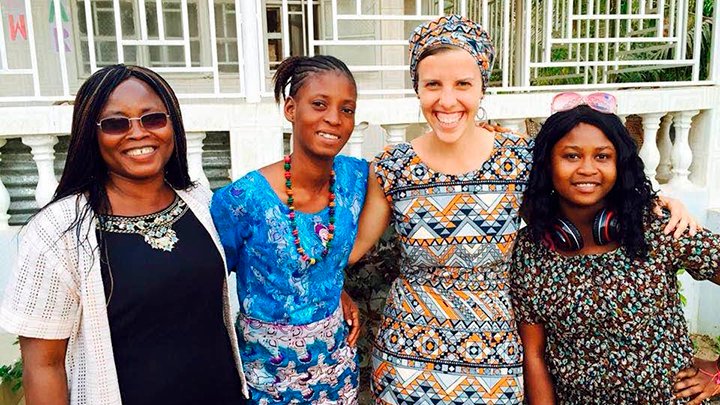 Sometimes our greatest inspirations come from the simplest sources. For Sarah Kluitenberg ’13, her inspiration for majoring in education came from remembering a high school graduation card encouraging her to work with kids, and watching a movie.

“I always had a love for kids while teaching Sunday school and babysitting, but I never thought about that as my future. Then I watched the movie The Blind Side, and that day, I said, ‘I’m changing my major to teaching.’ So I changed my major [from engineering] to elementary education and math my sophomore year,” she said.

Little did Kluitenberg know that this decision would lead her two years later to becoming an elementary school teacher for Christian Reformed Church primary school in Kabala, Sierra Leone.

During the first day of Kluitenberg’s senior year, professor Johanna Kuyvenhoven told her education class about an opportunity to teach in Sierra Leone at the school she actually helped establish. Kluitenberg said she was interested, raised funds through Christian Reformed World Missions and was on her way to Sierra Leone the following August.

Being one of the few Westerners in her community, Kluitenberg had to take initiative in figuring out how to apply what she learned at Calvin to the drastically different education system of Sierra Leone.

“In the U.S., teaching is much more interactive and engaging, but in Sierra Leone, the teacher lectures and the students copy whatever the teacher writes on the blackboard into an exercise book. They study when they go home. For me, that was very foreign,” she said.

However, after working through these challenges in Sierra Leone, Kluitenberg hopes to continue her learning by attending the University of London in fall 2016. She will be pursuing her masters degree in development education in global learning in hopes of eventually using education as a tool for development. “The passion that I have, ultimately, is to work with teachers to develop the way they teach and build their capacities in the classroom,” she said.

While a student at Calvin, Kluitenberg developed a strong relationship with Christ, the fount from which she believes her love and service for others must flow.

“I realized that I can go overseas, in other countries and in the U.S., but if I don’t have a strong relationship with Christ, then there’s no way I can serve others effectively,” she said. “That is the foundation of being able to serve effectively and work with other people, especially those coming from different backgrounds and cultures.”

Since Kabala’s population is predominantly Muslim, Kluitenberg feels that she can use education at CRC Primary School as a tool to share the gospel. She hopes Calvin students will pursue their own kingdom-building journeys with boldness and intentionality within their own community.

“Anywhere you go, whether your hometown, the U.S. or another country, take advantage of the opportunity to get to know that place,” she said. “Go out of your comfort zone—God has called us to be uncomfortable. Challenge yourself to know and learn about the people you’re with.”