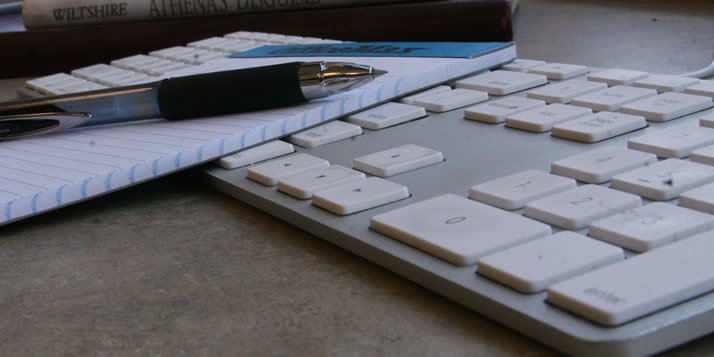 Calvin senior Melodie Callanan majors in psychology and works two jobs: one as a receptionist for Calvin’s main switchboard and one as a receptionist in Calvin’s IT department. Last year, Callanan was trying to find a little wiggle room in her spring course schedule when she heard that Calvin was offering a pilot program of online classes. She decided to take one of her core courses—history 152: “The West and the World II (honors)”—online.

“I was a little worried that I wouldn’t be able to keep up with the work,” she said. “I was worried because it was different than what I was used to.”

Despite her anxiety, however, Callanan found that she adapted quickly to online learning. She regularly logged in to Moodle, Calvin’s instructional learning system, to work through the week’s-worth of assignments posted there. She participated in class discussions on the online forum. And every Monday night, she would meet with her class via video conference. “I had a lot of free time, and I really enjoyed the professor, the way he taught—he was funny,” Callanan said. “It was just a great experience.”

Callanan’s professor, history department veteran Dan Miller, likewise enjoyed the challenges of working in an online environment: converting the content of an established class to an online format and participating in the forums where his students discussed that content.  “I had to become a lot more adept at using Moodle,” he confessed.

Miller particularly enjoyed his class’s weekly video chat. “It’s like a Skype session, but there are multiple users plugged in. I asked the students questions, and they give me answers,” he said. “That’s one of the happy discoveries of this medium: that you can have good discussions online.”

History is one of five classes—the others were in astronomy, Latin, education and computer science—that Calvin offered online in the spring of 2012. The motivation for the new program, say those involved in it, was demand.

“Online education has become such a massive trend in higher education that we can’t afford to stand on the sidelines. We had to jump in and see if we could do it well,” Miller said.

Calvin is trying to reach more than one audience with online classes, said Rob Bobeldyk, the assistant director of teaching and learning in information technology (CIT). One group is high school students, particularly those who have had the benefits of gifted and talented programs in middle school: “When these kids reach high school, they’ve often exhausted the resources the high school can provide,” Bobeldyk said. Online classes are also  attractive to Calvin students who would otherwise be taking their core credits at other institutions, he said.

The pilot program—which originated from a presentation Bobeldyk made to the office of the provost— is a more intentional effort to put Calvin excellence within reach of a wider audience. “Calvin has good stuff, and if we can, we want to share it more broadly,” said Calvin provost Claudia Beversluis. “Often when you see that a college in offering online courses, they’re working with a vendor,” Beversluis said.  We wanted our courses to have the same quality as our regular courses have.”

Joining Bobeldyk and Beversluis in administering the pilot program are Mike Stob, the dean for  institutional effectiveness, mathematics and statistics, Rick Zomer, the director of pre-college programs and visits, Kristin Spahr and Daniel Christian, instructional designers in IT, and Todd Hubers, the director of human resources.

Each of the five professors had to commit a year to the pilot program, which included 13 weeks of training with Calvin’s instructional designers. “We help them to convert their face-to face course into an online course,” Bobeldyk said.

Once teaching commenced, the five professors also found ways to stay connected to their virtual classes. Some used the video chat. Vanden Heuvel stayed in constant touch via cell phone and e-mail. Christina Pickett, an elementary education major who took his online astronomy class said Vanden Heuvel was easy to reach with questions: “I think in an online class the bond between professor and student is stronger,” Pickett said.

Vander Linden—who taught introduction to computing in the pilot program—believes that quality of faculty engagement could be a way Calvin distinguishes itself in the online education market. “Why would you take artificial intelligence from Keith Vander Linden when you can take it from the vice president of research at Google?” Vander Linden asked. “The answer is, ‘Because he has 58, 000 students in his class.’… I have a meeting this afternoon with a student who’s struggling. We always have students like that. If I have 58, 000 students, I just let him fail.”

Calvin online pilot program has already been approved for a second year. Bobeldyk is getting calls from high schools and other institutions that are eager to partner with Calvin. “We have people lobbying to get into those courses,” he said. “We have enough interest that we probably could have maxed out two more offerings of history and one more offering of astronomy.”

And Callanan is pondering how online education might figure into her future schedule: “I kind of like the independence and the responsibility,” she said. “If I had all online classes, I would miss the class atmosphere, I think, but I think I would like both.” 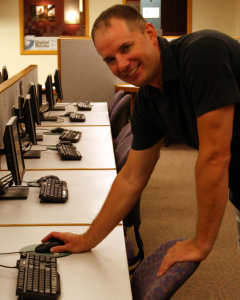