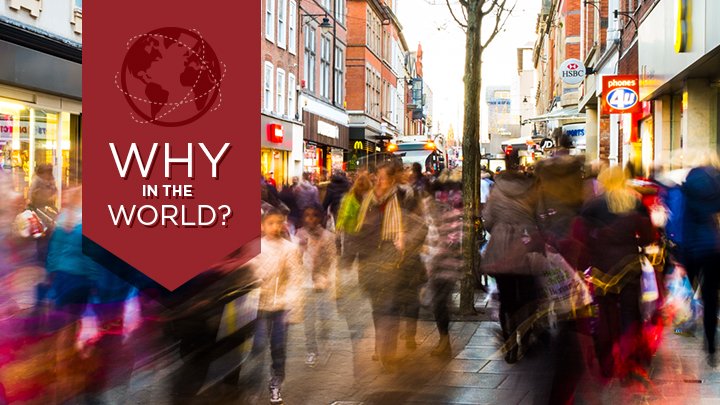 Focusing on today's headlines through a Reformed lens is the way Calvin thought leaders fearlessly engage with and boldly impact culture. Business professor Tom Betts takes a closer look at Black Friday sales trends and considers the reasoning for and impact of stores opening their doors on Thanksgiving Day.

What is the economic impact for a store deciding to buck the trend of opening their doors on Thanksgiving Day?

For any specialty store that has a loyal following, it’s not that big of a risk. If I can’t buy my hockey stick, for example, on Thursday, I’m going to go on another day to get it from the store I’m loyal to. But, for general merchandisers, they’ve made their own bed. If the competition is open, they have to be open. It’s so difficult for Walmart or Target to stay closed if the competition is open. They will lose incremental sales.

With online shopping on the rise, will there continue to be demand for Thanksgiving Day shopping, even Black Friday shopping in the future?

I think so. But stores will have to make it fun or an adventure for people to come. You could almost view Black Friday shopping like gambling or fantasy football, where consumers compete against other people. It doesn’t cost them much, but makes the games more interesting to watch. It’s the same with adventure shopping…will I get there in time...will I get the deal? There’s a whole group of people that find the adventure really thrilling and stores still need to cater to that segment of the population. For other consumers, it is a group activity that they share with their friends and family. So stores need to make it an enjoyable experience and one where people most of the time get what they are looking for, otherwise they won’t come back. Also, if retailers are going to be open, they shouldn’t offer the exact same deals online at the same time—it takes the fun out of the adventure.

Do you think it’s more feasible that we will see more stores closing their doors on Thanksgiving Day OR pushing their in-store deals up earlier and earlier in the day?

I think the economic impact on the stores is the biggest factor. I am seeing a trend of stores offering “Black Friday all month long” or “Early Bird Black Friday Deals.” If Black Friday becomes just another name for great sales at any time and not a special one-day event, it will lose its value in the consumers’ eyes and stores are going to find that it’s not worth the major hassle to open as they are not losing that much to shut down. But, if retailers can continue to create the right environment, then I think it will stay about the same. I don’t see stores being open all day on Thanksgiving. They are already playing up to the edge of consumer tastes by opening in the evening. If stores open all day I think people will get upset—at least in the next few years.

I think online will be a factor as well. There is some thought already that ‘I can shop that day online anyway.’ So maybe stores will just say ‘if you want to shop on Thanksgiving, we have our specials online, go there.’

What is the impact on a company’s public perception AND on employee morale for those stores that remain open on holidays, like Thanksgiving Day?

I think it has a pretty minimal impact on the perceptions of those people shopping. If people want to shop on Thursday, they are happy about it. And for those who look down on it, they can shop another day and get a similar deal. So, from a consumer’s point of view, there’s not a lot of negative here.

On the flip side, I think it’s awful for employee morale. If stores open at 6 p.m., many employees have to be there at noon setting up. So, it ruins their holiday with their families.