Always a phenomenon: a new book on "Messiah" 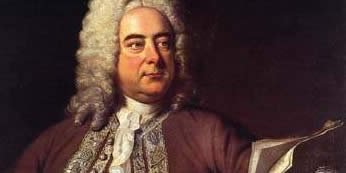 Mention the Hallelujah Chorus or play the first few chords, and it’s difficult to keep people from bursting into song. At least that was the case in a recent surprise performance in a Canadian shopping mall, where singers erupted into the popular refrain in a food court while unsuspecting shoppers stopped to listen and join in. A video of the event, posted on YouTube, was viewed by more the 6 million viewers in just two weeks.

The chorus— undoubtedly the most well-known piece in George Frederic Handel’s masterpiece— is just one of the intricate pieces that is known collectively as Messiah, the  most beloved choral work by the 18th century composer and the subject of a new book by Calvin music professor emeritus Calvin Stapert.

“Every year, Handel’s Messiah receives an untold number of performances around the world, often before very large audiences,” Stapert writes in his preface to Handel’s Messiah: Comfort for God’s People (Eerdmans Publishing Co., 2010). “The Messiah phenomenon has no parallel in music history. No work of art has survived, let alone thrived, on so many performances, good, bad, and indifferent, by and for so many people, year after year, for such a long time.”

Messiah has flourished at Calvin as well. The college has hosted yearly performances of the oratorio for 91 years. “I think it’s mainly because we have built a strong family tradition in the community,” said Calvin music professor Joel Navarro, who took over conducting the oratorio in 2003. “For many families, Christmas doesn’t start until they have seen a performance of Messiah by the Calvin Oratorio Society. That’s a very strong Dutch, Christian Reformed thing, and that’s something we’re very grateful about.”

In his book, Stapert attempts to enhance appreciation of the work by increasing understanding of it, which he does from three different perspectives.

The first part of the book offers a history of oratorio, Handel and Messiah. “There were a lot of very remarkable coincidences and series of events that led to something very unlikely,” said Stapert. “A German Lutheran composer working in England writing Italian opera composes this oratorio, a genre which didn’t even exist in England until he invented it 10 years before.”

The work did not garner immediate acclaim in England, though it was celebrated in Dublin, Ireland, the city where it was first performed. In fact, initially, Charles Jennens, who compiled the text for Messiah, was not pleased.  “Even before hearing the oratorio, he voiced his dissatisfaction, Stapert writes. “ ‘His Messiah has disappointed me,’ he wrote…because Handel ‘set [it] in great haste, tho’ he said he would be a year about it & make it the best of his Compositions.’” Later Jennens would come to look more favorably on the work, though Handel himself never considered it his best work, Stapert said.

The second section of the book reflects on the purposes Jennens had for compiling the text and Handel for setting it to music. “In our culture entertainment is entertainment and devotion is church worship or something more like that,” said Stapert. “In Handel’s day, his art was entertainment and teaching. When he shifted to oratorio, he told different stories with the same kind of purpose with Messiah being the greatest one of all.”

The third and largest part of the book “provides commentary on the theological message of the words and the way Handel’s music conveys and interprets that message,” Stapert writes.

“Handel was ideal for this text,” said Stapert. “He was a composer with a real dramatic flair to take these texts and give them vivid, powerful, musical expression.”

In this section, Stapert attaches significance to texts as they are matched to musical styles, verse to musical movements and even words to particular notes.  For instance, the overture to Messiah is in the style of a French opera. “The stately movement of the dotted rhythms suggested royal pomp and spendor… , “ writes Stapert.

Another example describes the broken melodic lines that accompany the verse, “Thou shalt dash them in pieces like a potter’s vessel.”   Stapert writes: “In the voice part the words ‘BREAK them,’ ‘DASH them,’ and ‘PIE-ces’ invariably occur on downward leaps, illustrative of throwing down, dashing to the ground.”

In addition, there is meaning behind the selection and order of the texts as chosen by Jennen, Stapert writes. “If you don’t see the whole progression, in other words, you listen to the works as one favorite number after another, you will miss a lot,” he said.

While detailed in its analysis, the book is meant for the general public, Stapert said. “That would be people who know Messiah, but know it somewhat casually… ,” he said. “I was particularly pleased when someone said, ‘I don’t know anything about music, but my wife is in oratorio so I picked up the book, and the history part was so fascinating, I just kept reading.” 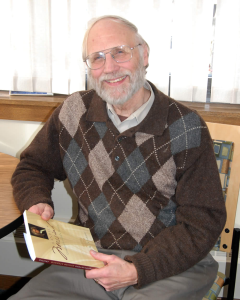 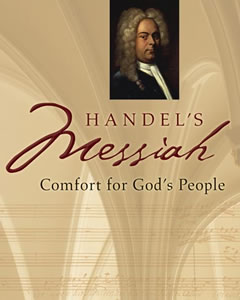 The cover of Handel's Messiah: Comfort by God's People