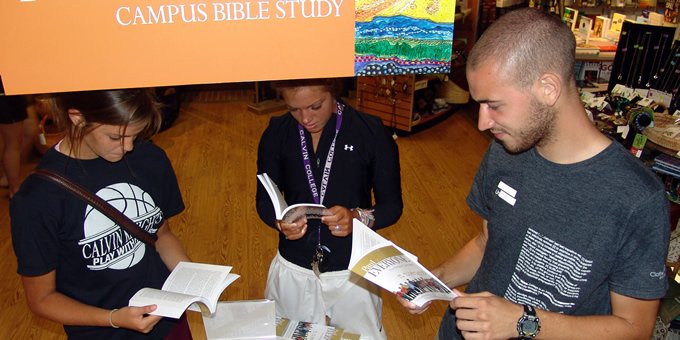 For Calvin associate chaplain Aaron Winkle, the campus-wide Bible study on Philippians, which officially kicks off on Sunday, September 12 at LOFT, the on-campus worship service, feels a little like flying a kite.

"You can build the kite," he said, "and you can toss it into the air, but without the wind, it's not going to work very well. When we started dreaming about a Bible study for the whole campus, we knew we could get it started, but that others would make it fly."

Calvin chaplain Mary Hulst, who will preach at the first LOFT (Living Our Faith Together) service on September 12 on Philippians 1, added that after some six-plus months of planning and meeting and dreaming and praying, it's a thrill for her and Winkle and their colleagues in campus ministries at Calvin to watch the Bible studies about to launch.

"In some ways our job now," she said, "is to stay out of the way. People got on board with this, they got excited about it and they will take it places we hadn't even thought about."

One of those people is Calvin senior Amanda Armour, a Germantown, Wis., native who is an interdisciplinary major in English, communication arts and sciences and religion with a writing minor. When she heard about the Bible study, she decided to offer to lead a group of freshmen women.

"Calvin has provided me with a community of support that I treasure," she said, "but I know that freshman year can be a difficult adjustment for many students. Because I was not part of a Bible study my freshman year, I missed out on an opportunity like this to study God's word and build close friendships at the same time.”

Winkle said he hopes the Philippians Bible study will help students, faculty and staff to start the year out right.

"There are lots of choices that face students especially at the start of a new school year," he said. "Giving our campus participants and leaders a chance to really spend time with God's word presents people with a choice, and we hope it's one they will take advantage of."

Studies on campus and behind bars

Calvin director of church and community relations Carol Rienstra will lead one study on campus for a mix of students, staff and faculty and another with Celebration Fellowship, a prison congregation at Ionia Bellamy Creek Correctional Facility sponsored by the Christian Reformed Church and the Reformed Church in America.

She said that bridging a gap will be one of her goals this fall.

"A lot of the men (at Ionia) will have a perspective on Philippians that is kind of unique,” said Rienstra. "We will meet on Monday nights in the prison and then on Tuesday mornings, I will lead (the study) on campus. So I hope to bring the insights of both groups back and forth to each other.”

Rienstra's two studies fit perfectly into what campus ministries had hoped would happen with the new effort.

"We have had Bible studies in the residence halls for years," said Winkle. "But when we started thinking about this Bible study, we talked about what we could do to broaden the level of involvement. How could we get off campus students involved? How could we get faculty and staff involved and maybe even make some of these studies inter-generational? To see that actually happening now, to see something like what Carol is doing, is really exciting."

Philippians with many accents …

The Philippians studies have gone in some unexpected directions, said Hulst and Winkle.

"Early on," said Hulst, "David Smith (a German professor) was involved in one of our focus groups, and he said: 'What about a Bible study in German?' And the light bulbs went on for us. He e-mailed his colleagues in foreign languages and now we will have Bible studies in Spanish and Korean and even Greek. So that was one good example of how the people who got involved took this small idea and made it even better."

Those sorts of "affinity group" Bible studies—people who already share a common interest gathering around the study of Philippians—have been an unforeseen, but much-appreciated, outgrowth of the project for the folks in campus ministries. "We didn't expect it, but it's been great," said Winkle of the coming together of people around such interests as athletics, theater, nursing, psychology and even yoga.

Other Philippians Bible studies have taken the concept and put their own special twist on it, including one study led by former chaplain Dale Cooper which will, over the course of the semester, memorize the entire book of Philippians. Another led by the Meeter Center's Paul Fields will look at John Calvin's commentary on the book. And there will be Bible studies following the Calvin program via the Philippians website at churches as close as Michigan and as far away as Montana—and Calvin's semester-long programs in Beijing and Honduras.

Calvin also is partnering with athletic colleague and competitor Hope College, including a pulpit exchange to be held in November between Hulst and Hope dean of the chapel Tryg Johnson.

For former Calvin dean and current biology professor Uko Zylstra, the entire effort is a fantastic opportunity to practice what he preaches.

"I think it is important to be able to relate to and mentor students outside of a classroom or lab context," he said. Zylstra will be co-leading the Bible study with his wife in his home. "It's been my experience that students enjoy getting to know faculty in their home setting," he said. "They get to engage with faculty in a more holistic manner.”

In fact, Zylstra's words fit the number-one goal for the study as outlined by the campus ministries team some six months ago: to encourage students, faculty and staff to read and study the Bible in community.

"What Uko and so many others are doing is exactly what we had prayed would happen," said Winkle. "It's exciting to see what God might have in store for this campus this fall as so many people come together to study His word." 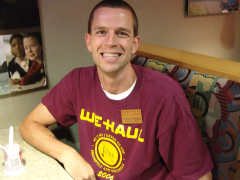 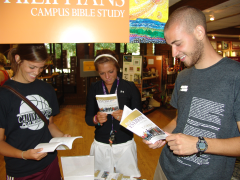 Students, staff and faculty interested in signing up for the Philippians study can still do so between now and the end of September. The all-campus Bible study has two texts: Paul for Everyone:  Philippians, by N.T. Wright, and Dwelling with Philippians: A Conversation with Scripture through Image and Word, a new book published by the Calvin Institute for Christian Worship in collaboration with Grand Rapids-based publisher, Eerdmans. (The second text, in fact, was put on a fast-track production schedule by the CICW in order to have it ready for the September launch of the study.) Both books, said Winkle and Hulst, are very accessible and illuminate the book of Philippians in ways they believe will be helpful for the study participants. They also set up the Bible study so that each week the reading for that week would happen at the beginning of the hour-long session, thus creating a Bible study format in which people did not have to do the readings ahead of time. "We wanted to eliminate as many barriers as possible for people," said Hulst. She noted too that Bible study participants are able to get both books through the Campus Store at reduced rates and that leaders were able to get their books for free. The campus ministries office also provided two-hour training sessions for all leaders in late August and early September and set up a comprehensive website with numerous ideas for study questions. Calvin theological librarian Lugene Schemper  has created a section geared to the study on the Hekman Library website filled with guides, tutorials and even a YouTube clip.