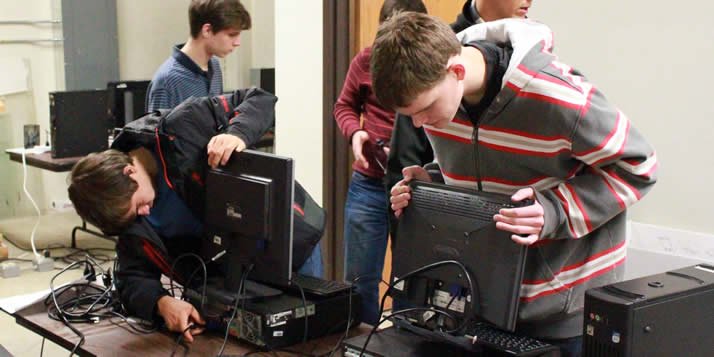 Members of Calvin’s computer science student organization Abstraction recently gave up a Saturday afternoon to re-tool computers that will find a new home in Nicaragua. The students convened on November 19 at the headquarters of the Christian Reformed Church in North America (CRCNA) and worked on computers donated by that organization to an organization that plants Christian schools.

“The Abstraction club looks for a service project every year around Thanksgiving,” said Calvin computer science professor Victor Norman. “It gets them off campus, serving; it’s the idea that they can use their computer skills for something other than playing computer games.”

The students worked at CRCNA overhauling the machines from four through 10 p.m. They installed programs, configured the machines to use international keyboard settings, set up initial logins and installed Spanish language packages.

The latter item on the task list gave the programmers, including Norman, some fits. “It’s just something none of us had ever done, so we had to experiment with it at first,” he said, adding, “We didn’t hardly know the Spanish words for logging out.”

The real challenge, however, came from working on the CRCNA’s old hardware.

“The computers were all without hard drives when we got there,” said computer science major and Abstraction president Andrew Cooper. “We soon got them in but many didn't work or were not equipped to handle a DVD. We ended up switching many of the DVD drives from the broken computers into the computers that had CD drives. Also at one point we blew the power which was an interesting thing to have happen.”

The group kept a pile of spare computer parts handy, to allow them to swap things out and see what worked. Norman also brought cards along the programmers something to do while things were installing.

The Abstraction members have plenty of installing experience; their signature event is, in fact, named Installfest, an event where the organization installs Linux free on the machines of all attendees. “I relied on them in some ways,” Norman said about the November 19 project. “There are a lot of those guys who know more about hardware and packing old computers than I do.”

The refurbished CRCNA computers are headed toward the Nehemiah Center, a nonprofit in Managua that trains Christian leaders. “These computers are going to end up in the hands of Christian school teachers,” said Shirley De Vries, the CRCNA IT director who partnered with Calvin on the project. “It’s part of our process to re-purpose our old equipment for people we partner with in ministry. I didn’t have time to make that happen, but the students made it happen.”

The CRCNA and Abstraction are still trying to raise $775 to ship the computers to Nicaragua. “The idea is that we get them out there in the beginning of their school year, 2012,” De Vries said.

The event was fun, Cooper said, and it allowed Abstraction members to get to know one another.  It also gave them an opportunity to serve : “I believe God gave us our skills with computers for a reason. Not just everyone can do what we did to refurbish computers. So we should use our God-given skills to help others,” he said. “Also computers are great tools. They help schools introduce them to students and teach them skills and help them. I see it as another area that can spread God's Word. I mean how many people surf the Web?” 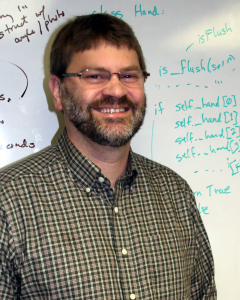