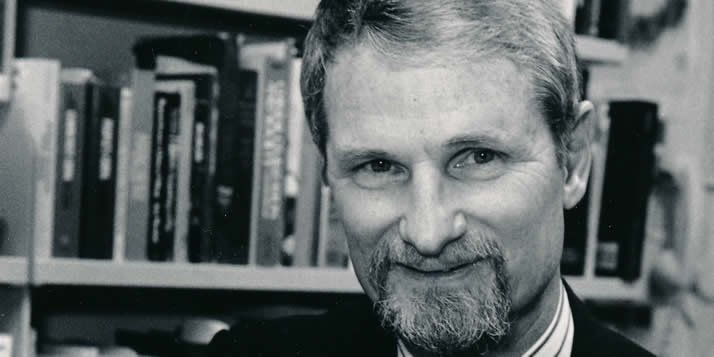 Calvin College professor of history emeritus Ed VanKley has passed away at the age of 72 from complications related to pneumonia. His death occurred on Wednesday, October 9 at Spectrum Health in Grand Rapids after a short hospital stay.

The 1958 Calvin graduate and South Holland, Ill., native was perhaps best-known for his expertise on the relationship in the 17th century between Asia and Europe. He and Donald Lach, his former professor at the University of Chicago, collaborated on a four-book volume on the connections between the two continents. They worked for 16 years on Volume III (titled A Century of Advance) of Asia in the Making of Europe.

And at the time of his death VanKley was working on Volume IV.

Volume III alone consisted of four separate books totaling 1,917 pages with 433 plates, 158 pages of bibliography and a 112-page index. Research on the book took VanKley around the globe as he traveled to China, the Philippines, Hong Kong and Europe as well as to libraries at the University of Michigan, Harvard and the University of Chicago among others. He mastered seven languages (Dutch, French, German, Italian, Portugese, Latin and Spanish) in order to do the research.

Just editing the book took four years, an experience that left the long-distance runner (he completed the Old Kent River Bank Run in Grand Rapids several times) weary. "That (editing) is not pleasant work," he said in January 1994, soon after the book's release. He estimated at the time that he had read the 2,000-page book "at least three times and probably more by the time we were done reading each other's chapters, editing and doing everything else."

Reviews of the book made the work worthwhile.

The book was praised by The New York Review of Books as "the most comprehensive work on the history of Western perceptions of pre-modern Asia ever written." Meanwhile the Washington Post's Book World said "one can hardly deny the impressiveness of the contributions of Lach and VanKley who have shown in magisterial detail that many of the later attitudes of European superiority toward Asia simply were not present in the 17th century." The New York Review of Books review also called VanKley a "skillful bibliographer and historian of the seventeenth century in Asia." Reviewer Jonathon Spence added that "it is a book full of amazements" and concluded by comparing the effort of Lach and VanKley to the achievement of Joseph Needham, an analogy akin to comparing the work of a mathematician to Albert Einstein.

In Volume III Lach and VanKley argued that in the 17th century Europeans did not embrace theories of white racial superiority in their dealings with Asia, rather they looked somewhat longingly at a country that was big and rich. The authors also examined the ways in which different European communities perceived Asia. In regards to the themes of racial tolerance and intolerance present in Volume III, The Washington Post's Book World concluded its review by asserting that the work of Lach and VanKley reminds us that the "past is not always less advanced than the present."

Colleagues of VanKley remember him not just a world-class historian and scholar, but also a dedicated Calvin faculty member.
Professor of history Bert de Vries, a colleague and a friend, says: "Ed was an extremely bright person who loved being a scholar and being in a highly intellectual atmosphere at Calvin. He was a really critical thinker and I mean that in the positive sense of the word. He could cut to the core of an issue. But he also really enjoyed serving the institution. He never said no to an invitation to serve. He was the epitome of participation in the faculty governance process that we hold so dear at Calvin."

Those words were echoed by professor of history emeritus Herb Brinks, a former Calvin colleague and also a long-time fellow member of Calvin Christian Reformed Church in Grand Rapids. "He was very proud of Calvin College," says Brinks, "and I think in a small way he was pleased to be part of a generation of scholars, people like (Nicholas) Wolterstorff and (Alvin) Plantinga, that put Calvin on the map."
VanKley's own words bear out Brinks' summation.

In a 1995 story in The Advance, a West Michigan weekly, VanKley said coming back to Calvin after completing his Ph.D. at the University of Chicago was a natural move. "I had a big debt to this college because it did wonderful things for me as an undergraduate," he said. "This was a place where I could be a scholar and contribute to shaping the lives of young people."

In a 1995 retirement tribute in Spark, the Calvin College alumni magazine, VanKley spoke of what had kept him at Calvin for 33 years. "I stayed on," he said at the time, "because I thought Calvin might have a better chance than others at being the sort of institution that encourages the connection between Christianity and scholarship."

Thanks in part to his contributions it is.

Read a tribute to Ed written in 1995 by his brother.
Read from the collection of shared memories.