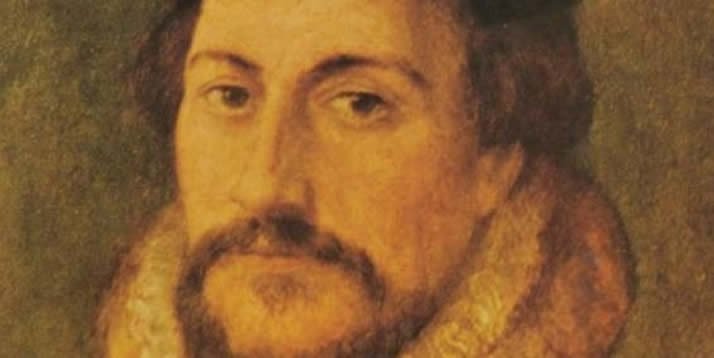 This year there would be 499 candles on John Calvin’s birthday cake—too many to dodge the college’s restrictions on open flames. Still, several hundred college employees will gather for a party that, over the past 25 years, has grown into a Calvin tradition.

Visitors to Calvin's campus mid-morning on July 10 are likely to see offices with far fewer employees than normal. On that day each summer the prospect of celebration will have carried off the majority of faculty, staff and student employees to one place: John Calvin’s birthday party. There, cake and punch are passed around while party-goers listen to an address often made by the man himself, John Calvin.

This year there would be 499 candles on John Calvin’s birthday cake—too many to dodge the college’s restrictions on open flames. Still, several hundred college employees will gather for a party that, over the past 25 years, has grown into a Calvin tradition. Karin Maag, professor of history and the director of the H. Henry Meeter Center for Calvin Studies, has made significant efforts to keep the tradition alive and well. When asked why the college celebrates the birthday of a man born nearly 500 years ago, she said:

“We continue the tradition, really, because it has become a tradition. And it’s always nice to have a celebration, especially to honor the person for whom the college was named. It’s something fun to do and gives people a different view of the person John Calvin was.”

Strange beginnings: a door and a Banner

If the typical view of John Calvin is one of a serious, humorless man, the beginnings of the tradition to celebrate his birthday are quite the opposite.

It all started with two unlikely objects: the July 10, 1959 edition of the Banner and an office door in the Spoelhof Center, both of which belonged to former vice president for advancement Peter Vande Guchte. Strangely enough, it looked as if there were two faces on the door, and not just any faces.

“In the woodwork on the door you could see the profile of John Calvin,” said Vande Guchte.

John Calvin could also be seen on the cover of the 1959 Banner that commemorated the reformer’s 450th birthday. Vande Gutche’s then administrative assistant Diane Vander Pol, happened to see the edition in her boss’s files and through conversation discovered that they both shared a birthday with the reformer.

“I remember seeing that edition of the Banner when I was a little girl and realizing for the first time that I had the same birthday as John Calvin,” Vander Pol said.

It was then that she decided to play a little prank on her boss. On July 10 she decorated his office door to show two profiles, one of John Calvin and one of Vande Guchte—they were wishing each other a happy birthday. After that, the vice president and assistant team had a great idea.

“We thought, John Calvin’s birthday is July 10. We’ll throw a birthday party every year and wink at each other because we’ll know that the party is really for us,” said Vande Guchte.

A tradition grows (and food services saves the day)

The first birthday party, celebrated by a small group of development staff, is thought to have happened in the summer of 1982.

“The first parties were really impromptu and one of them almost didn’t happen because we forgot to order cake! Thankfully, food services made a cake anyway and bailed us out!” said Vander Pol.

Soon the annual party evolved into a campus-wide celebration and institutional tradition. Vander Pol created a corduroy hat patterned after the hat worn by John Calvin in some of his most famous portraits and, along with Vande Guchte, bestowed it upon a “two-minute lecturer,” a professor or staff person asked to give a short, humorous speech during the celebration.

“I was a bit of a clown, so we made a real ceremony of the cap and robe donning,” said Vande Guchte.

Howard Rienstra, the director of the Meeter Center from 1983–1986, was the first to receive the John Calvin hat and give a two-minute lecture.

“John Calvin has found the missing link in the evolutionary chain. Now—what is the missing link? It’s woman!” she said before reading a portion of Calvin’s sermon on 1 Timothy 2:12–14.

One year, soon after the John Calvin birthday parties began, alumni and public relations director Mike Van Denend recalls there being a great rush of sound on the Spoelhof Center patio heralding the reformer’s special day. It was Vande Gutche’s new assistant (Vander Pol had assumed the role of documents librarian at the Hekman Library), playing the sound of jets flying overhead on a keyboard through a set of speakers. Everyone thought that jets had really been hired to fly overhead for the party, said Vande Gutche with a laugh.

In the late 1980s, Van Denend and the alumni office assumed the role of planning the birthday parties for John Calvin and more and more people came to celebrate the occasion. Alumni and their families attended the party as it coincided with Summerfest, an event that brought Calvin graduates back to campus for classes and other activities in the late 1980s and 1990s. In more recent years, visiting scholars from the Seminars in Christian Scholarship have added between 40 and 60 more guests to the crowd.

This year’s two-minute lecture will assume a slightly different format: an interview. During the interview, Maag will serve as translator for John Calvin, played by French professor Otto Selles.

All of this comes as the worldwide community of John Calvin scholars and devotees prepare for the reformer’s 500th birthday in 2009. The Calvin College and Calvin Theological Seminary community, too, prepares for this special birthday and will be hosting numerous events in honor of the man for whom it is named. Planned events include a January Series lecture, a colloquium, a special birthday party and hymn sing, an art exhibit and an Artist Series event featuring the alumni choir and a guest organist from the Netherlands.

Vande Gutche, now retired and living outside the Grand Rapids area, hopes to make it to the party for John Calvin’s 500th birthday next year.

“I just hope it hasn’t become too formal!” he said with nearly John Calvin-like seriousness. 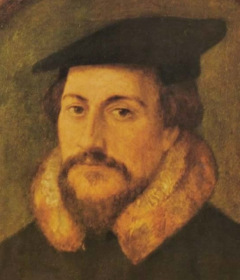 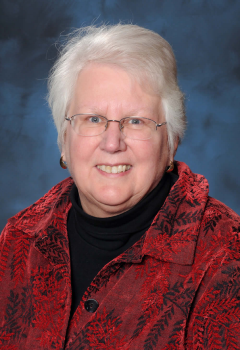 We are compiling a list of all Calvin community members who share a July 10 birthday with John Calvin. If you were born on this blessed day, please e-mail arg2@calvin.edu with your name and Calvin status (i.e. current student, professor emeritus, alumna). And watch out next year.