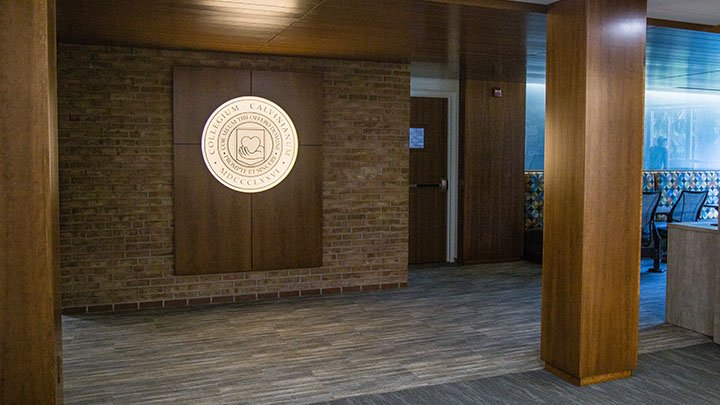 During summer 2017, a corridor in Hiemenga Hall underwent some significant renovations. The space now features student study areas, beautiful wood detailing and the addition of more natural light. Craig Hanson, a member of Calvin’s interiors working group, said the team wanted to update this crucial pedestrian thoroughfare, which connects the Chapel and the Hekman Library, while still highlight the existing features of the hallway.

“We were interested in finding interesting architectural elements and highlighting them,” said Hanson. The hallway already had transparent panes at the top of classrooms with a lovely detailing of wood. “We wanted to make things like that pop in a way people may not have noticed before,” he said. This idea can be seen in some of the horizontal wood elements throughout the hallway. The interiors working group also featured many of the original brick elements of the hallway in a prominent way.

“We have a very organic form of architecture across the campus,” said Hanson. “The campus is built into the land rather than on top of the land.” While Hanson said they are not trying to make the campus look like it did in 1977, they are trying to complement Bill Fyfe’s original plan for a 2017 campus.

“Part of the goal of taking down two walls and creating new study spaces was to bring in more natural light into that hallway,” said Hanson. “That natural light, in turn, provides an opportunity look outward.” A corridor that was very tunnel-like, now really breathes and claims the natural element of campus, he said.

“I am really interested in how Calvin’s brand is communicated in subtle and nuanced ways,” said Hanson. “How do you just walk through a building and know, this is Calvin and feel really good about that?” The space prominently features Calvin’s traditional Latin seal. While the classic seal highlights the heritage of the college, the etched, back-lit glass feels clean and fresh.

“In terms of design, we were always interested in how we could establish a sense of rhythm in the hallway experience,” said Hanson. The design team decided to play up the original pillar supports, built into the wall. Highlighting those, the space is now broken up into three sections. “We tried to establish a sense of pacing as you walk the hallway,” he said.

Kristen Ambrose, from Ayers Saint Gross (ASG), was instrumental in restructuring the classrooms and the corridor, said Hanson. “We were looking for someone who does innovative work in terms of new classrooms. It turns out Kristen Ambrose is an international expert on classroom design,” he said. Since the college has worked extensively with ASG on the master plan, it seemed like a natural fit to bring Ambrose in for this project, explained Hanson. He sees Calvin working with Ambrose on making other classrooms into more usable spaces in the coming years. Locally, GMB provided crucial coordination.

Three of Hiemenga Hall’s older classrooms will become two larger classroom spaces in the coming months. This expansion will be done to enhance the student experience, said Hanson. He does not see the classrooms being used to pack more students into one classroom, rather, it will allow each student to have more space to learn.

In the coming weeks, new lighting will be installed in the hallway. Hanson anticipates the space being even more activated than it is now after the fixtures are installed. 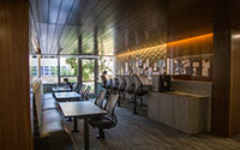 One of the newly created study spaces in Hiemenga Hall 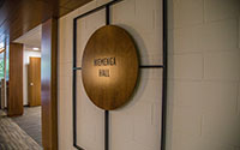 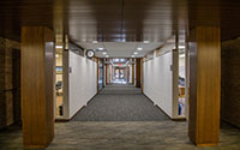