A rare avenue in pursuit of immune system understanding 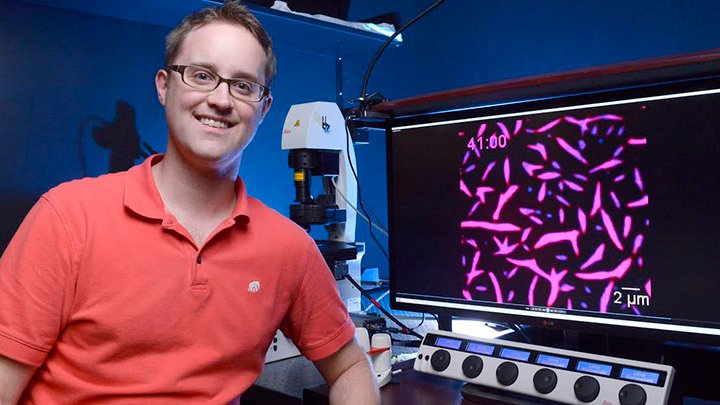 Jon Ditlev ’03 had research work cut out for him long before coming to Calvin. “From as early as I can remember, I’ve been interested in human biology. In high school, I took biology freshman year and AP biology my senior year. It fostered my enjoyment for research in Dr. Ubels’ lab,” he said.

After researching alongside biology professor John Ubels at Calvin and graduating with his bachelor’s in biology, Ditlev joined a lab at the Van Andel Institute in downtown Grand Rapids. He then began attending the University of Connecticut for his Phd, where he had an unlikely job connection.

“Basically, I got to UT Southwestern because I ate lunch with my future boss,” he said. “I went to lunch with him and when I was about to graduate from University of Connecticut, I emailed my boss here and asked if he had any positions in his lab, and he did, so I came and joined his lab.”

At UT Southwestern Medical Center, he is currently using biochemistry to understand how the immune system responds to infections, and how kidneys form the filtration barrier that filters blood. He typically spends his mornings conducting experiments until noon, then possibly catches a seminar and eat lunch and continue with his experiments until dinner.

Ditlev’s fourth publication just came out in April 2016, comprised of two and a half years of research and six months of writing. He is a middle author for seven other papers as well.

“The paper was really groundbreaking in that it was one of the first papers to use biochemistry to understand an entire signaling pathway in the immune system. What we did was look at how proteins work together to take a signal from the membrane and produce a cellular output,” he said. “It gives us an understanding of how the proteins in the immune cells work themselves.” Ditlev is working on three other projects that he will be writing papers on as well.

As a scientist, Ditlev has especially enjoyed his time working the past three summers with fellow scientists from around the world for six-week projects at the Marine Biological Laboratory in Massachusetts. “It’s been a neat experience to see the different cultures and ways that people work in the lab, and to be able to work in that kind of an open environment,” he said.

Although Ditlev has gained a great deal of knowledge since graduating from Calvin, it was his lab work with Dr. Ubels’ that built a solid foundation for the research ahead.

“One of the biggest things that I took from Calvin was the ability to think through problems in a logical manner,” he said. “Coming out of high school, you learn facts but you don’t learn how to think about the facts. At Calvin, and especially in Dr. Ubels’ lab, I learned how to think and how to discern what was important.”

Since Ditlev has been interested in human biology for as long as he can remember, he hopes that Calvin students will explore areas of study that interest them. “It’s important to explore areas that you enjoy, where your [work]day isn’t a drag for you,” he said. “It’s easy to lose sight of your purpose. Don’t lose sight of the bigger picture of life, the picture of humanity and God’s plan for the world.”