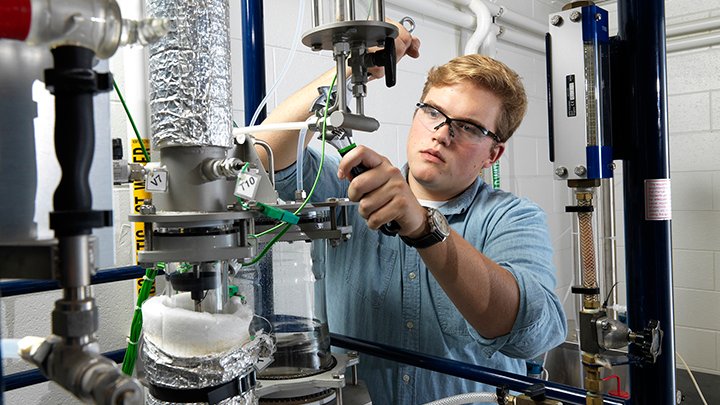 Contrary to popular belief, confidence in your career path doesn’t always come by junior year in college—even if you’re an engineering major.

This was the case for Josh Wright ’16, who during junior year was still unsure of his engineering major and German minor decision. “For the first three years at Calvin, I wasn’t sure I wanted to be a chemical engineer,” Wright said. “I thought that if I don’t get the right major, my vocation is screwed up for the rest of my life. Which isn’t true—your vocation is more than your major and your job.”

After this period of uncertainty, Wright gained confidence in his decision during his summer 2015 research internship at Boehringer Ingelheim, a pharmaceutical company in Germany. It was this internship experience that solidified his passion for chemical engineering, making him a bit more prepared for his senior design project with his project team, “Team Linezolid”.

Team Linezolid designed a process to synthesize linezolid, an antibiotic, in a flow system using the green synthesis process currently being used in industry. According to Team Linezolid’s page, this new process reduces costs in labor and manufacturing, and will hopefully reduce the selling price for the active ingredient.

Wright appreciated his team and the senior design project experience as a whole. “We had a great team with different strengths to play off,” he said. “I really liked doing something I’ve never done before, too.”

Now that Wright has finished his time at Calvin, he plans to pursue his Phd in chemical and biomolecular engineer at Notre Dame University. In fall 2016 at Notre Dame, Wright will be taking classes and teacher aiding in the fall, and beginning his three-year project with a professor in the spring.

Wright is excited for this opportunity, even though graduate school hasn’t been on his radar for very long. “After the summer [2015] internship, I still wasn’t positive I wanted to be a chemical engineer. But then, I was at a career development event at Amway and Professor Wentzheimer said I should go to grad school in the fall. He made a really good case for why grad school would be a good fit for me and I wouldn’t have gone to grad school without that conversation,” he said.

Wright believes Calvin prepared for his future in engineering as he learned to work hard and gain interpersonal skills. “My mind has expanded from different liberal arts classes, [which] will pay off in huge ways in the field,” he said. He also appreciates his experiences singing in gospel choir, teacher aiding, serving as the fundraising coordinator for Engineering Unlimited, and crossing off being a barista at the Fish House from his bucket list.

“At Calvin, you’re being prepared for your field, and for life in general. That’s just not a thing at a big research university,” Wright said. “At Calvin, you learn how to be a citizen of the kingdom of God, not just preparing for your job.”

After working in industry for a while, Wright hopes to eventually become a college professor, preferably at a Christian institution. He hopes to mentor students as well, as he had great personal gain from relationships with his professors.