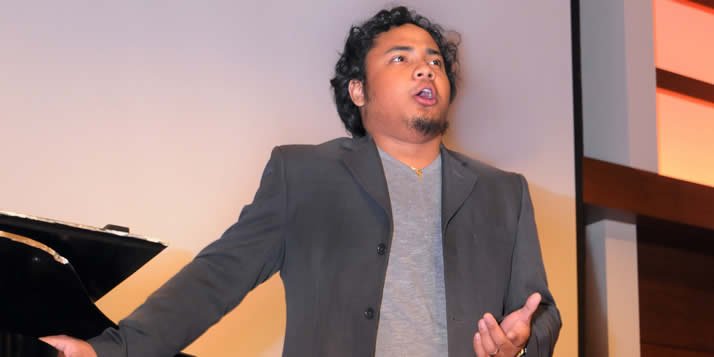 A Calvin senior will take on the role of Rodolpho in the Opera Grand Rapids performance of La Boheme.

Rodolfo, the bohemian poet from the opera La Boheme, was a first role sung by Luciano Pavarotti 50 years ago in his operatic debut. That’s one of the things Calvin senior Fitah Rasendrahasina likes about the role: “Rodolfo is a poet and has a very free and emotional, yet funny, character,” he said. “He is a sentimental guy. He is creative, thoughtful, passionate and believes in what he is doing despite the financial struggles he has to deal with.”

This May, Rasendrahasina will sing the role of Rodolfo in the Opera Grand Rapids performance of La Boheme. “It is pretty much intimidating,” the Madagascar-born music major confessed. “It's one of the biggest companies in Michigan. The lead singers are all experienced. Also, La Bohème itself is intimidating and demanding.”

Rasendrahasina is trying to keep the opportunity in perspective. This is not his first role with the Grand Rapids company. In 2010, he sang a role in Opera Grand Rapids’ production of Giacomo Puccini’s Manon Lescaut. “Your age or status doesn't really matter,” he said. “Once on stage, we're all adults and professionals.

To prepare for Rodolfo, Rasendrahasina is doing a detailed study of La Boheme, the story of a group of Bohemian artists in 19th-century Paris—and the story of Rodolfo’s love for the seamstress Mimi, who succumbs to consumption at the opera’s end. “La Bohème is more than a novel or an opera,” Rasendrahasina said.  “It's a history; it’s a description of an immortal lifestyle. I also love the music. It's rich, very passionate and one can learn a lot about Puccini from it.”

Rasendrahasina is the son of two theologians from Antananarivo, the capital of Madagascar, where his parents still live. He once hoped to be a lawyer or a diplomat (his first three years of college education were at the University of Madagascar where he was pre-law), but now plans a career in music. After graduation in 2013, he hopes to attend a conservatory and, after that, to sing: operas, to be sure, but also oratorios, musicals and other forms of lyrical singing.

"He's got a gift," Lyall said simply. Rasendrahasina agrees, but with a caveat. His gift, he said, is from God. When he performs, Rasendrahasina said, he often feels as much theologian as singer. He remembers his early singing days in Madagascar, singing in the youth choir at his church or singing harmony during a service with his father, "a beautiful tenor," on one side of him and his mother, "a beautiful soprano," on the other. He would get a feeling during those times of "being someplace else, being close to God." Now when he sings, he works hard to remember and recreate that feeling for both himself and his audience.

"Martin Luther said that after theology comes music," said Rasendrahasina. "I really believe that. As a musician I am a theologian too. Music is something supreme; it's something that reaches the soul. Music takes you to another dimension, somewhere else probably close to heaven … I can't explain the power of music, but I know it, and I believe in it."

Rasendrahasina first heard of Calvin when his dad, Lala, was a student at Calvin Theological Seminary and the family lived in Grand Rapids for a year. The family attended Woodlawn Christian Reformed Church, which meets on the Calvin campus. After the government of Madagascar was overthrown in a 2009 coup, the family fled back to Grand Rapids for refuge. Rasendrahasina joined the Woodlawn CRC choir, where his fellow choir members were stunned by his gift and began to conspire to get him to Calvin. In the fall of 2010 he enrolled.

He hopes someday to sing, teach and travel, working for change in his native country and elsewhere: "Music is one of the most powerful ways I know," he said, "to encourage and empower people. The power of music is for everybody. I'm not sure where it (music) will take me," he said, "but I know God has a plan for me, and I trust what the future will bring." 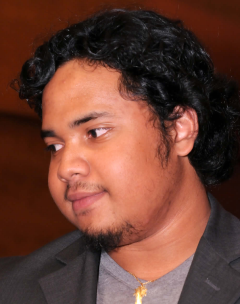