A gathering of firsts 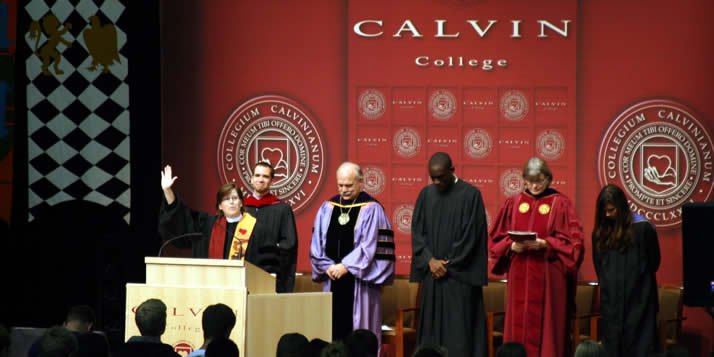 Calvin's Darlene Meyering, chair of the Convocation committee, thought the music added an important touch to the festivities.

"There's a lot of excitement at the start of the school year and a lot going on," she said, "so we thought the different musicians stationed around campus would help remind people of Convocation and draw them to the arena."

Come all you people

As Calvin worship apprentices playing bass and electric guitar and drums on the stage at the east end of Van Noord Arena transitioned into a Zimbabwe anthem called "Uyai Mose" ("Come All You People"), the lower bowl bleachers and seats on the arena floor slowly, but surely, filled with students and staff. And as the praise team's last notes faded away, the strains of brass and organ rose to fill the arena for the faculty processional.

Entering the arena from the east side, the faculty marched westward down two aisles alongside the arena floor before taking their seats around the perimeter of the floor, effectively encircling the first-year students with a professorial presence. With all of the participants thus situated, the service began.

Calvin president Gaylen Byker and Student Senate president Ben Shoemaker gave words of welcome, and then Hulst took to the podium to speak to the Calvin community about "Calvin Peanut Butter Cups," a modern metaphor for Calvin's long-standing mission to be both distinctively Christian and academically excellent. For Hulst such a mission is a little like a Reese's peanut butter cup with its seemingly incompatible combination of peanut butter and chocolate.

After some words of welcome, especially to first-year students, Hulst got to the task at hand: unpacking the idea behind a college which tries to provide a faith-based education that does not sacrifice academic quality.

Mission in a peanut butter cup

"Some of you were looking for a place that would challenge you academically,” Hulst said, looking at the first-year students seated in chairs on the arena floor. "Some of you really wanted a Christian college.”

"To them, the chocolate of Christianity is sweet and light and sugary and has no place near their peanut butter," she said.

But, she quickly added, there are also Christians who think that broad explorations of the world are dangerous. To them the chocolate is the thing. To ruin it with peanut butter makes no sense.

Hulst, like generations of Calvin professors and students, said that education does not have to be an either-or proposition.

Afterwards new students said they enjoyed the talk, and the ceremony.

"I thought the peanut butter cup analogy was really clever," said Michael Nedd, a transfer student from Grand Rapids, who admitted to being "a little nervous, a little excited" for the start of classes. First-year student Travis Unema of Lynden, Wash., also liked the peanut butter cup analogy—"kind of cool" was his succinct summation-adding that he was eager to get started with classes, but already enjoying being part of the junior varsity soccer team (which, he noted, had already won two games).

Many hands and voices

Convocation committee chair Meyering also was pleased with the way the event came together, noting that more than 100 Calvin faculty, staff and students participated in the service as speakers, musicians, greeters, tech support and more.

"It truly takes a community to do Convocation," she said. "Especially this year as we tried to bring a new flavor and a twist to things," she said, "even in how we called people to the gathering. I thought it was a good event, and I thought Mary's talk was inspiring and accessible. It gave the first-year students a better sense of who we are, that we are His people. So, all in all, a good start to what we hope will be a good year."