A familiar game, a new outcome 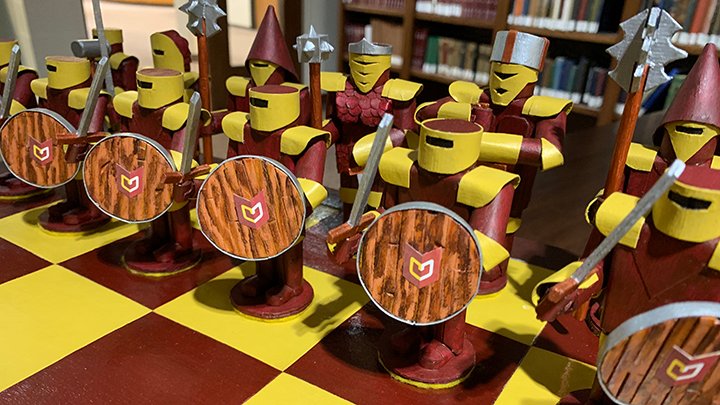 In the game of chess, if you are trapped in it, you’re out of moves: your game is over.

Inside correctional facilities across the country many inmates find themselves stuck in checkmate.

Severely poor choices have them backed into a corner, with no moves left, and no way out.

Literally stuck … with no hope.

But, something’s different these days at the Richard A. Handlon Correctional Facility in Ionia, Michigan. A cohort of 100 men no longer see themselves out of moves.

Now in its fifth year, the Calvin Prison Initiative (CPI)—a program that through a partnership between Calvin University, Calvin Theological Seminary, and the Michigan Department of Corrections offers a bachelor of arts in faith and community leadership to inmates—has helped these men see a way out, or maybe more accurately see a way forward.

Todd Cioffi, the director of CPI, recalls the words of one of the Handlon students who has served 26 years.

“I can’t believe I’m a part of it [CPI], I have my acceptance letter in a plastic holder right by my bed. I’m now 45 years old, and this is the only piece of paper that I’ve ever received that starts out positively about me. It says ‘Congratulations, you’ve been accepted into the Calvin Prison Initiative.’”

The students see CPI as a gift—and Cioffi says that has led each of the Handlon students to respond with gratitude.

“They always surprise us with their giftedness, sense of gratitude, it just never ceases,” he said.

The latest gift from students in the CPI program is a beautiful, handcrafted chess set, representing 775 hours of labor over 15 months. Each of the pieces looks like it was carved out of wood, but is instead made out of compressed cardboard, cardstock, felt, acrylic paint, and Elmer's school glue. Approximately 2,700 pieces were cut out in designing all the intricate details for the set.

“Despite the obvious connection to the Calvin Knight mascot, the game of chess is a demonstration of the obvious ways we can move throughout life,” reflected the student who was the principal architect of the chess game. “Some of the moves we make are losing moves, but for me, the CPI program is like pushing my last pawn in order to recapture the queen, thus, restoring my strength.”

For some of these men, the game has changed significantly over the past few years. In fact, 14 of them are on pace to receive bachelor’s degrees in May 2020—the first ones earned behind bars in the state of Michigan. And for all of these men in the CPI program, their next move is illuminated by hope.

“Calvin has blessed all of us with the amazing opportunity to be a part of its community, and I wanted to express my gratitude in a tangible way,” said a CPI student who presented the chess set to Calvin leaders at the Convocation ceremony earlier this year. “Our hope is that this will be enjoyed as more than a display piece, and when you see it, we hope you will remember the men whose lives you have impacted in such a positive way.”