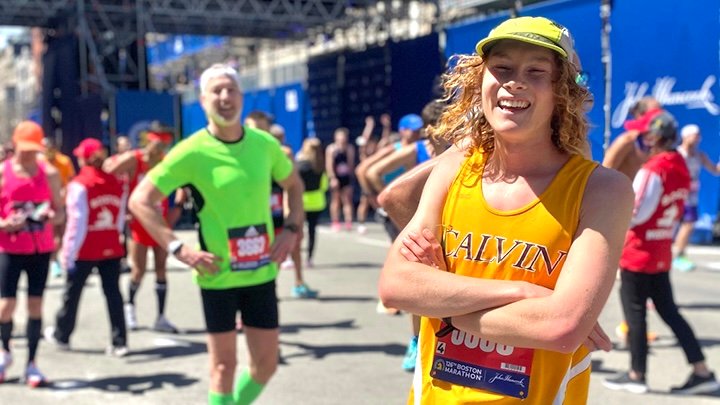 On April 18, sophomore Jesse McCurdy joined a group of 24,000 runners to attempt something that was on his bucket list: completing the Boston Marathon. After three hours and four minutes on the course, McCurdy, clad in a Calvin jersey, did just that.

“There were a lot of different emotions when I crossed the finish line,” said McCurdy. “One is just the deep blessing of getting to join a community of people who have had the opportunity to run the Boston.”

Community is not something lacking in McCurdy’s life, and he’s grateful for it. Five of McCurdy’s Calvin friends were at mile 16 with signs to cheer him on before the mountainous stretch of the race. At mile 25, McCurdy’s family was there to cheer him on through the home stretch.

“Relationships give me so much joy, fuel, and drive,” said McCurdy. “One of my favorite parts about running is how it is a catalyst for community and relationships. I’m grateful that the Boston weekend was a celebration of so many relationships that give me passion in daily life. Getting to celebrate that in the context of running was really exciting.”

Seeing the city of Boston come together to cheer on runners, no matter their speed, was also inspiring.

“It’s a good reminder that sometimes just taking the next step is what’s important even if it’s not at the pace that I had previously imagined,” said McCurdy. “And it was fun wearing a Calvin jersey because some people recognized Calvin University and others just thought my name was Calvin. Either way, they were all yelling ‘Go Calvin’ to encourage me which was a blast.”

A Family of Runners

McCurdy’s older sister, Michaela, was achieving her own Boston Marathon dreams that day by finishing in 3 hours and 28 minutes. The two siblings have found running as a way to connect even while they live apart. During the summer of 2020, they plotted their own marathon course and ran it around their hometown of Anderson, Indiana. Individually, they both started dreaming about qualifying for the Boston race. They trained together over the summer and then ran the Last Chance BQ.2 race in Grand Rapids, Michigan.

“It is really, really special that my sister and I both qualified for the Boston this year,” said McCurdy. “We love running together when we get the chance. I don’t get to see my sister in person as much anymore and we’re really close. Running is a chunk of time that we are together and get to catch up on a lot of life during our long runs.”

Running in the McCurdy family is not only limited to the siblings. Growing up, McCurdy often ran 5Ks with his family. His grandparents also played a role in inspiring their attempt at the Boston. His grandpa ran the Boston several times.

“Along with my grandpa, my parents and my sister are some of my biggest inspirations,” said McCurdy. “I’m often reminded that they were present to not only support me, but to also give me guidance and shape me to be who I am now. I see a lot of the good work that my parents do and the way that they love people. I think that shapes my faith and my passions for medicine and people; it also inadvertently encourages my passion for running.

Driven to Explore His Passions

For McCurdy, a biochemistry and religion major on the pre-med route, who is also in the honors program, works as a Calvin tour guide, and acts as the Barnabas for his dorm, finding time to train for a marathon was a challenge.

“I love campus involvement,” McCurdy said with a laugh.

A consistent schedule to his week helps him maximize his time, but he is also learning to have flexibility with it to be more present for others in his life and for himself.

“I’m learning that it's okay to relax my tight grip on those rhythms because it is more sustainable,” said McCurdy. “If someone is hurting and needs me to be with them, or I need to take something slow to enjoy it…those are the moments that it’s worth changing my schedule a bit.”

As his pre-health advisor on campus, Professor Teri Crumb has known McCurdy to be driven to pursue his passions, even if it takes him down a new path.

After sharing Proverbs 16:9 with him recently, Crumb said, “We talked about God’s timing and being patient for His plan to unfold in our life. This resonated with Jesse. He is driven and passionate about his education and service towards others. Jesse is learning about God’s plan for his life which includes moments of waiting. I would love to fast forward a few years, just to see where his feet land.”

A Tool for Handling a Busy Life

McCurdy has found that running is often just what he needs to help him process all that he is learning and thinking as a student.

“Running for me is time to rest, reflect, and recharge,” said McCurdy.” I see it as my form of personal rest and worship a lot of times.”

He’s also found running to be a way to connect with his surroundings in a unique way. While learning about the history of racism and red lining in Grand Rapids in one of his classes, he realized that his training route often led him down the very streets that he was learning about in his class.

“In the busyness of school, I don’t have time to just think about doubts that I’m having about things I’m learning in classes, or about how my relationships are going,” said McCurdy. “Running is one of those times that I just let my mind kind of wander, process, and think.”

“It’s like letting my mind be in this present body in this present moment,” said McCurdy with a big grin on his face. “The world is too good to miss the moment that’s happening around you right now.”