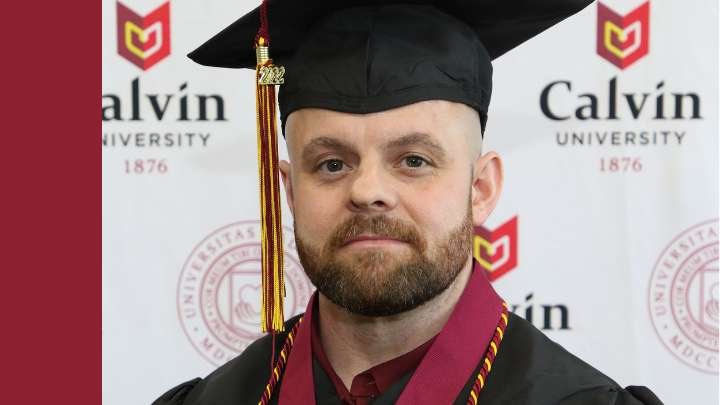 On May 9, 2022, Curtis Frye graduated with his bachelor's degree as a member of the third cohort of the Calvin Prison Initiative.

Standing in his cell with a rope around his neck, Curtis Frye began to pray.

At that moment, his cell door broke open.

What happened next seems unbelievable, but it would change his life forever.

Creating and protecting an image

Frye grew up in a neighborhood ridden with violence and he was a lot smaller than kids his age.

“I learned from a young age that I got accolades from a lot of the older kids in the neighborhood from acting out, acting crazy.”

He got wrapped up in this self-image.

“It got to a point where I had this self-image that I was going to uphold by any means necessary, and when that was challenged, I’d do whatever to protect who I was,” said Frye.

So, one night in 2000, after a long night of drinking, Frye got into an altercation with some guys driving down the road. And, to protect his “tough guy” image, he pulled a gun.

Frye’s fatal decision led to a second-degree murder charge carrying with it a life sentence.

Months later, Frye was alone, confined to a single cell for attacking another inmate. He was only allowed out for a half hour every other day to use the shower or phone. Frye had given up hope.

That’s when his door broke open. Scrambling toward the door, he stuck his head out, saying angrily “what do you want?”

The officer said, ‘step out, the chaplain is here to see you.’

The officer said, ‘no, put your stuff on and step out.’

Frye put his clothes on, walked down to a little vestibule, and saw a little old man.

Frye repeated what he said to the officer and in a similar tone: “what do you want?”

He recalls the chaplain, who he found out later was named Bill, saying ‘I don’t know, it’s not even my day to be here. I felt God was telling me to call you out.’

At that moment, Frye broke.

“Yeah, it was too much for me. We didn’t even talk. We just sat there.”

A few minutes later, an officer came down, pulled Frye out, and said you have a visitor. Prior to this point, Frye had known visits to only be made through thick glass. “My mom and aunt were standing there, and I got to hug my mom for the first time in nine months, and it was just enough hope to keep going.”

That moment in 2000 marked Frye’s justification. He started to read the Bible and pray, but “my sanctification took much, much longer, and it’s still going,” said Frye.

He would be moved from facility to facility, spending time in segregation along the way, for violent acts. At age 26, sitting in segregation with just himself and a Bible, he took a long look at himself.

“I spent time looking at who I was, my values, beliefs. I realized I was selfish my entire life. All I did was ruin lives, didn’t care about anyone but myself,” remembers Frye. “I didn’t like what I saw. And it was there after I rode into the next facility that I think God created some fertile soil for change. I didn’t know what that was going to look like, but I think I was ready.”

A taste of education

It was there at Lakeland Correctional Facility in Coldwater, Michigan, where Frye ran into an old buddy from prison who had turned his life around.

“That was a big turning point, pivotal point in my life,” said Frye.

His buddy encouraged him to take a correspondence course, so Frye did. It was a psychology course offered by Louisiana State University. He loved it, enjoyed the material, and was getting good grades.

So, he continued on.

“I think that was a time when I was able to look outside myself at other people and appreciate the people around me and care more about people,” said Frye. “Before that I thought of working on myself, but the true transformation came from looking outside, when I looked and saw all the people that I hurt, all the lives I ruined, how selfish I’d been, how I hadn’t cared about people who cared about me. When I changed my focus, that changed me.”

And that changed his actions. He started to curate community with other men who were interested in education. What he was doing was countercultural to the prison setting, trying to do positive proactive activities, peer-to-peer classes, help other guys do positive things. It was a hard road, pushing back against the culture of prison, but he described his situation at Coldwater as “a very comfortable place to be if you were in prison.”

It was during this time that he heard rumblings of the Calvin Prison Initiative (CPI) from a fellow inmate Troy Rienstra.

“Yeah, that’s at MTU (Handlon Correctional Facility), nobody wants to go to MTU,” said Frye, who said MTU had a reputation for violence, gang stuff, very controlled movement, and a lot of lockdowns, “basically as far as facility goes, you just didn’t hear anything good about it.”

After a couple of cohorts had gone through the CPI program, Frye had his 17-year lifer review, which came with a change in perspective. “When I came back [from my review] I had another epiphany moment. God said you gotta stop worrying about being comfortable in prison and worry about becoming that person you need to be.”

So, he listened, and he left the comforts of Coldwater, and headed to Handlon.

What he found at Handlon was an opportunity to marry his two passions, his love for education and his love for Christ. He found the Calvin Prison Initiative and the community that would continue to shape him.

“A lot of the guys I’d been taking classes with [at Coldwater] weren’t believers, because to them it was illogical, but I spent a lot of time defending my beliefs, almost like half-straddling the two spheres,” said Frye. “When I came here, I didn’t have to do that, it was already meshed, inherent in the classes. They taught how what you are learning relates to the Biblical narrative and to creation and to God’s mission for us.”

And they taught, in person, which Frye said is exactly what he needed.

“Just trying to take correspondence classes by yourself, I wouldn’t have made it,” admitted Frye “To have people who are good law-abiding people, no less good Christian people and who are willing to come in here and spend time with us who have been given our chance with society and chose to throw it away. For them to come in and talk to us as equals, as human beings, that is very, very formative,” said Frye.

It was this community that was in stark contrast to the ones he had experienced up to this point. Quoting from Ralph Waldo Emerson, he said:

In May 2022, Frye received his bachelor’s degree from Calvin University through the Calvin Prison Initiative program. Calvin University, Calvin Theological Seminary, and the Michigan Department of Corrections spared no pomp and circumstance for the grand event.

“Graduation will forever be etched in my mind,” said Frye. “That is my greatest accomplishment I’ve ever achieved in my life, and arguably one of the only things worthy of note that I had ever done in my entire existence.”

Frye, now 40, is using his Calvin education behind bars. One tangible example he recalls is in his role now as a tutor for the trades in the CNC shop. Frye says, unlike in the CPI program, many of the guys taking these classes are not hungry to learn. When the first test came back and all but two of them failed, his supervisor asked Frye to help. So, he put his Calvin education to work.

“A couple of the guys got frustrated, and so I immediately harkened back to the soft skills I learned in pastoral care and social work to talk to those guys, to build their confidence, change their perspective, to focus on their strengths, on the things they did well instead of focusing on how terribly they had done,” said Frye. “So, I used some of the strengths’ perspectives in social work and I saw immediately how my degree from Calvin bolstered activity in other fields and in other areas.”

His degree and the community he has been a part of in the Calvin Prison Initiative has only reinforced his changed identity.

“I think that before I derived my value as a human being from what other people thought of me, but now I derive my value from the fact that I am a human being made in the image of my Creator. That I have inherent value, that my value comes from Him.”

All of this has led him to reflect with gratitude.

“An attitude of gratitude is not just a fleeting thing, not a noun, I think it’s an embodiment, it’s a way of life,” said Frye. “There comes a point where you have to make a decision: are you going to be miserable or are you going to move on? I found that being grateful for any little thing, whether it’s a cup of coffee I have in the morning or the presence of a good Bunkie (cellmate), when you have an attitude of gratitude it makes the big things so much greater.

“I think people would get along better and there would be a lot less problems if more people had the attitude of gratitude.”