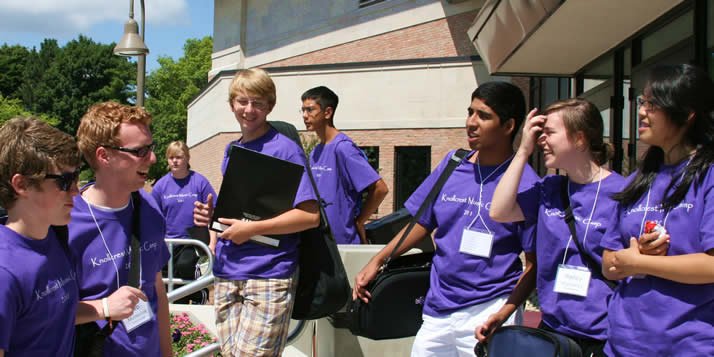 After four decades, Knollcrest Music Camp continues to evolve, becoming more rigorous as it holds on to its long tradition of expert teaching and fun.

On August 3, the third day of senior high week at the Knollcrest Music Camp, percussion instructor Matt Beck stopped practice for a lesson on how to finesse the bass drum. “With any large instrument, it depends on controlling the sound. If I really need a lot of muffle,” he said as he grappled with the drum, “I’ll put my left leg right there.”

Half an hour later, Beck’s percussionists were rehearsing “Rough Riders” with the concert band. Calvin College music professor Tiffany Engle set the tempo and cued up the march at measure 22:

Engle cut the music with her baton, shaking her head: “Okay, we’ve got a lot of work to do.”

The week before, Engle, now in her second year as director of the camp, was preparing for the inrush of high schoolers, 150 from around West Michigan. “Just to see their excitement and their enthusiasm as they experience music in new ways, and to be a part of that, is exciting,” she said. “It’s fun. It’s tiring—but it’s fun.” Between the senior high week (August 1-5) and junior high week (August 7-12), this year’s attendance was approximately 350.

Watching how each student’s skill improves between Monday and Friday is one of the most rewarding aspects of the camp for Engle. “That’s a testament to the teaching that goes on here,” she said.

Dedicated to the music

Now in its 41st year, the camp is evolving: Engle and the other administrators have changed the daily schedule in order to make the senior high camp more rigorous.

This year’s musicians had five more rehearsal periods than last year’s, spending the majority of their time in concert band, orchestra or choir. The idea is for the camp to reflect the emphases of Calvin’s music department. Much of that rehearsal time was devoted to Mussorgsky’s “The Great Gate of Kiev.” On performance night, both band and orchestra would perform it together under the direction of Professor Robert Nordling.

When the musicians and vocalists were not rehearsing their large ensemble pieces, they gathered in the Recital Hall to hear and perform the music of Shostakovich, Handel, Fauré, Steven Sondheim and others. For the remaining two periods of the day, they delved into the more idiosyncratic troves of musical study, including music technology, mariachi and the especially popular musical theater, which has attracted around half the senior high students this year.

In a nearly empty Covenant Fine Arts Center, musical theater instructor Pierre Banks stood at the edge of the crowded stage and delivered the lines to “Kids” from Bye, Bye, Birdie as he blocked out the accompanying side-steps and twists: “Why can’t they be like we were, perfect in every way? What’s the matter with kids today?”

This was Banks’ third year at the camp. “I just love it,” he said. “A lot of students, when they do music, they don’t get to dance. … I just love exposing them to movement.”

Violinist Rob Mulderink, who completed his senior year as a homeschooler this spring, has attended the camp for six years; this was his second in musical theater. “I go to this camp because it’s a little bit nostalgic,” he said, “but especially the musical theater side because I don’t get a lot of that otherwise.”

While Mulderink plans to continue playing violin after graduation, he has chosen a different career path. In the fall, he will attend St. John Vianney College Seminary in St. Paul, Minn.

Building on a legacy

The camp has a way of drawing people back year after year. Camp administrator Jennifer Gerwig estimated that 75 percent of the camp’s students attend more than once. The same could be said for the administrators themselves.

Ada Christian School teacher Nancy VanNoord became involved with the camp 26 years ago while a student at Calvin. She started out as the camp librarian. Her main duty was to assemble music folders for each student at the camp, which in the late 80s meant 500 or more folders.

Today, VanNoord teaches saxophone and has served as a camp administrator in recent years. She has seen the camp reach out beyond the area’s Christian schools, change its elective offerings and experiment with its daily format (in the early years, some visiting students spent the week living in Calvin’s residence halls). Though the camp looks different today, its spirit remains the same, VanNoord said: “The most important things are all there. Giving a wonderful musical experience is still central. Hiring great music teachers … I don’t think that’s changed at all.”

As for the more rigorous rehearsal schedule, VanNoord believes it’s an improvement. “If you’re a student coming to camp, and your primary focus is violin, and you’re spending four hours a day practicing it, it’s going to help you play better—in theory at least.”

The beat goes on

On August 5, family and friends gathered in the CFAC for the senior high performance. Offerings ranged from the jazz-rock of Blood, Sweat & Tears to the choral meditation of Mozart’s “Sanctus.” Concluding the ensemble performances, band and orchestra took the stage together. Prof. Nordling walked to the podium, raised his baton, and the music of Mussorgsky’s “Great Gate” began to build.

The five-day-old symphony pulled off what Engle described as “a piece of great majesty and splendor.” Beneath the complexity of the higher strains, Beck’s percussion core drove a steady rhythm, and the bass drum beat unmuffled. 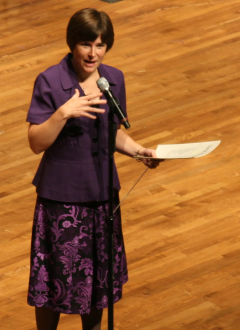 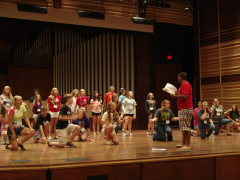