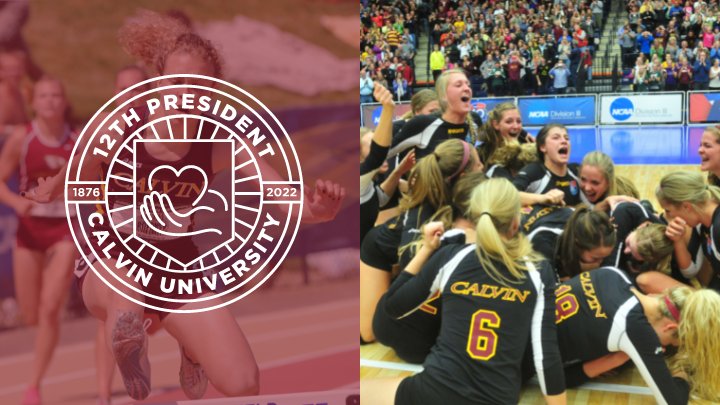 President Wiebe Boer is the 12th president of Calvin University. So, during the month of October, each Monday leading up to Inauguration we are sharing a “Top 12” list. This week’s list features 12 of the most memorable sports moments in Calvin athletics history. Longtime sports information director Jeff Febus curated this list, which is fitting since he's witnessed each of these moments.

Here's the list, which is meant to be reflective, not exhaustive, considering the Calvin Knights have 11 team NCAA Division III National Championships and finished 27 times as national runners-up in eight different sports.

Under the direction of head coach Amber Warners, the Calvin women’s volleyball team captured its second national title, doing so on the home court of its arch-rival Hope College. Playing in front of a sold-out crowd of 3,600 fans at Hope’s DeVos Fieldhouse, Calvin overcame a two sets-to-none deficit in the national final against Cal Lutheran to win the match 20-25, 12-25, 25-22, 25-17, 20-18. The victory came one year after Calvin had fallen in five sets in the national final, ironically in the same DeVos Fieldhouse in a match where Calvin led St. Thomas (Mn.) two-sets-to-none but then lost three straight. In the reversal role in 2013, Calvin fought off one (national championship) match point in the fifth set to pull through for the win. Sophomore Maggie Kamp was tremendous with 27 kills while senior setter Megan Rietema had 49 assists and the match-clinching kill on a shot just inside the Cal Lutheran sideline.

Playing in front of a (then) NCAA III Women’s Basketball single-game attendance record crowd of 2,911 fans, 11th-ranked Calvin upset top-ranked and defending national champion Hope College 60-57. The victory snapped Hope’s 44-game win streak and marked the first-ever loss by the Hope women’s basketball team inside DeVos Fieldhouse, dropping the Flying Dutch to 19-1 inside the facility. The victory and attendance record made the front page of USA Today the following morning. Under the direction of head coach John Ross, the Calvin women’s basketball team continued on to reach the Elite Eight of the NCAA III Tournament later that season.

Competing in the town of Carlisle, Pennsylvania, just a few miles from where legendary Olympic athlete Jim Thorpe honed his skills, the Calvin women’s cross country team broke through for its first-ever national title, finishing with a final team score of 124 points. The national title came after three prior national runners-up finishes by the Knights in the early 1990’s. Calvin used All-America performances from Amy Mizzone, Lisa Timmer, and Andrea Clark, along with strong team depth to finish 46 points clear of the College of New Jersey. The national title was the first of back-to-back national crowns under the direction of head coach Nancy Meyer as the Knights won the 1999 title in Oshkosh, Wisconsin.

Competing at the NCAA III Championships in Holland, Michigan, Becky Weima captured the school’s first-ever national title in swimming and diving history, winning the 200 freestyle in a time of 1:50.29. The national title was the first of five individual national titles for Weima who would go on to earn NCAA III All-America honors an incredible 21 times in her Calvin career.

Competing on a snow-packed course in Spokane, Washington, Calvin broke through for its first national title in men’s cross country. The national title came on the heels of a second-place national finish in 1998 and a fourth place in 1999. Calvin produced five NCAA III All-America (Top-35) finishes in the race led by junior Dan Hoekstra who placed second individually, helping Calvin post a first-place team score of 65 points. The five All-America finishes allowed Calvin to hold off Keene State of New Hampshire which placed second in the team standings with 87 points. The Knights were guided by head coaches Brian Diemer and Al Hoekstra.

Competing on a mud-splashed course in West Chester, Ohio, Calvin produced an NCAA III record six All-America performances led by Tim Finnegan’s second place individual finish. The Knights recorded a first- place team score of 37 points and were led by head coaches Brian Diemer and Al Hoekstra. The national title was the fourth in program history and the third in four years.

Calvin stunned fourth-ranked and perennial national champion Messiah College 2-1 on its home pitch in the Sweet 16 round of the NCAA III Tournament. A goal by Bobby McCaw in the 65th minute leveled the score 1-1. Sophomore Jacob Witte then toe-poked a shot into the back of the Messiah net with 4:22 left in the second overtime session after receiving service off a free kick from teammate Isky VanDoorne. The golden-goal victory by the Knights marked the only loss of the season for Messiah (19-1-3) and helped propel the Knights through to the next round of the NCAA III Tournament. Led by head coach Ryan Souders, Calvin eventually reached the national championship final before falling to Tufts University 1-0 in double-overtime to finish 23-3-0 overall.

Trailing rival Hope by two games heading into a dramatic final three-game home series with their rival, Calvin won all three games in come-from-behind fashion to edge the Flying Dutchmen by one game for the league crown. Calvin took the May 8 opener 10-3 over the nationally ranked Flying Dutchmen behind a complete-game pitching performance victory from freshman sensation Jim Deters and a triple-play by second baseman Mark Jansen. The following afternoon, Calvin defeated Hope 7-2 in the opener of a doubleheader and then 5-4 in the nightcap to complete the thrilling series sweep. Arie Eppinga’s run-scoring single in the sixth inning proved to be the game-winner of the 5-4 win. Calvin snapped a 26-game Hope win streak to open the series. The Knights improved to 28-11 overall with the series sweep and advanced to the NCAA III Tournament with the league title – the second in three years under head coach Jeff Pettinga.

Under the direction of head coach Mike Petrusma, Calvin captured its first national title in men’s ice hockey, defeating the University of Georgia 5-0 in the title tilt. The victory capped four wins in three days for the Knights as they defeated Richmond 5-0, South Dakota State 8-3 on a Thursday, topped second-ranked Arizona State 5-2 in the semifinals Friday before winning the final Saturday evening on the practice ice of the Phoenix Coyotes. The Knights finished 29-1 overall and were led by tournament Most Valuable Player Max Sieplinga who, two years later, would go on to be named the ACHA Division III National Player of the Year.

Calvin junior Renea Bluekamp became the first individual in Calvin cross country history to claim an individual national title, winning the 5K NCAA III Championships race in a time of 17:46. Bluekamp stormed over the final hill at Oakland Acres Golf Course in Grinnell, Iowa, to win the race by a 10-second margin. It helped propel the Calvin women’s cross-country team to a second-place team finish with 93 points with the Knights just 32 points behind first place Cortland State of New York.