The annual Paul B. Henry Lecture brings a prominent Christian political practitioner to Calvin to speak about the interplay of religion and politics. The event is intended to inspire the college and the community to actively seek to integrate a Christian worldview with practical politics and public life. Over the past eighteen years, the lecture has featured individuals from both political parties, speakers from liberal and conservative viewpoints, scholars who have examined current political issues and questions, and prominent leaders of non-profit organizations actively working in the public policy arena. 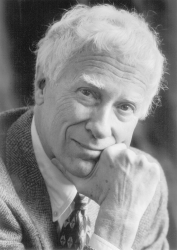 The 23rd Paul B. Henry Lecture featured Dr. Nicholas Wolterstorff speaking on Fidelity in Politics as he considered Christian political activity in the tradition of Reformed Protestantism. He explored the distinctive version of the Reformed Protestant tradition of Christian political thought and action developed by twentieth century Dutch theologian and activist Abraham Kuyper. Kuyper's thought was very influential on the political thought and action of Paul Henry, as it has been on a large number of other theorists and activists. Wolterstorff identified high points of this tradition as it has developed in the United States.

Nicholas Wolterstorff is a Professor Emeritus of Philosophical Theology at Yale University, as well as a Senior Research Fellow with the Institute for Advanced Studies in Culture at the University of Virginia. He has taught previously at Calvin University (Philosophy Department), the Free University of Amsterdam, and the University of Notre Dame, as well as been a visiting professor at several institutions. He has received fellowships from numerous organizations, including the NEH and the Danforth Endowment, and served as president of the American Philosophical Association and on editorial boards.
His writing includes numerous articles and books, including Religion and the Schools; On Universals; Reason within the Bounds of Religion; Art in Action; Works and Worlds of Art; Education for Responsible Action; Until Justice and Peace Embrace; Faith and Rationality (co-author); Rationality in the Calvinian Tradition (co-author); Lament for a Son; and Keeping Faith: Talks for New Faculty.